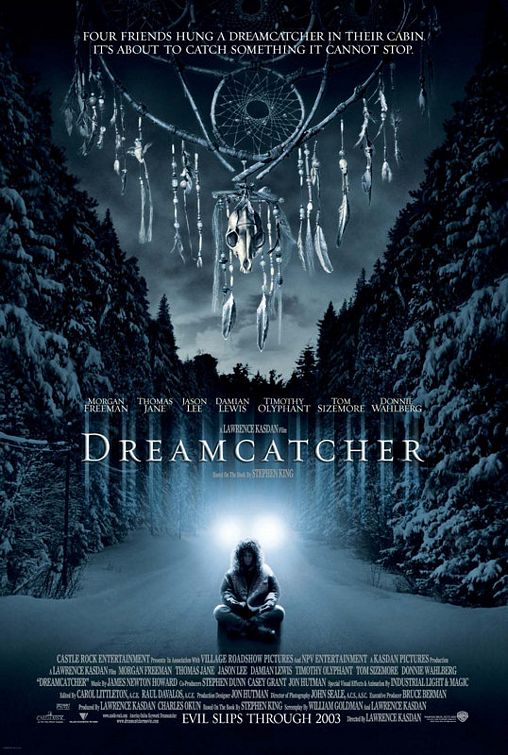 In the award-winning, independent movie, THE DREAM CATCHER, a troubled young man who sometimes steals cars finds himself hitchhiking with and befriending a young juvenile delinquent who's also searching for a better life just as the car thief is. Despite some moral elements and talented filmmaking, THE DREAM CATCHER has a moderately strong romantic worldview that is vaguely socialist, as well as lots of foul language, strong pagan behavior such as much stealing and other irresponsible behavior, and some sacrilegious elements against Christianity.

Moderately strong romantic worldview that is vaguely socialist & humanist & somewhat nonjudgmental, plus some moral elements, such as minor character preaches the salvation message of Jesus Christ, sacrilegious elements & images of occult American Indian religious symbol, a "dream catcher," that become a key metaphor in the story; 92 obscenities & 8 profanities, mostly strong ones, plus some obscene gestures; mild violence such as male carnival workers beat young man unconscious & two robberies at gunpoint; no sex, but references to girlfriend's pregnancy; no nudity; alcohol use & drunkennes depicted; smoking & marijuana use; strong pagan behavior depicted by the two protagonists, but somewhat rebuked by the movie on the whole; at least one obscene visual reference to homosexual sodomy; and, much stealing (sometimes rebuked), irresponsibility & aimless wandering, all of which are depicted as bad in a general, but subtle, manner & tone.

Most of today’s artists seem to have a worldview that combines radical left-wing politics with either a strong atheist or a nominal religious training. This includes many, if not most, artists who may describe themselves as Christian. Government funding of the arts, including independent movies and foreign movies, through forced taxation helps foster this kind of worldview because such funding is an ancient socialist and fascist practice that you won’t find in God’s Word, the Bible. (The religious art in the Bible which God approves and commands, or His people do and praise, seems to be funded by church offerings and individuals voluntarily donating, working, playing, worshipping, and/or celebrating.)

It’s no surprise, therefore, to discover that the new independent feature, THE DREAM CATCHER, which contains a romantic worldview that is somewhat nonjudgmental and vaguely socialist and humanist, was first funded by government monies forced from taxpayers through the federal government’s National Endowment for the Arts, the state of Ohio and the city of Dayton, Ohio (the hometown of the reviewer for this movie, Tom Snyder). Of course, the U.S. Government, Ohio and the powers-that-be in Dayton are never caught giving money to a Christmas Nativity crèche, or (heaven forbid, but not really) a Bible study for Christian disciples, or a Gospel-oriented fiction film by the Rev. Billy Graham’s organization.

That’s not to say, however, that THE DREAM CATCHER has nothing valuable in it, despite its worldview problems and its near constant use of foul language. In fact, its director, Ed Radtke, won the best directing prize at this spring’s Los Angeles Independent Film Festival. Indeed, the movie is a captivating, well-shot and well-written character study that has several positive moral qualities to recommend it.

For instance, the movie shows acts of compassion by several Good Samaritans, including an inter-racial, married Christian couple. At one point, in fact, the Christian husband clearly preaches the salvation message of Jesus Christ (though the husband, like a U.S. Marine soldier who appears later in the movie, is used as a humorous stereotype of a working-class Southern Baptist).

THE DREAM CATCHER also has an overall tone which ultimately seems to rebuke the strong pagan behaviors of its two protagonists, including their aimless wandering. Such aimlessness in life has found them resorting to thievery in order to survive. At the end of the movie, the most immoral and younger of the two youthful protagonists, Albert, gets re-captured by juvenile authorities when he steals one time too many. Meanwhile, Freddy, the older of the two, begins the journey back to Philadelphia, apparently to accept responsibility for the illegitimate child he has fathered with his girlfriend, who talks with Freddy in a series of revealing phone calls.

The two leads in DREAM CATCHER, newcomer Maurice Compte as the gloomy, brooding Freddy and Paddy Connor as the reckless and comical, but blasphemous, Albert, are excellent. Freddy is hitchhiking to Indianapolis to see if his uncle, who owns a store, can give some money to he and his pregnant girlfriend. On the way, he runs into Albert, who’s just escaped from a van load of other juvenile delinquents in Ohio. Freddy tries to ditch the energetic boy, but circumstances help Albert find ways to attach himself to the older Freddy. Albert tells Freddy that he’s traveling to Reno, Nevada where his mom, who abandoned her juvenile delinquent son years earlier, supposedly owns a restaurant. Albert says maybe she can get both he and Freddy jobs at the restaurant, but Freddy is reluctant.

In Indianapolis, Freddy goes to a nursing home to visit his uncle, who turns out to be a little batty and destitute himself. Freddy decides to try getting money from his ex-con father, who abandoned Freddy when he was younger. Freddy’s uncle, his father’s brother, tells Freddy that his father just got out of prison and is working in Oklahoma City. Eventually, both Albert and Freddy’s problems are partially, but not completely or happily, resolved.

Along the way in this road trip drama, Albert’s reckless, devil-may-care attitude frequently irritates Freddy. Albert can be ingratiating, however, and Freddy begins to feel compassion and affection for Albert who, like Freddy, has been abandoned by his parents. Thus, THE DREAM CATCHER becomes a road trip for two lost souls who dream of a better life. They seek solace, however, in the power of men and their own devices rather than those of God.

At one point in the story, an American Indian caretaker of a church, which Albert desecrates by sleeping in one of the choirboy robes, helps them out with food and shelter. Inside his home, a small Indian “dream catcher” artifact hangs over the crib of the man’s newborn daughter. Although no false Indian religion is preached in the movie about the dream catcher, it does become a key metaphor in the story for the dreams of the two protagonists and the problems that occur in their relationship. In reality, of course, dream catchers are an occult symbol for a false pagan religion. They can refer to an impersonal, pantheistic god, a polytheistic worldview of many gods and/or even to demonic spirits. Dream catchers are also often used by pagan New Agers infected by the irrational evil of pantheism, polytheism and demonism. All this makes it even more curious why government agencies would even offer to help fund a movie that goes by the name “DREAM CATCHER.” Whatever happened to government’s silly, erroneous notions of “separation of church and state”?

Thus, THE DREAM CATCHER has plenty of worldview problems and other bad elements, including lots of strong foul language, to earn it a strong negative rating from MOVIEGUIDE® in terms of its moral and theological acceptability for Christians and other Bible-oriented people. We can learn a lot from the movie’s artistic merits, however, although a more satisfying, uplifting ending would definitely increase the movie’s entertainment and artistic quality.