"Too Crude and Clichéd" 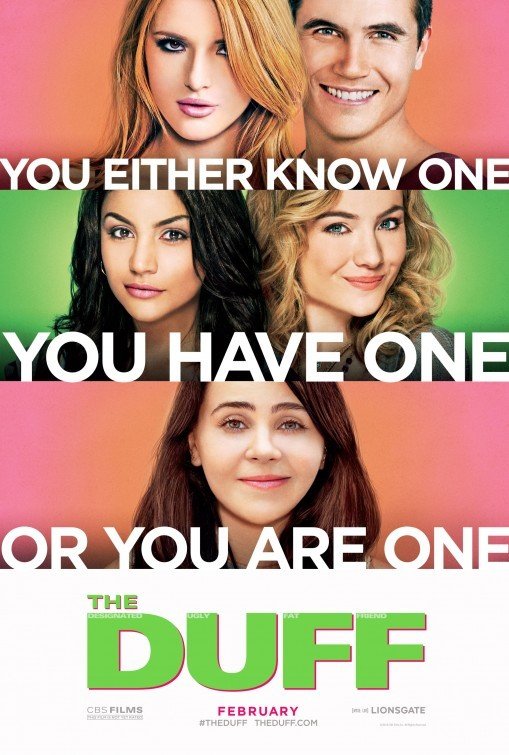 THE DUFF follows Bianca, the tomboyish, nonconformist friend of two popular girls. Homecoming king, football jock Wesley informs Bianca that she’s the DUFF, the Designated Ugly Fat Friend who hangs around prettier girls to make them look good. Bianca asks Wesley for help to change her image so she can become attractive to boys. He takes up her challenge in exchange for tutoring in chemistry, which he’s about to failing. Socialite Madison begins a campaign of cyber-bullying against Bianca when she becomes jealous of her and Wesley’s close friendship. Hard lessons must be learned and prejudices overcome if Bianca is ever to accept herself for who she is.

THE DUFF comes across as the typical teenage fare that Hollywood has produced for the last two or three decades. It does contain some funny moments, but much of the humor is crass and tasteless. Though THE DUFF is rated PG-13, the amount of language alone should require an R rating. In addition, there is a significant amount of crude lewd references. THE DUFF’s content is unacceptable for children, teenagers and media-wise viewers.

(PaPa, B, LLL, V, SS, N, A, MM) Strong immoral pagan worldview permitting the unkind treatment of others without consequence and sexual perversion goes unchecked, but feelings are hurt and there is some remorse depicted; more than 40 obscenities and profanities, many references to male genitalia, male genitalia depicted on chalkboard, girls referred to as whores, slang terms used for female private areas; slap on face, punch to the face, shove against a wall; strong sexual content overall includes implied sex between teenagers, depicted sexual contact with mannequin, teenagers kiss while lying on a table an mimicking a sexual position, kissing couples in various scenes, teenage couple shown in bedroom together in underwear in a porn video satire, sexual language, suggestive dancing shown in public where girl’s underwear is shown; boys in underwear, girl in lingerie, boy shown in only his underwear in bedroom with girl, girl dresses to show cleavage; adult drinks wine; no smoking or drugs; and, characters call each other names, two instances of cyber bullying, kids make fun of each other without remorse, teachers and parents do not hold kids responsible for mistreatment of others, people use other people for self-benefit, purposefully embarrassing others in public, girl’s jealousy causes her to ruin another girl’s reputation.

HE DUFF is a comedy about a high school senior sets out to change her image and the social pecking order when she is labeled as the ugly fat girl among her group of friends. Based on a book of the same name, THE DUFF has some funny moments, but is the typical clichéd high school film with an unacceptable amount of language and inappropriate content.

The story follows Bianca, the tomboyish, nonconformist best friend of two popular girls, Casey and Jess. When homecoming king and football jock Wesley informs her that she’s the DUFF (Designated Ugly Fat Friend), who hangs around prettier girls to make them look good, Bianca balks at the label but then realizes Wesley might be right.

Casey and Jess are stunned when Bianca breaks off their friendship, accusing them of using her to make themselves look better. Meanwhile, socialite Madison has plans to get back together with ex-boyfriend Wesley. Deciding to change her image, Bianca asks Wesley for his help. After all, they are childhood friends and live next door to each other.

Wesley takes up Bianca’s challenge in return for her tutoring him in chemistry, which he was on the verge of failing. With her reputation and his college scholarship on the line, they set a plan in motion. However, their plan is derailed when Madison begins a campaign of cyber bullying against Bianca. Hard lessons must be learned and prejudices overcome if Bianca is ever to accept herself for who she really is.

THE DUFF comes across as the typical teenage fare that Hollywood has produced for the last two or three decades. There is nothing new other than the use of social media as part of the story. It does contain some funny moments, but much of the humor is crass and tasteless.

Though THE DUFF is rated PG-13, the amount of language alone should require an R rating. In addition, there’s a significant amount of sexual references, which are often crude. Even the protagonists adopt behavior toward one another that serves to tear each other down, though this is dismissed as acceptable in the modern age of friendship. The movie’s content is unacceptable for children and teenagers, though it’s marketed toward a teenage audience. THE DUFF is unacceptable.