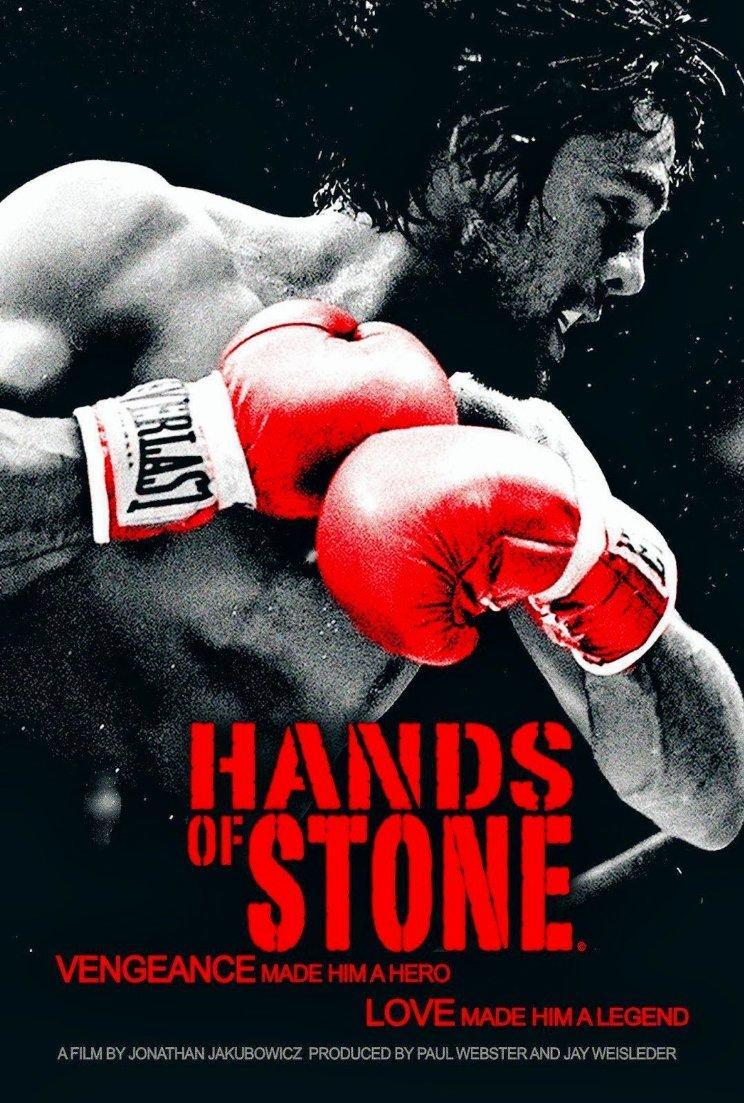 HANDS OF STONE tells the story of late 20th Century boxing champion Roberto Duran. It details Roberto’s trials, tribulations and triumphs from the time he grew up in Panama in the 1960s to his comeback in 1983. Much of the movie details Roberto’s relationship with legendary American boxing trainer Ray Arcel, played by Robert De Niro. Eventually, the movie portrays Roberto’s angry rivalry with Sugar Ray Leonard, who taunts Roberto before their famous first fight by insulting Roberto’s wife. Roberto replies in kind, and their infamous rivalry begins.

HANDS OF STONE is compelling, but in fits and starts. The script could be tighter. Limiting the enjoyment is lots of strong foul language and three explicit bedroom scenes featuring Roberto and Sugar Ray alone with their respective wives. HANDS OF STONE has a strong Romantic worldview where Roberto uses his own willpower and Ray’s training to achieve his dreams. However, some positive Christian, moral elements mitigate this. For example, Roberto redeems himself after a fall from grace in HANDS OF STONE, partly by attending a Christian celebration in Panama. HANDS OF STONE is excessive

(RoRo, C, B, PC, AP, LLL, VV, SS, NN, AA, D, MM) Strong Romantic worldview about pursuing one’s dreams using one’s own willpower, mitigated by some positive Christian, moral elements (including a comment that a man’s boxing talent originates and flows from, God plus a Christian holiday procession in Panama focuses on a statue of Jesus on the cross, a couple scenes of forgiveness and the idea of having children with one’s wife is extolled), but with some politically correct content criticizing America’s treatment of Panama and its people; about 69 obscenities (including many “f” words) and three strong profanities; lots of strong boxing violence, American soldier shoots a man, riots in the streets of Panama, some brief angry violence, man beaten up, and truck suddenly hits one man and kills him but only the loud smacking sound of the truck hitting the man is depicted; three depicted sex scenes of two men alone with their respective wives includes nudity, and one man’s wife catches him lying in a drunken stupor with several nude women in a Vegas strip club, plus some brief sexual insults; shots of upper female nudity in three scenes, and a shot of rear male nudity during a sex scene, plus upper male nudity in boxing scenes and other naturalistic settings; alcohol use and drunkenness; smoking; and, boxing manager puts his boxer in a bad position and then lies about it, boxer gets a swelled head and gets mad at his old friends who stuck by him but are also clearly enjoying the fruits of his labors, and rival boxers insult each other’s wives.

HANDS OF STONE tells the life story of the 1970s and 1980s boxing champion Roberto Duran – his trials, tribulations and triumphs from the time he grew up on the streets of Panama to his triumphant comeback in 1983. HANDS OF STONE has a strong Romantic worldview with lots of foul language and three explicit lewd scenes, mitigated by some positive Christian, moral and redemptive elements and references.

HANDS OF STONE begins in 1971 when Roberto’s manager at the time asks legendary trainer Ray Arcel to train Roberto. Nearly 20 years earlier, Ray had gotten in trouble with the New York mob because he wanted to take television boxing around the country, so they beat him up and stopped him from training any more boxers (NBC-TV’s Friday night fights were limited to boxing matches taking place in Madison Square Garden). Also, when Roberto first meets Ray, he disrespects him because Ray’s an American. So, Ray refuses the offer to train Roberto.

However, after checking out Roberto, Ray agrees to train him, as long as they don’t officially pay him. Ray is soon able to impress Roberto with his boxing knowledge and his experienced assessment of Roberto’s obvious boxing skills. Eventually, Ray makes a deal with the mob that allows him to earn money by betting on Roberto to win his fights, something that he does regularly.

As Roberto’s career grows under Ray’s tutelage, the movie shows flashbacks showing Roberto’s beginnings as a young boxer in the 1960s, how he met his wife, Felicidad, and Panama’s political fight against America and its ownership of the Panama Canal. Roberto has an Anti-American attitude because of this last issue, but also because his father was an American soldier who abandoned Roberto and his mother before he was born. These flashbacks catch up pretty quickly with current events.

Eventually, the movie portrays Roberto’s angry confrontations with Sugar Ray Leonard, who taunts Roberto before their famous first fight by insulting his wife, Felicidad. Roberto answers Sugar Ray’s insult tit for tat, but goes even further. Another point of conflict is Sugar Ray’s boxing style, which involves more dancing in the ring away from Roberto’s “hands of stone” than actual fighting. This irritates Roberto to no end.

Containing some good performances, HANDS OF STONE is compelling, but in fits and starts. The script could be a little tighter. Also, Roberto isn’t always a likeable guy. This really hurts the movie in the middle because Sugar Ray Leonard comes off as more likeable. The movie’s last third gets back on track, however.

HANDS OF STONE has some positive Christian, moral elements. At one point, Roberto strays from his wife and gets angry at all the hangers-on at the parties at his house, including close friends. Also, Sugar Ray’s taunts bring out the worst in Roberto. These problems come to a head, and Roberto must redeem himself. This results in an ultimately positive character arc for Roberto.

Despite these positive elements, however, HANDS OF STONE has a strong Romantic worldview. Roberto pursues his personal dreams on his own willpower, with the help of his trainer, who’s played by Robert DeNiro, even though it’s said in the movie that Roberto’s boxing talents are a gift from God that flow from God. Also, the movie’s depiction of Panama’s political struggles has an Anti-American attitude, which is reflected by some of Roberto’s own attitudes toward America. Roberto’s friendship with his trainer and eventual reconciliation with Sugar Ray take the edge off that depiction.

Finally, HANDS OF STONE contains lots of strong foul language and a couple explicit nude bedroom scenes of Roberto and Sugar Ray with their wives. There’s also a scene where Roberto’s wife catches him in a drunken stupor with some nude strippers at a Las Vegas club. This crude content makes the movie less entertaining, more annoying and more objectionable from MOVIEGUIDE®’s critical, biblical perspective. Because of this content, HANDS OF STONE is excessive.

Ultimately, the filmmakers behind HANDS OF STONE have limited the audience for their movie only to adults. This makes HANDS OF STONE less accessible to younger Latin American viewers who might enjoy and even benefit from watching a boxing movie about one of the world’s greatest Latin American boxers, and one of the world’s greatest boxers, period.