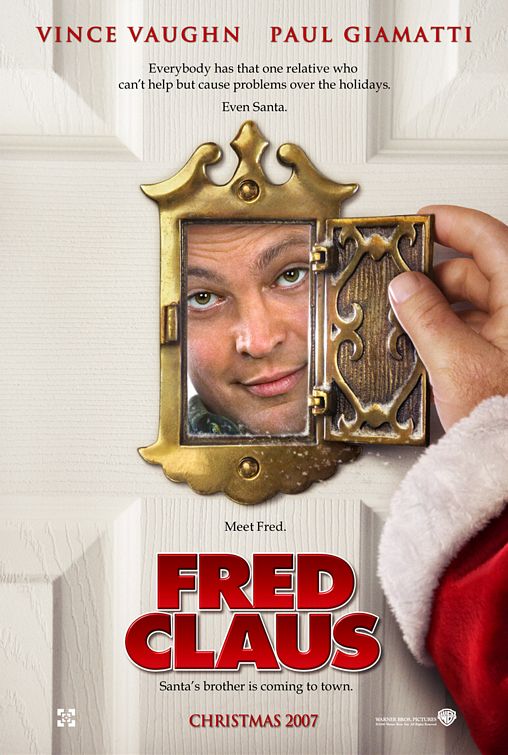 In FRED CLAUS, the older brother of Santa Claus, a.k.a. St. Nicholas, has become resentful of his brother’s giving nature and jealous of their mother’s excessive praise. Nicholas has become a saint. Because of this, he and his whole family now live forever. Estranged from his brother, Fred Claus is a fast-talking hustler in Chicago who needs $50,000 to open a casino. Egged on by his wife, Nicholas tells Fred he will give him the money only if Fred comes to the North Pole to help him prepare for Christmas Eve. A mean efficiency expert wants to fire Santa Claus, however, because Santa and his elves can no longer keep up with children’s demands for toys.

The second act of FRED CLAUS could use some re-writing, including better jokes and more family-friendly content. That said, the third act picks up. In fact, the story’s climax shows the joys of Christmas, including the birth of Jesus. It also commends repentance, forgiveness, redemption, and generosity to children. Thus, a strong Christian premise eventually appears. Still, MOVIEGUIDE® advises caution for older children regarding some of the movie’s earlier tone, including brief foul language.

(CC, BB, Pa, FR, L, VV, N, A, M) Strong Christian worldview with strong Christian premise including major references in one important scene to the song “Silent Night,” the holiness of Baby Jesus, a reference to the Virgin Mary and, hence, the Virgin Birth of Christ, and the healing power of forgiveness solves all the plot conflicts, plus two Christmas carols during end credits present very strong Christian doctrine and references to God in Salvation Army signs, but there are some confusing pagan, borderline elements in much of movie, including a joke about statues of Santa Claus versus statues of “the Buddha,” couple talks about moving in together, romantic relationships occur but there is no mention of marriage or getting engaged, protagonist is often very selfish and irresponsible, conflicts occur between brothers, and mother treats two brothers unequally, which causes resentment and conflict; four obscenities and three uses of “heck”; some strong comic violence such as man hits men dressed as Santa with plastic store signs, man hit with plastic bat, Santa Claus fights with his brother, snowball fight, angry elf wrestles with man and man shuts elf into supply cabinet, elf crashes into small table and breaks it, and man falls down chimneys; no sex scenes but couple briefly discusses moving in together and romantic relationships occur but there is no talk of marriage or getting engaged; light nudity of just-born baby; light alcohol use and “Frosty’s Tavern” at the North Pole serves eggnog drink, but no mention is made if eggnog contains alcohol; and, lying, gambling reference, man cons his more successful younger to lend him money, man poses as a Christmas charity on the streets and gets into trouble, sibling rivalry, movie says children should not be labeled “naughty” but that every child deserves a gift at Christmas, and mother favors one brother over another, which causes resentment to be built within a family.

FRED CLAUS could have been a much better Christmas movie than it is. It starts off funny, but hits some snags in the middle until it picks up and delivers one of the better, most Christian endings for a Christmas movie about Santa Claus.

The movie opens with St. Nicholas being born long ago in Europe while his older brother, Frederick, watches. Frederick loves his brother, but becomes resentful when Nicholas does many good deeds and gets praised excessively by their mother. The resentment breaks out into conflict when Nicholas cuts down Frederick’s favorite tree. Nicholas tells Frederick that he noticed how much Frederick loved the tree so he decided to cut it down and bring it into the house for him. What Nicholas doesn’t know, however, is that the reason Frederick loved the tree is because he had made friends with the little blue bird living there. Frederick never saw the little bird again.

Nicholas becomes a saint because of all his good deeds. A narrator says that when someone becomes a saint, they live forever, as do their parents, siblings and spouses.

Cut to present day Chicago. Estranged from his brother, who is now Santa Claus, Fred has become a fast-talking hustler who wants to start a gambling casino. He needs $50,000 by Dec. 22, however, so he poses as a street charity during the Christmas season. He is discovered and arrested, which causes him to miss his dinner date with his girlfriend, Wanda, on her birthday.

Fred calls Nicholas to borrow bail money and convinces Nicholas to also loan him the $50,000. Egged on by his wife to practice tough love, Nicholas tells Fred that he must come up to help out at the North Pole to get the bail money and the 50 grand. Fred promises Nicholas that he can parlay the 50 grand into $60,000 to give back to Nicholas, who’s skeptical but encouraging. After all, he’s a saint.

What Fred doesn’t know is that there’s an efficiency expert, Mr. Northcutt, visiting the North Pole. Mr. Northcutt threatens to shut down the whole Santa Claus enterprise if St. Nicholas and the elves cannot make their quota of creating enough toys to fulfill the growing wish lists of the good children of the world writing to Santa. Apparently, more children are asking for more than just one or two presents, and this is putting great strain on the whole toy-making operation.

When Mr. Northcutt sees that Fred doesn’t get along with his family, he hatches a devilish plot to make sure that he can fire Santa Claus and all the elves. Of course, Fred and St. Nicholas play into his hands.

The second act of FRED CLAUS could use some re-writing, including funnier humor. The movie gets a little too serious and uncomfortable for a family Christmas movie.

That said, the third act picks up. In fact, the story’s climax finally celebrates the true Christian meaning of Christmas, including the story of St. Nicholas, which is repentance, forgiveness, redemption, and generosity, through the birth of Jesus Christ. The climax includes one of the most stirring and positive uses of the great Christian Christmas carol “Silent Night” that’s ever been done in movies or television.

The rest of the movie, however, is slightly too edgy. Also, though there is a reference to God in a few shots of some Salvation Army signs, the first two-thirds of the movie contains no other references to the Christian or religious underpinnings of Christmas or St. Nicholas’s sainthood. Thus, MOVIEGUIDE® advises caution for older children at the pre-teen level.