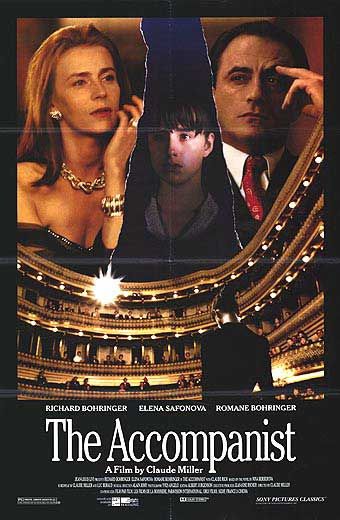 Set in the 1942 German occupation of France, THE ACCOMPANIST tells the story of two women: the one, a pianist, Sophie, who finds herself unable to commit herself to or love others; the other, a singer, Irene, is confident, affable and self-centered. The film is both a traditional and a modern film and contains some moral lessons concerning adultery.

Set during the 1942 German occupation of France, a time of great social upheaval, THE ACCOMPANIST tells the story of two women: Sophie, a pianist, who finds herself unable to love others; and, Irene, a singer, who is confident, affable and self-centered. Possessing a deep, intuitive feel for music and an ability to interpret and play the subtle colorings of meaning in the notes, she is hired by Irene–a captivating opera diva. Sophie both loves and hates the wealthy and prepossessing Irene. With Irene and her husband, Charles, Sophie escapes to London. In London, Irene engages in an adulterous affair, and as a result, Charles commits suicide. In Sophie’s character, the movie reveals the pain, sorrow and loneliness of a person who can only watch life pass by and not participate in the joy of friendship. Emotionally severed from her mother, devoid of a father who left his family for another woman, Sophie does not know how to give or to receive love.

In the end, Sophie is left alone at the train station amidst the joyous reunion of lovers and loved ones as the troops return home from the war. The sub-plot of Irene’s adulterous affair which leads to the death of her husband (brilliantly played by Richard Bohringer) reveals the consequences of broken love and focuses our attention those who cannot find The Light to lead them out of their incapacitating self-darkness.

Writer: Claude Miller, Luc Beraud BASED ON THE NOVEL BY: Nina Berberova