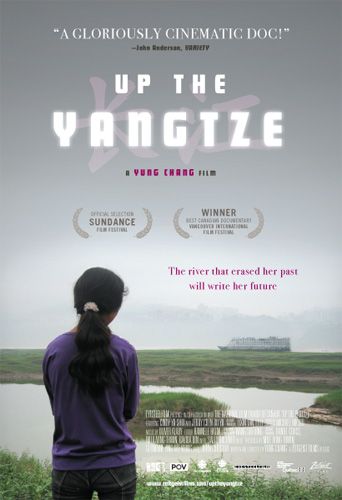 UP THE YANGTZE, a Chinese documentary, chronicles the struggles of one family who are too poor to relocate from the city Fung Du, which is slowly being flooded by the great river. The flooding is part of a plan to advance China’s economic structure through the creation of the largest hydroelectric dam ever built. The movie shows who has borne the cost of bringing China into the 21st Century. For example, the price of modernization is high for Jerry Bo Yu Chin, who must send his daughter off to work and who cannot afford to send his son to middle school. Meanwhile, an older Catholic woman prays that the young people will stop being self-centered and learn to respect their struggling parents.

This beautifully constructed documentary gives a thought-provoking look at modern day China. Through the story of two socially diverse individuals, it documents the personal strength that comes with adversity, and the shame which comes with slothfulness. It gives a strong message about the work ethic, especially for teens, and about the strain on the human heart that comes with change. The movie is neutral on capitalism versus communism.

UP THE YANGTZE focuses on The Three Gorges Dam, which symbolizes China’s great economic advancement. It is considered to be the largest hydroelectric dam ever built, yet comes with a cost. This movie is a beautifully filmed first-hand look at just what and who has had to pay the biggest price for China’s move into the 21st Century.

The narrator shares about his visit to China with his grandfather, who finds a brand new country rather than the one that he remembered as a child. What was once a bustling city is now deserted. Two million people are being relocated from the now “ghost city” of Fung Du to higher ground because the land is about to be purposely flooded. Giant water level markers document the progress of the controlled flooding. Old black and white footage shows the late Chairman Mao, who was the inspiration for the dam, swimming in the Yangtze. One relocated resident points out, “The Three Gorges Dam is a national project, not private. The higher level of government distributes the money. But when the money trickles down through the hand of the people, like corrupt officials, it just disappears.”

The filmmaker shows an old battered house near the river’s edge. Within the house an older Catholic woman, who refuses to leave her home, is praying for all of the families and rebellious teenagers. Her prayers are unselfish and filled with an abiding faith. Her house has been her sanctuary to the Lord, and she will stay there. She prays that the young people will stop being self-centered and learn to return respect to their parents who are struggling.

The storyline of the documentary follows the lives of Jerry Bo Yu Chen and his family as they prepare to evacuate their little shack on the banks of the mighty Yangtze River. Jerry and his wife are peasants in every sense of the word. Neither is educated, and therefore, they are limited in what they can do for a living. Their teenage daughter, Cindy Shui Yu, is forced to work on one of the cruise ships, the Victoria Queen, in order to help support the family. Little brother is left at home to only dream of one day being able to go to school.

Jerry explains that most of the residents were moved from the city to the other side of the river and placed into government housing. He, however, chose to stay in a little homemade shack on the water’s edge, knowing full well that he would have to vacate when the water rose. The family debates over sending Cindy Shui to work. She behaves like a typical teenager, balking at the responsibility, but she does go to work.

The Victoria Queen runs a very tight ship, especially with its young employees who must pass a three-month probation period before being hired on a permanent basis. Cindy is shy and homesick, but soon makes friends with some of the other girls, including those who would be considered to be of a higher social class. The movie chronicles the daily routines of Cindy, as well as the progress of a rather arrogant and self-centered young man who thinks he is destined for greatness.

The water rises and Jerry Bo Yu Chen struggles to move his few belongings up a steep embankment to the road. He and his family finally move to the city. Cindy stays with the cruise ship, having made it through her period of probation.

The film opens with a quote from Confucius:

“By three methods we may learn wisdom:

First, by reflection, which is noblest;

Second, by imitation, which is easiest;

And third, by experience, which is the bitterest.”

It is the suffering Chinese peasants who have shown the most character. Yet, despite their sufferings, they keep pressing on with honor. This is a lesson that we would all do well to learn.

Rent or Buy UP THE YANGTZE: