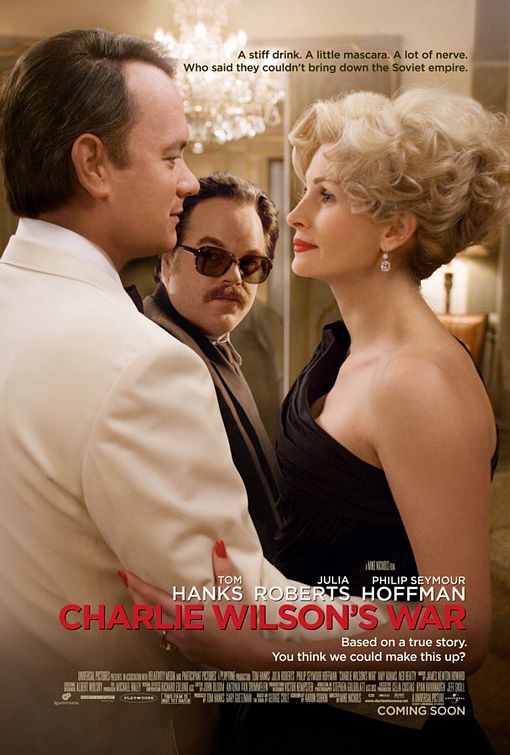 CHARLIE WILSON’S WAR is awful, pathetic, smarmy, smug, immoral, and revisionist. The movie opens with the CIA honoring U.S. Congressman Charlie Wilson for single-handedly stopping the Soviet Union in Afghanistan by arming the Muslim resistance there. The story cuts quickly to Charlie Wilson, played stiffly by Tom Hanks, in a Las Vegas hot tub with naked strippers and while naked women serve drugs and drinks. Wilson drinks heavily, people snort cocaine, and a pimp asks Charlie for a favor. From there, the movie claims that Wilson, with help from Christian Texas socialite Joanne Herring, helped get American funding for the anti-Soviet rebels in Afghanistan, who became the Taliban.

CHARLIE WILSON’S WAR is not only filled with drugs, sex, dishonesty, and corruption, but it also is clearly an attempt to say that this smarmy left-wing Congressman won the war in Afghanistan, not President Ronald Reagan. CHARLIE WILSON’S WAR doesn’t understand people, revises history and spends so much time misrepresenting policy that it has no time for drama. The nudity, sex and drinking are all excessive, but what is worse is the smug elitism of the movie’s humanist, anti-Christian perspective.

(HHH, AbAbAb, PCPC, RHRH, ACAC, B, LLL, VV, SS, NN, AA, DD, MM) Very strong humanist worldview with very strong anti-Christian, sometimes politically correct content mocking everybody, plus strong revisionist history and, except for some foul-mouthed, low-life CIA official, Christians look like frauds and womanizers, Christians are mocked for wanting Nativity scene, wealthy Christian told to tone down her Christian language, Muslims are portrayed without character, Christian Congressman yells “Allah Ackbar” with right-wing enthusiasm, plus strong revisionist history, but movie does strongly depict the collapse of the Communist Soviet Union as a good; 73 obscenities and 14 profanities; CIA officer shatters window to superior’s office, lots of war footage and lots of scenes of refugees missing arms, legs and body parts, especially children; lots of sexual scenes with strippers, Playboy bunnies and lots of discussion of sex, sex with wealthy misrepresented Christian woman, daughter sleeps with Congressman, man calls his female staff “jail bait” because they are all young buxom, female interns; lots of upper female nudity with strippers, belly dancers and wealthy Christian holds a slave auction to finance arms to Afghanistan, something that never happened during the Afghan war against the Russians in the 1980s, but is mostly used to make Christians and conservatives look bad; constant drinking to get drunk; constant smoking, cocaine use depicted, and lots of other references to drugs; and, Muslims, Jews and Christians equated with being the same, plus lying, deceit, fraud, government corruption.

CHARLIE WILSON’S WAR is awful, pathetic, smarmy, and smug. As the movie opens, United States Congressman Charlie Wilson is honored by the CIA for single-handedly stopping the Soviet Union in Afghanistan by arming the Muslim resistance there. The story cuts quickly to Charlie Wilson, played stiffly by Tom Hanks, in a hot tub in Las Vegas with three naked women and naked strippers cavorting and serving drinks and cocaine, Wilson drinking heavily, people snorting cocaine, and a pimp asking Charlie for a favor. Bored with the excess, Charlie catches Dan Rather reporting on the Afghan invasion by the Soviets.

When Charlie returns to Washington, he’s surrounded by buxom aides whom he calls “jail bait” because they are so young. He asks the CIA to report to him on Afghanistan. As some foul-mouthed CIA officer reports to Charlie, his chief aide is under indictment for drug use.

A wealthy Houston, Texas socialite, Joanne Herring, gets Charlie to come down to Houston so she can tell him to stop the Communists in Afghanistan by providing weapons to the tribes there. Joanne is a conservative, Christian anti-Communist who is holding an auction of attractive young Texas women to finance this plan and who sleeps with Charlie. In real life, the Joanne Herring my wife knew and I met was not like this. In fact, she would have been in her senior years (perhaps in her sixties) at the time the movie takes place, so it is hard to imagine her cavorting like this, especially with her strong Christian commitment.

Charlie tells Joanne he’s a liberal and elected by the Jews. She asks how many Jews are in his Texas district. He says none, that he gets support from Jews in New York and Los Angeles. She flies Charlie to Afghanistan, where the plight of the refugees touches Charlie’s bleeding heart. Charlie returns to Washington and uses his position on the defense committee to raise the funding for arming the Afghans from $5 million to $1 billion.

CHARLIE WILSON’S WAR is not only filled with drugs, sex, dishonesty, and corruption, but it also is clearly an attempt to say that this smarmy left-wing Congressman won the war in Afghanistan, not President Ronald Reagan. For those who don’t remember, Reagan had already worked out years before his presidency a plan to finance anti-Communist rebels all over the world. Not only does Charlie Wilson’s war falsely portray history, it also bashes Christians and defames the reputation of Joanne Herring, turning her into a born again Christian society madam. The nudity, sex and drinking are all excessive, but what is worse is the smug elitism of the movie’s humanist perspective.

CHARLIE WILSON’S WAR doesn’t understand people, revises history and spends so much time misrepresenting policy that it has no time for drama, jeopardy or storytelling. Everyone involved in this movie should be ashamed. The one positive virtue is that it depicts the collapse of the Soviet Union as a good thing.