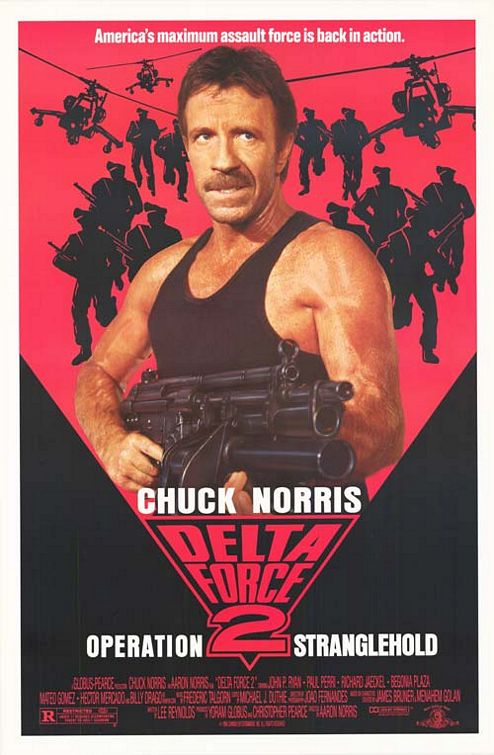 Chuck Norris fans have all the action they could ask for when, as Colonel Scott McCoy, he and a dozen hand-picked marines fly into a South American drug country to destroy the cocaine production, rescue some DEA hostages and rub out the land’s untouchable drug czar, Ramon Coda, in a blaze of exploding missiles and flying fists.

In an exuberant parachute scene, McCoy and his partner Paul arrest Coda on an airplane and jump to a waiting Navy cruiser. Unfortunately, Coda gets out on $10 million bail and immediately takes revenge on Paul by murdering his family. Taking off after Coda, Paul meets his end in Coda’s gas chamber, while his fellow DEA agents are held hostage.

The American president okays an operation into Coda’s homeland, San Carlos (a thinly veiled Columbia), to free the hostages. To penetrate Coda’s island fortress, McCoy climbs up a sheer mountain cliff. He is soon joined by an elite handful of specially-trained Marines flown in under a lively General Taylor gleeful at the prospect of blasting coke fields out of existence.

The photography, music and action scenes are good and create the sensation that you are there with McCoy, which may be not so good, considering that the payoff is a long sequence of destruction. Neck breaking seems to be a favorite among the many acts of violence. However, so inhumanly ruthless are the atrocities committed by the hypnotically-evil Coda and his henchmen, that when it’s time for McCoy to give “Lesson #1…,” you’re actually routing for him.

After knocking off scores of armed thugs, McCoy gets his hands on the boss and escapes with him in a bullet-proof limo, while the Marines lay waste to the drug czar’s heavily guarded headquarters, mostly with missiles shot from a helicopter. San Carlos’ duplicitous general joins the chase, but he, too, is blown out of the sky.

Coda escapes into the jungle, but is recaptured by McCoy, who radios Gen. Taylor to airlift them out in an exciting finish. Since McCoy is the kind of guy who puts bringing drug dealers to justice ahead of personal revenge, the story resolves what to do with Coda by having him killed by accident.

The underlying premise (and fantasy) that gives DELTA FORCE 2 its charge is that an American special forces commando unit, given their heads, weaponry and special abilities, can lick the Medellin cartel in about two days. All the exploding missiles and flying fists make for great entertainment, but not for appropriate hero role-modeling.

Too often movies assume that a hero is someone eager to express himself through gunplay and that an audience will be happy to watch violence on an ever-more-extravagant scale. In reality, though, heroes aren’t necessarily the ones who outgun or outfight everyone and everything in sight. They’re the ones who fight only when necessary, who struggle for something beyond mere self-interest, and who dare to be scared.

This is not the case in DELTA FORCE 2. Also going against the film, is its profane and obscene language, and many acts of violence, which include shots of graphic carnage, knife guttings, death by gassing, rape, and an impaling.