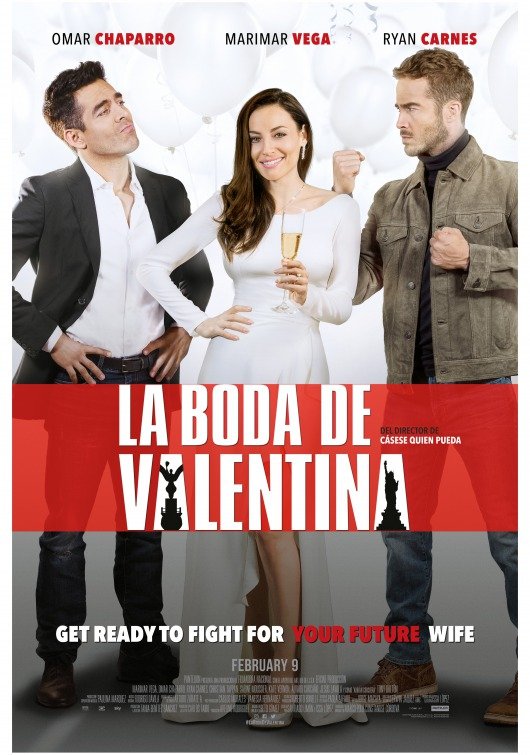 LA BODA DE VALENTINA is an R-rated Mexican romantic comedy. Valentina must return to her family in Mexico City to get a divorce from her ex-boyfriend, whom she never married in the first place. Her father is running a campaign for city mayor, so he married the two of them without her knowledge to help out his political standing. However, Valentina is now engaged to a man in New York City. So, she goes back home to Mexico and must decide which life is more true to her heart.

Like many romantic comedies, LA BODA DE VALENTINA is sometimes a bit cheesy, but it’s filled with many laughs and a lot of family love. Although a lot of it is Spanish humor, the viewer doesn’t have to speak that language to enjoy this movie. Despite its moral, redemptive moments, the movie has a strong Romantic worldview where the main character lives according to the desires of her heart. LA BODA DE VALENTINA also has an excessive amount of foul language, plus some sexual innuendo and scenes of alcohol abuse. MOVIEGUIDE® advises extreme caution.

(RoRo, B, C, Ho, LLL, V, S, N, AAA, DD, MM):
Dominant Worldview and Other Worldview Content/Elements:
Strong Romantic worldview as the main character Valentina follows her heart above all else including any previous commitment, and happiness is the main pursuit, there is no mention of God or any higher power or being, men are considered overall good, and morality is relative, mitigated by some morally positive pro-family elements and a redemptive moment when one character sacrifices their own happiness for someone else’s happiness, plus there’s a suggestive comment about same-sex marriage;
Foul Language:
At least 45 obscenities (including several “f” words) and 10 profanities, plus insults like “moron,” “jerk,” “douchebag,” etc., more than 20 racial slurs, some toilet humor, and three obscene gestures;
Violence:
Light violence when two characters get into a fist fight with each other over the female protagonist, characters go to a wrestling match, and one character gets into an altercation with police;
Sex:
Light amount of sexual content, including a few innuendos, but nothing shown on screen;
Nudity:
Light amount of nudity including upper male nudity and men shown in Mexican wrestling garb which mainly consists of a speedo and cape;
Alcohol Use:
a high amount of alcohol use, characters drink pretty often casually, take tequila shots multiple times, women have cocktails, and on multiple occasions a few different characters get completely drunk;
Smoking and/or Drug Use and Abuse:
A few characters sometimes smoke cigarettes or cigars occasionally, and one character insinuates another character does cocaine; and,
Miscellaneous Immorality:
Moderate amount of miscellaneous content such as racism, one character lies and deceives her fiancé because she’s embarrassed about her family, high amount of family dysfunction portrayed, stepmother and daughter argue quite a bit as well as a mother and son, and father marries his daughter to her ex-boyfriend without her knowledge or permission for political reasons, and she has to get a legal divorce.

LA BODA DE VALENTINA is an R-rated Mexican romantic comedy about a young woman engaged to her current boyfriend in New York, who learns her father, who’s running for mayor, forged a marriage certificate to her ex-boyfriend in Mexico to get out of a jam. LA BODA DE VALENTINA is full of laughter and contains some pro-family elements, but it has lots of foul language, some alcohol abuse, innuendoes, and a strong Romantic worldview where the title character lives according to the desires of her heart.

As the movie opens, Valentina’s happy life with her boyfriend, Jason, in New York City gets even happier when he asks for her hand in marriage. She insists on them getting married in the United States and not involving her family in the affair at all. Meanwhile, in Mexico City, Valentina’s father is the middle of a campaign for city mayor. After a few wild family scandals, Valentina’s father needs to suddenly put his assets into the name of someone not in the immediate family. The solution he comes up with is to forge a marriage certificate between Valentina and a friend of the family, Angel, who just so happens to be Valentina’s ex-boyfriend.

Back in New York, Valentina is applying for her green card and is surprisingly denied. She learns she’s married by law in Mexico to Angel and so now cannot have another wedding until it’s sorted out. She tells her fiancé her father is sick and returns home to Mexico City to divorce Angel and finally marry Jason.

Once she arrives back home, Valentina is convinced by her father to stay legally married to Angel only for a month in order to help out with his campaign. The longer she stays in Mexico, however, the longer she begins to remember what her life was like with her family, and when she was with Angel. Just as she’s beginning to warm back up to her ex-boyfriend, Jason surprises her with a visit to Mexico City, along with his mother, in order to plan the wedding.

Valentina is now torn between the life she chose with Jason in New York and the life she used to know in Mexico City. Now, she has to search her heart and discover which place fits her best and will make her more happy.

LA BODA DE VALENTINA is full of heart and laughter. Although some of the lines are a bit cheesy, this Mexican comedy translates to any language and is sure to bring out laughs. It’s done in the stereotypical romantic comedy style, but is done well and even has a few unexpected twists. It also contains some great family values and teaches that, though some family members can be really embarrassing, the bonds with them can bring joy and warmth. There are also moments where a character sacrifices their own happiness for someone else’s happiness.

However, LA BODA DE VALENTINA has a strong, overarching Romantic worldview, where the main characters follow their hearts and pursue personal happiness without God. Thus, the movie’s questionable content is rather high with an excessive amount of foul language, some alcohol abuse, and some sexual innuendo. So, MOVIEGUIDE® advises extreme caution, including for adults.