LADY IN THE WATER 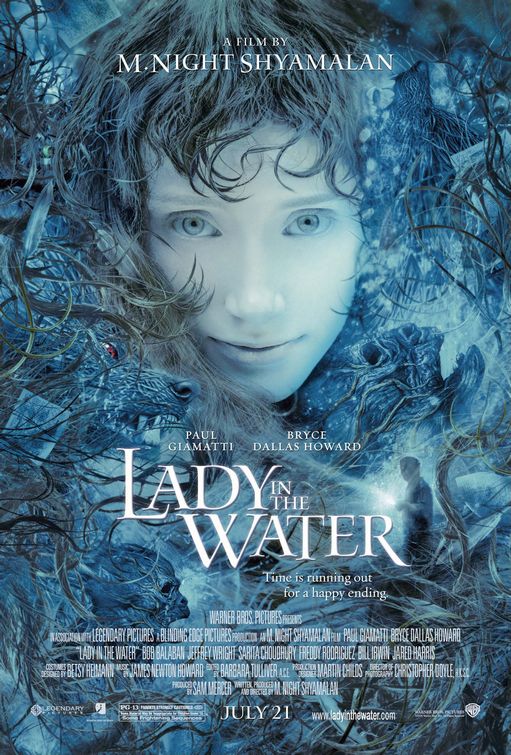 LADY IN THE WATER stars Paul Giamatti as a troubled man named Cleveland who, after the murder of his wife and child, has withdrawn to become a stuttering maintenance man at an apartment complex. Cleveland encounters a water nymph named Story, who has come to the human world to inspire a writer whose work is supposed to move the world in a peaceful direction. She is being stalked by a monster, however. That sets the stage for Cleveland to employ the help of other people to find the writer and protect Story until she can be returned magically to her own world.

At times, LADY IN THE WATER is a funny, warm, redemptive fairy tale. Then, however, it becomes a self-indulgent, messy tale about vague promises of a New Age utopia. The movie also shows aspects of being a flawed, self-indulgent, Romantic, and liberal fantasy where all human beings in Cleveland's apartment complex are basically good, but they are surrounded by evil. All of these good and bad messages compete with one another, leaving the movie without a single clear premise or a clearly defined morality and philosophy reflecting true biblical values.

(PaPaPa, RoRo, BB, C, L, VV, S, A, D, M) New Age, mixed pagan worldview with strong Romantic, liberal notions of changing the world in a more peaceful direction, some strong moral elements and references about helping the weak and other issues, and some light redemptive content, including some talk about hearing the "Voice of God" (but which God?) and having a purpose in life; two or three light obscenities and five light exclamatory profanities of "My God"; some strong scary violence and scary threats of violence, such as wolf monster stalks and attacks people, wolf monster apparently kills one person, mysterious creature scares man at first, man nearly drowns, injured girl has scratches on her leg, and man explores cave underneath pool; very light sexual references when man doesn't know what to do about mysterious girl wearing only his shirt in his apartment after apparently saving him from drowning; no explicit nudity but female midriff shown, people in bathing suits by pool and girl only wears man's shirt and sits curled up in shower; alcohol use; smoking and man passes some kind of cigarette to another man as men sit around and smoke, but the cigarette's content is never really implied or shown; and, water nymph takes objects left by apartment pool, Asian stereotypes and people perform magical healing.

Most of the critics came out of the press screening for M. Night Shyamalan’s new movie, LADY IN THE WATER, grumbling. Earlier, during the actual screening, a couple critics even shouted angrily at the screen and one critic was heard hissing when the end credits appeared. No wonder: the most venal, stupid character in the story is a pretentious film critic. To top it off, Shyamalan has the chutzpa to cast himself as a struggling writer who has a misunderstood manuscript that eventually will inspire and change the world. Apparently, not only is Mr. Shyamalan angry at his former studio (if you believe recent reports in the press about a new book about him), he is also angry at the lukewarm reception a couple of his recent movies, UNBREAKABLE and THE VILLAGE, have gotten from many critics. Talk about being a self-indulgent artist!

LADY IN THE WATER starts off interesting enough. It stars Paul Giamatti as a man named Cleveland who, after the murder of his wife and child, has withdrawn from the world to become a maintenance man at a large apartment complex. Cleveland thinks someone has been swimming in the pool after hours and taking items that people have left by the pool. One night he tries to catch the culprit but starts to drown and loses consciousness.

The next thing he knows, he awakes dripping wet on his couch. In the chair is a nude young woman wearing one of his shirts. The mysterious woman says her name is Story and that she is a narf, but won’t say anything more. Story is clearly frightened, however, about something.

Cleveland starts asking the apartment dwellers if they know what a narf is. A female Asian college student tells him that a narf is a water nymph and begins telling him a crazy bedtime story her mother used to tell her about such creatures. She can’t remember much of the story, however, and her mother, who doesn’t speak English, is a xenophobic traditionalist who’s wary of non-Asians. Slowly, with help from other apartment dwellers, Cleveland coaxes the rest of the story out of the mother and out of the frail young water nymph Story.

Story has come to the human world to inspire a writer who is supposed to move the world in a new, peaceful direction through his art. This is where Shyamalan’s writer character, an American descended from people in India, enters the picture.

At times, especially in the first half, LADY IN THE WATER is a funny, warm and redemptive fairy tale. Then, however, it becomes a self-indulgent, messy fairy tale about vague promises of a New Age utopia. The movie also shows aspects of being a flawed, self-indulgent Romantic fantasy where all human beings in Cleveland’s apartment complex are basically good, but they are surrounded by evil. Thus, all they need to do is to open their hearts to love and let go of hate.

All of these messages compete with one another in the movie’s second half. This leaves the plot without a single clear premise, a clear theology or philosophy, or a clearly defined morality and philosophy reflecting true biblical values. Part of the problem is that the mythology surrounding the water nymph is much too elaborate and often corny.

During the movie, Shyamalan shows TV images of war in the Middle East. Without mentioning the Middle East or the United States involvement in Iraq, these images depict a world on the brink of self-destruction. Thus, the water nymph has come into the world to inspire mankind to stop fighting and make peace. This is, of course, mushy-headed liberal thinking that bears little resemblance to reality.

As usual, Paul Giamatti is fun to watch as the stuttering, good-hearted, nervous Cleveland. Bryce Dallas Howard, who plays the water nymph, doesn’t have much to do, however, besides look mysterious and fragile. The other characters seem to be shallow stereotypes and archetypes.

Ultimately, LADY IN THE WATER deserves – at best – two stars and rates a Minus Three in Acceptability, because of its New Age, Romantic, empty-headed, liberal thinking. Although God is mentioned several times, the movie doesn’t point to which God. It also doesn’t point to Jesus Christ, who is the real savior of the world, not Buddha, not Shiva, certainly not Mohammed – and not some unknown writer from Philadelphia.

M. Night Shyamalan clearly has a big heart, and a heart for big ideas. These things are good things for an artist to have, but they need direction, especially in a multimillion dollar, big budget summer movie. They also need to be tempered by a traditional, Christian worldview that focuses first on the Kingdom, or Spiritual Reign, of God and His righteousness with, preferably, overt, positive references to Jesus Christ and the Bible. Adding the former will make Shyamalan’s movies more entertaining and cohesive. Adding the latter will help them become truly inspiring, sublime works of art reflecting the glory of God and His amazing grace.