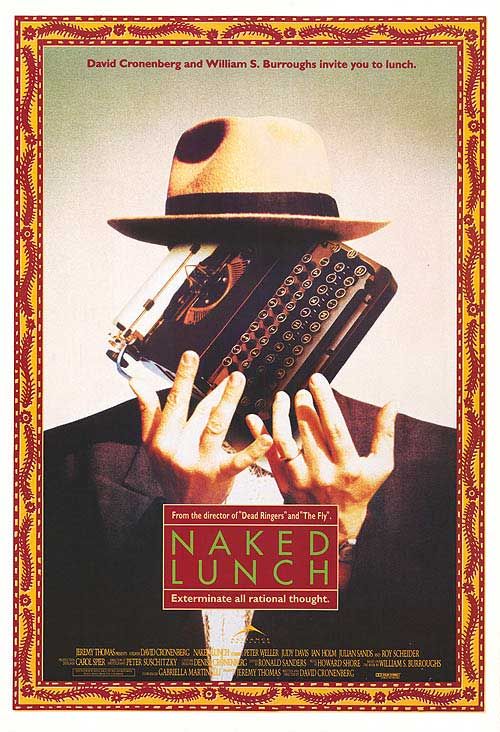 Loosely based on William Burroughs's life and his impressionistic novel of addiction and homosexuality, NAKED LUNCH is the tale of Bill Lee, an exterminator who hallucinates a huge cockroach who speaks through an anus on its back the homosexual ideas which Bill won't consciously admit. Just as Burroughs did in life, Bill shoots his wife and flees to Interzone, a decadent land based on Tangiers. Disregarding the fact that Burroughs battled his drug habit and agonized over his sexual identity, director Cronenberg creates a drug induced romp into hell where the demons are witty yet disgusting bugs that bring the hero's unconscious desires to life.

NAKED LUNCH is loosely based on William Burroughs’s life and his 1959 impressionistic novel of addiction and homosexuality. In the film, Bill Lee is an exterminator, who is addicted to his insecticide and hallucinates a huge cockroach who speaks through an anus on its back. The bug expresses suppressed homosexual ideas which Bill would never consciously admit. Just as Burroughs did in life, Bill shoots his wife in a game of William Tell. A Mugwump (a creature that secretes addictive fluid from phalluses on his head) orders Bill to escape to Interzone, a decadent land based on Tangiers, to file his “reports” which become the novel NAKED LUNCH.

NAKED LUNCH implies that murdering his wife, homosexuality and drugs turns Bill into a writer. Actually, Burroughs spent most of his time in Tangiers battling his drug habit and agonizing over his homosexuality, which he called “a horrible sickness.” However, director Cronenberg never portrays Burroughs’s agony, but instead creates a perversely captivating drug induced romp into the bowels of hell where good is bad and bad is good. The demons are there, but now they are witty though disgusting bugs that bring the hero’s unconscious desires to life.

Producer: David Cronenberg ON THE NOVEL BY AND LIFE OF: William Burroughs