"Mining for a Class Action Lawsuit" 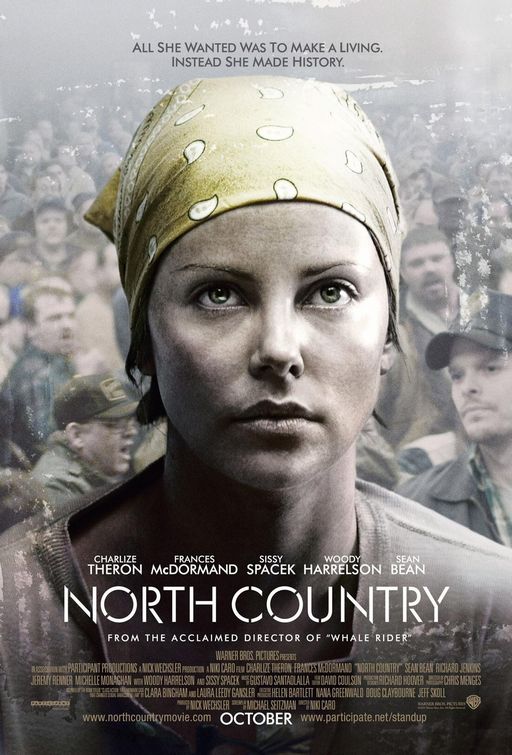 NORTH COUNTRY is being touted for Oscar consideration, but it plays like a TV movie of the week, except for the R-rated content in the script. Inspired by a true story, it stars Charlize Theron as Josey Aimes, a single mother of two separated from her wife-beating husband, the father of Child Number Two. Josey returns home to her parents in the Minnesota mining country. Encouraged by her old friend, Glory, one of the few female miners in town, Josey gets a job at the local mine, but sexual harassment and physical abuse from the male miners threatens her job, the only way she can provide a decent living for her family.

Despite a pro-life message in one scene, NORTH COUNTRY sports a liberal, humanist, feminist view of sexual harassment. The movie also contains strong sexual content and many gratuitous vulgarities that are often incidental to the telling of the story. Furthermore, instead of turning to God and His biblical principles, or to the Church, to fight the evil men harassing her, the heroine turns to a secular, runaway legal system. All things considered, the content in NORTH COUNTRY is excessive and problematic.

(H, PCPC, FeFe, Ab, B, C, Ho, LLL, VV, SS, NN, AA, D, MM) Dominant liberal humanist worldview with strong politically correct, left-leaning, feminist content making wild comparisons between the really bad things happening to the women in the movie and the mild (relatively speaking) allegations of Anita Hill against conservative Supreme Court Justice Clarence Thomas (but no references to similar, and even worse, accusations against liberal President Bill Clinton), and heroine makes bizarre, possibly anti-Christian comment about grandmother preparing heroine's young daughter for Catholic Communion, as well as some moral elements, including pro-life message in one scene and father finally sticks up for daughter who’s being harassed, and very brief Christian references mitigated by heroine's humanist, nominally pagan life, including little girl unintentionally makes a joke about wanting to be a lesbian at the dinner table; 51 obscenities, 10 strong profanities, two light profanities, two or three obscene gestures, vulgar words written in human feces on women’s restroom, men tip over port-a-potty with woman in it, woman finds male sperm in her locker, and women called names like slut and whore; some disturbing violence such as depicted rape, and man holds woman down on ground as he threatens her, plus woman has cut lip and black eye from being beaten by husband off screen and hockey violence with players shoved up against the boards; depicted rape, sexual harassment (some of it crude and vulgar) and two or three lesbian jokes; no nudity but woman finds rubber penis in her lunch pail and another woman waves it around in lunchroom to make a joke against the man or men who put it there; alcohol use and drunkenness in one scene; smoking; and, sexual harassment rebuked, lying, woman decides to remain a single working mother after she runs away from husband who’s been beating her, father shuns daughter after she gets pregnant in high school and after she starts working in strip mine where he works, and false rumor spread in public.

NORTH COUNTRY is being touted for Oscar consideration, but it plays like a disappointing TV movie of the week, except for the R-rated content in the script.

Inspired by a true story, the movie stars Charlize Theron as Josey Aimes, a single mother of two separated from her wife-beating husband, the father of Child Number Two. Josey returns home to her parents in Northern Minnesota mining country, but she and her father don’t get along because her first child was born out of wedlock during high school. Her father’s hurt and disappointment are still palpable, even when the two are not talking to one another.

Encouraged by her old friend, Glory, one of the few female miners in town, Josey gets a well-paying job at the local mine where her father also works. This puts even more emotional distance between Josey and her father.

Josey doesn’t mind the hard work at the mine, but the nasty harassment from the male miners proves to be too much. When Josey tries to speak out against them, the harassment increases, especially from Bobby Sharpe, a former high school boyfriend who shares a secret about the true father of Josey’s first child, her son Sammy.

Things at work go from bad to worse. Josey finally enlists a handsome former attorney in town to sue the company and the union. The attorney sees the opportunity of producing a landmark class action lawsuit on sexual harassment in the workplace. They need two other female miners, however, to join the class action lawsuit, or the judge will throw out the case. This proves to be very difficult, because the other female miners are afraid of losing their own jobs.

NORTH COUNTRY sports a liberal, humanist and feminist view of the subject of sexual harassment. It even makes a point several times of giving support to Anita Hill’s unproven charges of sexual harassment against Supreme Court Justice Clarence Thomas.

Ironically, however, the movie also contains a scene that delivers a subtle, but powerful, message against abortion. In the scene, Theron’s character Josey tells her son Sammy that, although he was the product of a vicious rape, she decided to keep him and love him because the baby in her womb was not responsible for the rape.

This pro-life message is slightly muted by an indication that the issue of keeping the baby or not was a choice that Theron’s character made for herself, but the message should encourage women who see it not to abort their babies, even if they have been raped.

MOVIEGUIDE® wonders, however, if this pro-life message will get lost in the movie’s obvious pandering to the radical feminists supporting Anita Hill’s bizarre, unconfirmed charges against Thomas.

Hypocritically, most of those same feminists and liberals who were so vocal when it came to supporting Anita Hill’s testimony about sexual harassment against a Supreme Copurt nominee appointed by a Republican president suddenly went AWOL when women made charges of sexual harassment and even rape against President Bill Clinton, a liberal Democrat. What was good for the goose wasn’t good for the gander.

Despite the pro-life message in one scene, NORTH COUNTRY’s support of Anita Hill’s testimony dominates the story. The movie also contains strong sexual language and many gratuitous vulgarities that are often incidental to the telling of this story. The movie’s worldview not only is feminist, it is also humanist. For example, instead of turning to God and His biblical principles, or to the Church, to fight the evil men harassing her, the heroine turns to an increasingly secular, politically correct legal system. Because of lawsuits like the one shown in this movie, the legal system has become so politically correct and onerous that it is now inimical to decent relationships among all people, not just relationships between men and women.

No one needs a pro-feminist movie about the plight of women from Hollywood any more. What people really need is a movie protecting us from the radical feminism running rampant all around us. It would be nice, for instance (and morally awesome), if Hollywood made a really strong pro-life movie against abortion. Now, that would be really pushing the envelope, but in a positive direction!

All in all, therefore, the content in NORTH COUNTRY is excessively gratuitous and problematic.

Moviegoers must be media wise about all movies or television programs, including a political movie like NORTH COUNTRY. Be careful what you watch. You can do this by consulting MOVIEGUIDE® regularly.