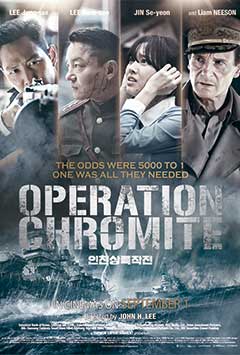 OPERATION CHROMITE is an exciting, fictionalized historical thriller from South Korea set in 1950. The movie follows World War II General Douglas MacArthur, now working with the United Nations, trying to figure out how to invade North Korea at a point called Inchon. The operation is risky, due to treacherous waves, a narrow channel and imposing cliffs. So, General MacArthur sends an eight-man team of South Korean spies to steal an important map from North Korea’s evil military commander at Inchon.

OPERATION CHROMITE is the latest in an outstanding series of action movies from South Korea. Its action scenes are highly inventive and extremely exciting. As always, Liam Neeson is magnetic onscreen as General MacArthur. The cast of Korean actors are impressive. They give life to the director’s vibrant vision of an action movie with meaning. OPERATION CHROMITE has a strong moral, anti-communist worldview, with strong Christian references. Extreme caution is advised because of some very strong, intense violence, brief foul language and an implied reference to reincarnation. That said, OPERATION CHROMITE deserves high praise for its exciting heroics and positive messages.

(BBB, ACACAC, CC, FR, L, VVV, M) Very strong moral, anti-communist worldview with strong Christian elements, undercut by a brief implied reference to reincarnation when two soldiers working together and about to be executed say they will be friends in “the next life”; five obscenities (including two “f” words); several moments of very strong war violence, such as people are shot point-blank in the head, and several scenes feature people beaten with extremely bloody faces, and strong intense violence, such as numerous shootouts, scenes of hand-to-hand combat, a wild car chase with shootings, an epic gunship battle as well as an epic tank assault, people killed by explosions, communist soldier uses waitress as a human shield during a gun battle, two men are choked to death with one hung by lynching, implied torture, and a scene where a female spy is punched with great force three times, though she survives; no sexual content; no nudity; no alcohol; no smoking or drugs; and, a lot of duplicity and backstabbing by the evil North Korean communists.

Set in 1950, OPERATION CHROMITE is an exciting, fictionalized historical thriller from South Korea that tells the tale of how famed General Douglas MacArthur devised a top-secret, heroic spy operation that led to great success in the Korean War during the Battle of Inchon. OPERATION CHROMITE has a strong moral, anti-communist worldview with strong Christian elements, undercut only by brief foul language, some intense violence and one brief, implied reference to reincarnation.

The movie follows World War II General Douglas MacArthur (Liam Neeson), now working with the United Nations, as he tries to figure out how to invade North Korea at a point known as Inchon (now spelled Incheon). The combination of treacherous waves, a narrow channel that’s easily blocked by enemy ships, and imposing cliffs that have to be climbed by ladders all wind up making this a mission with 5000-to-1 odds against it.

However, before he launches the invasion, code-named Operation Chromite, MacArthur sends an eight-man team of spies led by Hak-Soo Jang (Jung-Jae Lee), a South Korean Navy Lieutenant, to steal an important map from the office of evil North Korean Communist Senior Colonel Gye-Jin Lim (Beom-Soo Lee). The map details the precise location of underwater mines in the channel.

As the team tries one inventive tactic after another to gain control of the map, the villainous Lim is ready for them at every turn with his array of evil forces.

OPERATION CHROMITE is the latest in an outstanding series of action movies produced in South Korea. Its action scenes are highly inventive and at times rival the amazing derring-do of the Indiana Jones movies, with one gasp-inducing action sequence after another.

Better yet, the story is a powerful and profound remembrance of the immense sacrifices and miraculous efforts that went into achieving success at Incheon. The script makes several strong attacks on the evils of Communism and in defense of Christianity, without ever feeling heavy-handed or forced in any way.

In one key moment, two men about to be executed for spying for the good side say they will be like brothers in “the next life.” This dialogue implies reincarnation, but the rest of the movie has strong Christian references.

Also, there is a lot of duplicity and backstabbing by the North Korean communists. However, the movie takes a strong stand against North Korea’s communist tyranny.

Liam Neeson largely delivers orders and a couple speeches, yet is as always magnetic onscreen. The cast of Korean actors are all impressive, giving life to the director’s vibrant vision of an action movie that has meaning.

Viewers shouldn’t let the prospect of subtitles scare them off, because OPERATION CHROMITE is a very rich, entertaining time at the movies. Every action sequence is a heroic one, with heroes for the good clearly defeating great evil. In several key dialogue scenes, the characters attack communism and its false principles of equality with gusto. The movie also promotes the importance of sacrifice to the point of near-martyrdom. This message is powerfully expressed, in dramatic fashion.

Extreme caution is advised because of some very strong, intense violence, brief foul language and an implied reference to reincarnation. That said, OPERATION CHROMITE deserves high praise for its exciting heroics and positive messages.