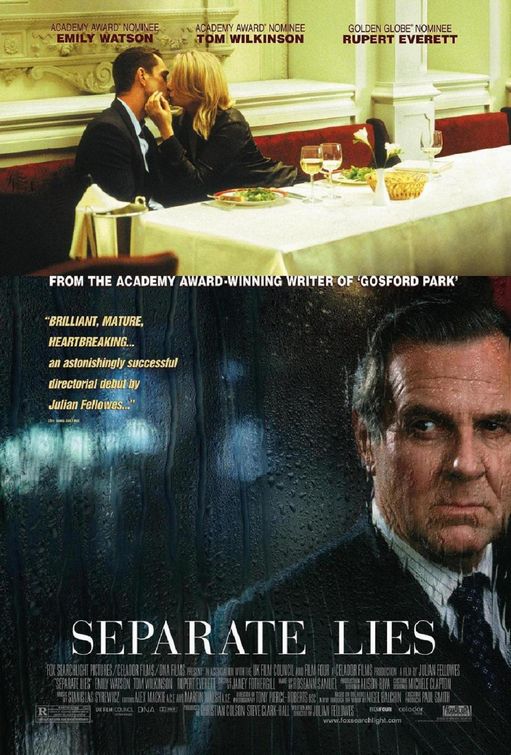 The movie SEPARATE LIES centers on James Manning, a London attorney who has bought a house in the country with his wife Anne. When a villager is killed in a hit-and-run, James suspects the neighborhood lothario, William, of striking the cyclist with his car. James does an informal investigation and brings William to confess. The plot thickens when Anne confesses that she was driving the car. James, who had previously urged William to turn himself into the police, now tells his wife to keep quiet. His feelings grow more complicated when he learns that his wife and William are having an affair. Now his loyalties are divided, and James must choose between justice, vengeance and loyalty.

SEPARATE LIES contains some strong instances of forgiveness, as characters demonstrate remarkable mercy. His wife, however, is bold in her adultery and eventually leaves her husband to care for her cancer-stricken lover. Fortunately, however, none of the affair is filmed. SEPARATE LIES deals with difficult, painful realities that adults must sometimes face. With some occasionally strong language, it’s not a perfect movie, but it’s an interesting and provocative one for mature audiences only.

(B, C, FR, PaPa, LL, V, S, N, AA, MM) Light moral worldview with several strong examples of forgiveness, including woman decides to confess a crime she committed, though perhaps a bit antinominian, and one character develops a pagan moral sentiment and wallows in an extramarital sex; eight obscenities and eight profanities; punch thrown; woman openly carries on adulterous affair, and man fornicates after separation; woman in bra; drunkenness; no smoking or drugs; and, deceit, lying to police, lying by evasion and criminals flee scene of crime.

SEPARATE LIES, written and directed by the Oscar winning writer of GOSFORD PARK, retains that movie’s fascination with the British upper class but delves deeper into the trust that develops between married people.

James Manning, played by Tom Wilkinson, is a powerful attorney in London. He has recently bought a weekend house in the country with his wife, Anne, a homemaker who stays involved in the community, played by Emily Watson. When the husband of James and Anne’s housekeeper is killed in a hit-and-run accident, James suspects the neighborhood lothario, William Bule (Rupert Everett), of striking the cyclist with his large Range Rover. James does an informal investigation and brings William to confess.

James, being a man of the law, urges William to turn himself into the police. The plot kicks into high gear when Anne tells James that she was, in fact, driving William’s car and that she is the one who killed the man. Faced with the prospect of seeing his young wife go to jail, James changes his advice and advises Anne to keep quiet. Further, she tells James that she and William have been having an affair. Now, obviously, James’s loyalties are divided, and he must choose between justice, vengeance and loyalty.

Tom Wilkinson takes the movie to a higher level than the script merits. As with his role for IN THE BEDROOM, Wilkinson plays a conflicted man who means well but has extremely difficult moral choices to make. His portrayal of the principled but conflicted man is reminiscent of Graham Greene novels, such as THE HEART OF THE MATTER. In light of the several recent Greene adaptations that were botched, this reviewer couldn’t help but think that Julian Fellowes would be an excellent shepherd to guide his nuanced books onto the screen.

As it is, SEPARATE LIES is not as compelling or complex as a Graham Greene novel. There are some strong instances of forgiveness, as characters demonstrate remarkable mercy towards all sorts of sin. In the final moments, James’s forgiveness could be confused for weakness, but this ambiguity is part of what makes the movie so interesting and realistic. Whether forgiving or weak, he’s a character that will stick with the audience for a while.

Anne, James’s wife, is bold in her adultery. Initially she tells James that she will break off the affair, but she fails to do so. Then, when her lover develops a deadly case of cancer, she leaves James to care for the lover. The movie does not justify her decision, but her character shows no remorse for her selfish deed. Effectively, none of her affair is caught on camera, as the movie is mostly from James’s perspective.

SEPARATE LIES features some occasionally strong language. It is an adult movie, not because it is especially obscene, but because it deals with the difficult, painful realities that many adults must face. We live in a sin-stained world, and even many Christians couples face dilemmas like that of James and Anne. Fortunately, James and Anne are forgiving people, even though Anne cannot kick away her sinful crutch. The movie opens for discussion some difficult issues, and it probes them just deeply enough to let the audience fill in their thoughts. It’s not a perfect movie, but it’s an interesting and respectable one for mature audiences.