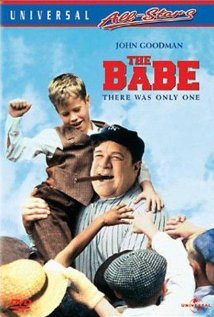 THE BABE depicts baseball legend Babe Ruth as a prodigious baseball talent who wasted his life on excesses of drinking, womanizing, cussing, violent outbursts, and disrespect for authority. Although rated PG-13, this movie cannot be recommended for family audiences because of its foul language and extremely negative role model.

THE BABE traces the life of Babe Ruth from childhood in a Catholic orphanage to his death. It depicts Ruth as a prodigious talent who drank, womanized, cussed, raged, and rebelled against authority. John Goodman is no William Bendix, and this rendition pales in comparison to the original film. Goodman plays Babe Ruth as a drunken, foul-mouthed, self-centered, insensitive braggart. Where there should have been “heart,” there were only examples of how not to live your life. THE BABE comes off like a buffoon, always demanding the spotlight and continually making obnoxious jokes (his favorite is asking someone to pull his finger before he expels gas). He also exhibits a complete lack of sportsmanship, which is an appalling example for any young people involved in sports.

This is not a family film. The offensive language and negative role model will anger parents and not edify children. THE BABE is typical of Hollywood’s current tendency to wallow in the most negative aspects of American heroes, which makes for lousy entertainment and bad history. For superior family entertainment, rent THE BABE RUTH STORY starring William Bendix. THE BABE is an embarrassment to both baseball and filmmaking.