THIRTEEN CONVERSATIONS ABOUT ONE THING 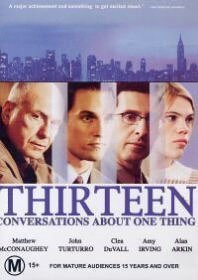 THIRTEEN CONVERSATIONS ABOUT ONE THING is a brilliant movie that is very funny and quietly very moving. It has a Christian point of view. An ensemble piece, the movie focuses on a series of dialogues between a science professor and his wife, two young cleaning workers, a hotshot young lawyer, and the manager of an insurance claims office and his employees. Their lives intersect in different ways, including a traffic accident, the celebration of a winning case, the downsizing of a company, and the criminal behavior of one character's son.

THIRTEEN CONVERSATIONS has a Christian worldview and is a biblical treatise on happiness, which suggests that one of the best ways to happiness is to bring joy to other people by doing good things for them. This can be as simple and easy as smiling at a stranger, the filmmakers propose. Despite some strong foul language and a minor scene where the criminal son injects heroin into his veins, THIRTEEN CONVERSATIONS is enjoyable to watch. One of the best parts is Alan Arkin's wonderfully comic performance as the insurance claims manager, a pessimist irritated by the sunny disposition of one of his employees

(CC, BB, H, LL, V, S, A, DD, M) Christian worldview, including happy man with sunny disposition says, "Thank the Lord," and brief scene in church where hymn is sung and pastor quotes James 5:11, the King James version, plus strong moral, biblical messages and some humanist elements, including brief talk of Fate, which is implicitly rebuked; at least 12 obscenities (including some "f" words), one GD and 3 mild profanities; implied auto accident with woman's apparently lifeless body lying on ground and man with cut on forehead, his conscience wracked by guilt, deepens his cut with a razor blade; implied adultery as woman in underwear gets dressed; no nudity but woman in underwear; alcohol use and bar scene; smoking and man appears to inject heroin; and, man leaves scene of traffic accident, purse snatching, pessimism rebuked, depressed woman expresses suicidal thoughts but later bounces back, and pessimist tries to get revenge on an optimist by firing him.

THIRTEEN CONVERSATIONS ABOUT ONE THING is a brilliant movie that is very funny and, ultimately, quietly very moving. It is also another in a long line of strongly Christian movies this year. It also contains several Oscar worthy performances, not only by the actors but also in the scriptwriting and directing departments. One hopes that it finds the audience that it deserves.

An ensemble piece, THIRTEEN CONVERSATIONS is a treatise on happiness. As such, it suggests that one of the best ways to happiness is to do good things for other people. Doing a good thing can be as simple and easy as smiling at a stranger.

Basically, the story of THIRTEEN CONVERSATIONS focuses on a series of dialogues between people, interspersed with a couple of monologues. Invariably, one person in the dialogue will have an optimistic outlook on life while the second person will express a pessimistic one.

The three pessimistic people in the story are John Turturro as a science professor who’s cheating on his wife, a young cleaning woman named Dorrie played by Tia Texada and Alan Arkin as Gene, the sour manager of a small insurance claims office at a big corporation that’s losing money.

Dorrie works with another young woman, a Presbyterian named Beatrice. Beatrice has a very sunny outlook on life, but, while trying to do a good deed for a male client who attracts her, she gets hit by a car driven by a young hotshot attorney named Troy, played by Matthew McConaughey. Thinking he’s killed the woman, Troy leaves the scene of the accident.

Earlier that evening, Troy, who had just won an important case, had a conversation with sour Gene at the bar where Troy was celebrating with his colleagues. Gene advises Troy not to be so happy, that fate can step in and crush Troy’s happiness at a moment’s notice. After hitting Beatrice, Troy becomes wracked by guilt and tries to bury himself in his work.

Back at work, Gene becomes increasingly annoyed at one of his employees, a constantly happy man named Wade, played by William Wise. No matter how bad things get, Wade always has a positive attitude and a smile on his face. He even says “Thank the Lord” at one point. All of this irks the older Gene to no end, because Gene is a hard-working, lonely and divorced man, whose estranged son is a heroin junkie and a criminal.

After complaining several times to another employee (played by Frankie Faison), Gene decides to teach Wade a lesson by downsizing him to make the budget cuts his boss has requested. After Wade leaves, however, Gene keeps running into him, but Wade still has the optimistic disposition that Gene hates. Like Troy, Gene also becomes wracked by guilt. He decides to set things right with Wade.

Meanwhile, after recovering from her accident and learning the client could care less about her, Beatrice expresses thoughts of suicide to Dorrie. You were right, she tells Dorrie, life isn’t fair. Later, however, in a positive, well-written scene, Beatrice tells Dorrie how a simple smile from a stranger led her to give up such negative, immoral thoughts. Thus, Beatrice has taken to heart her pastor’s reference to James 5:11 of the Bible, which says, “We count them happy who endure.”

THIRTEEN CONVERSATIONS is edited like the acclaimed violent thriller PULP FICTION, with scenes weaving in and out of time. This technique brilliantly manages to keep viewers engaged with the story. It also serves to highlight the movie’s funny parts, which consist mostly of Alan Arkin as Gene doing a slow burn while William Wise’s Wade uses a smile to get through the day. Thus, if someone gets bored with one story, they can watch the other stories unfold, or they can become thoroughly engrossed and entertained by the War of Wills between Gene and Wade. Arkin seriously deserves an Academy Award nomination for his performance here.

The shots with Beatrice singing in her church choir, her pastor quoting James 5:11, Wade’s acknowledgement of God, and the movie’s morally uplifting tone give THIRTEEN CONVERSATIONS a Christian worldview. As Bible readers should know, joy is one of the fruits of the Holy Spirit (see Galatians 5:22). As Bible readers should also know, Jesus Christ tells us in Matthew 7:12, “Do to others as you would have them do to you.” THIRTEEN CONVERSATIONS tells us that giving joy to others by fulfilling the Golden Rule of Christ is the best way to happiness, in this life if not in the next.

Regrettably, however, this movie contains some strong foul language and a scene where Gene’s estranged son injects himself with heroin. Consequently, it’s a movie meant for older teenagers and adults.

Watch THIRTEEN CONVERSATIONS ABOUT ONE THING:

Rating: R for some language and brief drug use