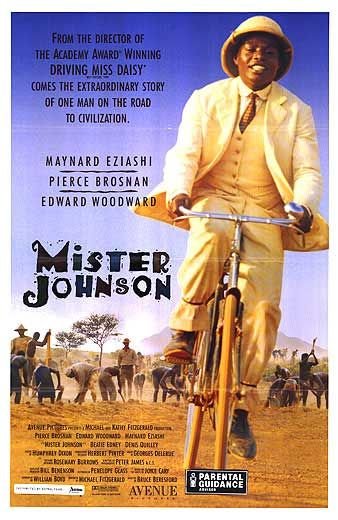 Set in colonial British West Africa in the early 1920's, this jewel of a film tells the story of a young mission school-educated Nigerian who worships Mother England.

(L, V, S) Less than five obscenities & profanities; some violence; some racial slurs in context of the historical time and place; some sexual references and innuendoes.

Set in colonial British West Africa in the early 1920’s, this jewel of a film tells the story of a young mission school-educated Nigerian who worships Mother England. Mister Johnson is the chief clerk of an English district officer, Harry Rudbeck, who is determined to build a 100-mile-long road through the wild African bush despite considerable economic and geographic obstacles.

The film provides a subtle, delicate character study of Mister Johnson, largely through the use of various individuals who serve as foils to flesh out the complex personality portrait of this intriguing protagonist.

We first find Mister Johnson with his soon-to-be wife. Laughing and making sexual remarks as she washes clothes in a pond, they wed a short time later. For the most part, Mister Johnson is exuberant, glib and carefree, with a measure of diligence included. These traits stand Mister Johnson well, as he encounters one adversity after another in the course of his career.

Harry Rudbeck, a very proper Englishman, becomes downhearted from lack of monies to finish his road project. Mister Johnson, in his dauntless exuberance, suggests using revenues from other sources. Then, says Mister Johnson, when next year’s road finances arrive, Rudbeck can simply transfer funds to the already used accounts. However, when an English official arrives and finds the ledger discrepancies, all road funding is cut off, and Rudbeck is forced to let Johnson go.

Mister Johnson next works for Sargy Gollup, the racist proprietor of a General Store who patronizingly takes Johnson under his wing. The two develop a fairly close relationship, with Gollup telling Mister Johnson he’s “okay, for a nigger.” In fact, Gollup says he thinks of him as an Englishman, the highest compliment he can pay Johnson.

However, again, Johnson gets into trouble with his superior. Throwing a raucous party, Johnson invites all his friends into the General Store where he dances and sings on the countertop. The noise wakes Gollup who appears on the scene and breaks up the party. When he confronts Johnson, who has been drinking, Johnson slugs him. Of course, this action costs Johnson his job.

Johnson goes back to help Harry Rudbeck build the road. In a cleverly-worked out arrangement with the native help, Mister Johnson tells them they will receive a mysterious, priceless prize for cutting away so much brush a day.

Based on a novel by Irish author Joyce Cary, MISTER JOHNSON is not so much a portrait of racial tension as it is an examination of the dying spectre of British colonialism and its mixed effects on a nation. Cary’s masterful hand at painting an intriguing human being is really what makes this film worth viewing.

The cinematography of the vast African terrain, the musical composition of engaging native rhythms, along with superb acting, provide a fascinating, often amusing glimpse into a society on the threshold of sweeping change. In addition, the biblical adage, “Be sure your sin will find you out” in Numbers 32:23, probably applies best to the disarming, feckless Mister Johnson as he meets his comeuppance at film’s end.