THE MAN IN THE IRON MASK 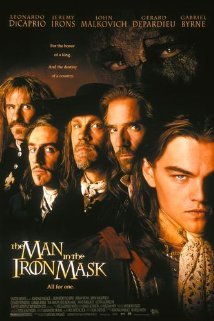 Randall Wallace writes and directs THE MAN IN THE IRON MASK featuring a Grade-A cast in a further adventure of the classic story of the three musketeers. Aramis, Athos and Porthos plot to overthrow a wicked king by replacing him with his lost twin brother. Containing some violence, mild sexual situations and no nudity, it has many epic qualities, grand ideas and Christian ideals.

The Mel Gibson-directed BRAVEHEART revitalized epic filmmaking by demonstrating great morality and uplifting ideas. A large part of its success was due to the screenwriting effort of Randall Wallace, who penned

the words and outstanding virtue of its central historical freedom fighter, William Wallace. His writing earned him an Academy Award nomination and a MOVIEGUIDE award, which Mr. Wallace accepted at our awards ceremony two years ago with dignity, grace and a clear Christian witness. Now, keeping his epic qualities, grand ideas and Christian witness, Mr. Wallace returns with a writing and directing effort titled THE MAN IN THE IRON MASK. The movie features a Grade-A cast, including teen sensation, Leonardo DiCaprio, in a further adventure of the classic story of the three musketeers written by Alexander Dumas.

The year is 1622 in Paris, France, ruled by a young, but heartless King Louis XIV played by Leonardo DiCaprio. Voiceover narration by a former musketeer turned Priest, Aramis (Jeremy Irons), tells us that a prisoner, numbered 64389000, the Man in the Iron Mask, was discovered among the records of the Bastille, recently destroyed by hungry rioting citizens who despise their King. The King is deaf to the cries of his people and gives them spoiled food. All the former musketeers, Aramis, Athos (John Malkovich) and Porthos (Gerard Depardieu), have left the service of the current King, but Captain D’Artagnan (Gabriel Byrne) still stands guard in allegiance, hopeful that Louis will reform his character.

To ease his discomfort over the recent riots, the King holds a lawn party and invites dignitaries, soldiers and other distinguished guests. His eye is caught by a young woman named Christine (Judith Godreche), the fiancé of the son of Athos, Raoul, a soldier currently on leave. Louis hopes to win Christine and so sends Raoul to the front lines of battle, where he is killed. Louis then takes Christine as his mistress. This and other hideous acts so infuriate the former musketeers that they plan mutiny against their King. D’Artagnan holds fast to his allegiance to the King, and Athos swears he will kill D’Artagnan on their next meeting.

The Three Musketeers don disguises and visit an off-shore prison to visit the Man in the Iron Mask. There, Aramis poses as a priest to visit the Man, telling him he has come to rescue him and release him from prison. The Man in the Iron Mask hides under the cloak of Aramis, and they flee. Back in Paris, at a secret hideout, the mask is removed, and the audience discovers that the man under it is Felipe, a twin brother of the King. Felipe has no idea he is a twin, and his brother Louis is the King of France. He doesn’t even know why he was imprisoned. Yet, imprisonment has made him sensitive to the misfortunes of others, and the three musketeers plan to replace Louis with Felipe in hopes that peace and order will reign over the land.

Misfortune, danger and swordplay mark the remainder of the movie, as D’Artagnan and Louis discover the plot, revealing deeper secrets which lend the answer to goodness or tyranny over France.

If any movie can bump TITANIC from the number one spot, this movie can. It has action, humor, adventure, lavish costumes, scenic sets and locations, and plenty of drama. Furthermore, it has Leonardo DiCaprio who shows genuine acting promise over his over-hyped performance on the sinking ship. Morally, this movie contains commendable lines and situations. Aramis is introduced praying, and he chastises Porthos for interrupting him. Porthos asks Aramis what is more important than loving a woman, and Aramis answers, “Forgiveness.” Characters in the movie refer to good fortune as “God smiling down on me.” They also give benedictions of “Lord, go with you” and make statements like “We are all God’s instruments.” Furthermore, the movie emphasizes the themes of loyalty, service and self-sacrifice. Like BRAVEHEART, THE MAN IN THE IRON MASK makes a broad statement that service and loyalty to the King of Kings is greater that service to the King, in

this case the despot Louis.

Yet, also like BRAVEHEART, there are situations here that may be inappropriate for younger audience members. While the violence is action oriented and rather bloodless (unlike BRAVEHEART), Porthos is shown as a very lusty man. He continually chases women and tries to seduce them. At one time, he is seen lying down with three women in the hay in a barn, though everyone is fully clothed. Furthermore, the young King Louis is shown as a

lecher, bedding women but not caring for them. (Stealing Christine away from her beloved is very similar to the David and Bathsheba story found in the Bible.) Finally, when Christine understands what Louis did to her lover, she commits an awful sin in retaliation to Louis.

THE MAN IN THE IRON MASK contains some minor errors in direction and story-telling, indicating that Randall Wallace may be better at writing than lensing. The story sometimes jumps ahead leaving some questions left

unanswered, such as “Who is the man that Aramis brought into the prison to replace Felipe?” For many minutes, the audience may believe that that man was the King himself. Furthermore, Wallace fails at times with his humor.

When Porthos cracks a joke, it sometimes seems inappropriate. The audience doesn’t laugh at the joke, but at the timing of it in the given dramatic situation. Other situations seem to indicate a director still in training.

Yet, the grandness of the story, the precision of the cast, and the morality and richness of the tale stand bold and strong, demonstrating that Wallace has a future in epic storytelling. THE MAN IN THE IRON MASK is an honorable movie. It sets a good example of divinely-led human triumph over the face of unjust government.

Watch THE MAN IN THE IRON MASK: