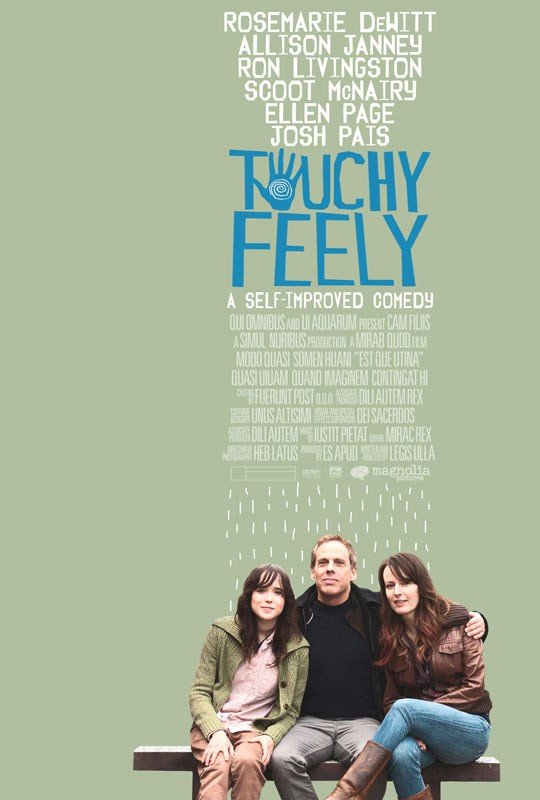 TOUCHY FEELY is a small and light comedy about a quirky Seattle family with relationship and identity problems. Abby is a massage therapist. Her brother, Paul, is an uptight dentist whose practice is floundering. Paul enlists the help of his daughter, Jenny, as a dental assistant. Jenny lives with her father, but really wants to go to college to pursue other dreams. The psychological balance of these three characters begins to unravel. Meanwhile, Abby’s mentor suggests taking Ecstasy with her boyfriend one time to fix their relationship. Alone, Abby takes one of the pills, but her brother takes the other one.

TOUCHY FEELY is short but a bit slow. Despite that problem, the movie’s production quality and acting are high. However, the story is sometimes too vague, too trite, or leads to abhorrent conclusions. For example, taking Ecstasy seems to solve the brother and sister’s problems. TOUCHY FEELY also contains New Age pagan references and strong foul language. And, there is no positive Christian content. All this just confirms the fact that TOUCHY FEELY really has nothing of value to say.

(PaPaPa, FRFRFR, Ro, H, B, Ho, LL, V, S, A, DDD, MM) Very strong pagan, somewhat mixed, worldview with very strong New Age pagan practices (including references to the Japanese/Hindu/Buddhist mystical techniques of Reike and woman tries to meditate in the lotus position, but she’s too upset to do it) that don’t always seem to work, but the taking of the illegal drug of Ecstasy seems to work even better and thus is extolled though people in the real world have died from taking it, with some light Romantic, humanist, and moral content, plus a homosexual reference when woman asks her female massage therapist to marry her because she does such good work, but it’s meant as a joke; 12 obscenities (all but three are “f” words), two GDs, six light profanities, and woman suddenly gets sick and retches into toilet; angry disgruntled dental patient shouts angrily while disturbing a quiet dental office; implied fornication in one scene, boyfriend asks girlfriend to cohabit with him, light talk about a past sexual relationship, and man goes to house of woman he likes but the camera doesn’t enter the house with them; no nudity; light alcohol use; smoking and the taking of the illegal drug Ecstasy is recommended to help people, and two people take a pill and movie suggests it has a positive effect; and, father (who seems to be in a major funk) is co-dependent on his daughter to take care of him, young woman gets fatherly comfort from her sister’s boyfriend because her father seems unable to give it but things seem to change for the good after the father takes a pill of the illegal drug Ecstasy, and female massage therapist develops a phobia about touching skin, but she seems cured of it after she takes a pill of Ecstasy.

TOUCHY FEELY is a small and light, but well-produced and acted, comedy about a quirky Seattle family with relationship and identity problems. However, the premise of the piece is not immediately clear in the script or the production, though there does seem to be some kind of method to its idiosyncratic “madness” as the ending plays out. Even so, one can’t really say if the whole effort was worth it ultimately. Worse, the movie promotes the illegal drug Ecstasy as a solution to one’s internal problems. Also, much of the movie contains New Age healing methods, particularly the Japanese mystical system of spiritual and physical healing called Reike.

In the story, there are three family members. Abby is a massage therapist. Her brother, Paul, is an uptight dentist whose practice is floundering. He enlists the help of his daughter, Jenny, as a dental assistant. Jenny lives with her father, but really wants to go to college to pursue other dreams.

The inner psychological balance or foundations of these three characters begins to unravel.

First, Abby suddenly develops an uncontrollable aversion to bodily contact. Abby’s phobia not only makes her massage vocation impossible. It also hinders her relationship with her boyfriend, who wants her to cohabit with him.

Then, Abby’s brother, Phil, suddenly seems to develop a healing touch when he agrees to see a young singer introduced to him by his daughter, Jenny. The singer, who’s a little bit chubby and introverted, clearly has a crush on Jenny, but Jenny’s too concerned about her father to pay attention. In fact, Jenny’s suffering her own identity crisis as she veers between caring for her shy, melancholy, and awkward father and wanting to strike out on her own. Also, Jenny has a secret crush on her aunt’s boyfriend.

Eventually, the father’s sudden, magical healing touch turns out to be too good to be true. Meanwhile, Abby seeks advice from her mentor, an older woman who practices the New Age “healing hands” method from Japan called Reike. The woman gives Abby two pills of Ecstasy and tells her to take them with her boyfriend.

TOUCHY FEELY is short but a bit slow. Despite that problem, the movie’s production quality and acting are high. Even so, the script and the production don’t telegraph where the movie’s heading to viewers. Then, when you finally learn where the movie is heading, you might question whether the whole thing was really worth it. Making matters worse, the movie is so subtle that it seems much too vague until the third act comes along.

Ultimately, the movie’s basic premise seems to come down to the theme that all three of the main characters – the father, the sister and the daughter – are stuck in a rut. Thus, the father is a repressed, nerdy sort of guy who’s stuck in his role as a grounded, but staid, dentist. Meanwhile, the daughter is stuck in her role as the cook, comforter and work assistant for her needy, co-dependent father. Finally, the sister or aunt thinks her relationship with her boyfriend is just a passing phase in her life. She also imagines herself as an open-minded, free-spirited healer, but she finds that she’s just as uptight in her own way as her brother.

[SPOILERS FOLLOW] The big problem with this story, however, is that, eventually, two of the main characters, the father and the sister, use the illegal drug Ecstasy to free themselves from the things holding them back. Thus, the father needs the drug to loosen up while the sister needs it to get over her apparent fear of settling down with the boyfriend. Also, it turns out that the father’s daughter doesn’t really need to start a romantic relationship with her aunt’s boyfriend. She just needs someone to show the kind of fatherly compassion that her uptight father has been unable, up to now, to give her. Thus, the movie’s last shot shows everyone settling down to a good old family dinner with the young singer who has the crush on the daughter, who’s now ready to proceed with her life. All’s well that ends well, apparently.

Though the New Age practices depicted in TOUCHY FEELY don’t always seem to work, they are otherwise depicted in a positive way, which is abhorrent. In the end, however, it’s the use of Ecstasy to get over one’s phobias, depression, awkwardness, and neuroses that is the most abhorrent thing in the movie. Essentially, the movie’s premise is that taking Ecstasy cures one’s psychological ills.

Of course, the truth is that only by healing your broken relationship with God through Jesus Christ, by the power of the Holy Spirit, can you truly begin to exorcise your own personal demons and heal your corrupt and sinful heart, heal your psychological hurts and fragmentation, and heal your relationship with your family and other people. Immersing yourself in the teachings of Jesus Christ, as depicted in the four Gospels and the writings of Christ’s disciples in the New Testament, is a big part of that process. As is your fellowship with other Christians both inside and outside of church. In John 13:34, 35, Jesus Christ encourages His followers to love one another. Obviously, you can’t do that if you have no contact with other Christians. Also, Jesus Christ gives the mantle of leadership and the Holy Spirit to His apostles in John 13:20, 15:16, and 16:1-15. He also tells His apostles and followers in Matthew 28:20 to teach His disciples the principles that he taught them while He lived, when He died on the Cross, and after His physical resurrection.

For these reasons, we not only immerse ourselves in the wonderful and totally righteous teachings of Jesus in the four gospels in the New Testament. We also immerse ourselves in the magnificent, enlightening, and transformative New Testament writings of the first leaders that Jesus appointed to shepherd his first followers. So, there is no need to follow any New Age, Hindu, Buddhist, or other Non-Christian practices, theology, and philosophy, much less take any illegal drugs, because we have the Bible, which includes the words of Jesus Christ and His apostles.

TOUCHY FEELY also has some strong foul language to complement its pagan, immoral, false worldview. Of course, the movie doesn’t mention God, Jesus Christ, or the Bible in any positive way. All this just confirms the fact that this abhorrent movie really has nothing of value to say to anyone.