"Is Your Heart Pure?" 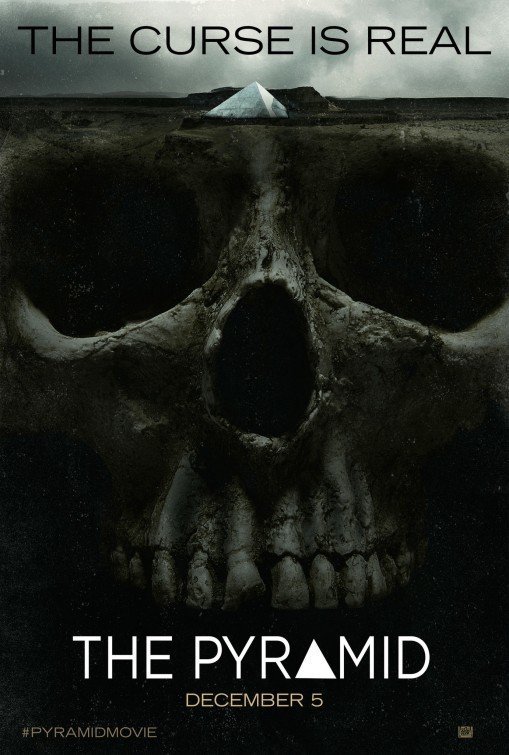 THE PYRAMID is a poorly done horror movie. It follows a team of archaeologists who discover an enormous pyramid submerged under the Egyptian desert. As they try to recover a lost NASA rover, they investigate and get lost within an intricate labyrinth inside the pyramid. As they go further and further in order to find freedom, the team begins to realize that a sinister mythical creature is out to get them. As they start to realize the evil supernatural phenomena happening inside the pyramid, the team begins to believe the ancient Egyptian pagan beliefs.

THE PYRAMID has a pagan worldview, with occult elements attached to it. It brings to life ancient Egyptian pagan sacrifices, traditions and rituals. The ancient Egyptian mythical creature in THE PYRAMID looks satanic. The protagonists begin to believe Egyptian pagan, occult mythology as they encounter the creature. In addition to its abhorrent pagan worldview, the movie is very poorly done. Except for some brief scares and suspense, THE PYRAMID has a silly, predictable plot and horrible cinematography. There’s also very strong violence and foul language in THE PYRAMID.

(PaPaPa, FRFRFR, OOO, LLL, VVV, S, NN, MM) Very strong pagan worldview using Egyptian mythology, with very strong occult content; at least 27 obscenities and profanities, including one or two “f” words; very strong, extreme or graphic violence, with a scene that contains a building block from the pyramid landing on a character, another with character landing on large nails and then gets attacked by evil hairless cats, and another scene of an ancient sinister creature ripping the heart out of one the main characters; no depicted sex, but man voyeuristically spies on woman with camera, plus two characters sharing a kiss; brief natural nudity, when woman changes, but the audience only sees her naked back, but the camera zooms in to display her upper nudity inside her shirt; no alcohol or drunkenness; no smoking or drug use; and, a lack of compassion for others by some of the characters.

THE PYRAMID is a poorly done archeological horror movie about a team investigating a hidden Egyptian pyramid, who are hunted by a mythological creature.

A team of archeologists discovers a massive pyramid concealed under the Egyptian desert. As they attempt to recover a lost NASA rover, they investigate and get lost within a complicated labyrinth inside the pyramid. As they venture further and further in order to escape, the team shortly recognizes that a sinister mythical creature is hunting them.

It goes without question that THE PYRAMID contains a pagan worldview, with occult elements. Throughout the movie, two of the archaeologists, as they decipher the ancient Egyptian hieroglyphics inside the pyramid, speak about pagan sacrifices, traditions and rituals that ancient Egyptians practiced. As they start to realize the evil supernatural phenomena happening inside the Pyramid, they begin to believe the ancient Egyptian paganism. It isn’t until two of the members of this archeological team witness an ancient Egyptian pagan ritual described in one of the hieroglyphics that they undoubtedly believe in the occult. They witness an ancient Egyptian mythical creature rip the heart of another member of this archeological team, in order to weigh it on a scale to verify its purity, and determine its after-life destination.

The Scriptures explicitly speak against and condemn paganism. For example, in the first epistle to the Corinthians, the apostle Paul states, “No, I imply that what pagans sacrifice they offer to demons and not to God. I do not want you to be participants with demons. You cannot drink the cup of the Lord and the cup of demons. You cannot partake of the table of the Lord and the table of demons. Shall we provoke the Lord to jealousy? Are we stronger than he?” Paganism is in complete violation of the one true God and is associated with demonic activity.

Sadly, THE PYRAMID not only contains a pagan worldview, but also its overall production and entertainment quality is really poor. The poor quality mainly derives from the horrible plot narrative and bad cinematography.

THE PYRAMID’s plot is indisputably atrocious and, for the most part, pretty predictable. The plot is horrendous because it is lacking creativity due to its simplicity. There is nothing complex or interesting about the narrative and characters. The meaningless plot doesn’t allow viewers to experience a profound connection with the story and characters. Despite the horrible plot, there are a few suspenseful scenes that create fear and horror in the viewing audience, but they are insufficient to make THE PYRAMID worthy.

Furthermore, the cinematography is also dreadful and a nuisance. In an attempt to be creative, creators of THE PYRAMID designed the movie to be seen from a recording camera of one the characters. In other words, the viewer sees the movie from the perspective of a character’s recording camera. Sadly, this uncreative idea fails miserably because most of the scenes in the movie are blurry, and it’s hard to see what’s happening. There is also a tendency to switch back and forth from a character in the movie filming to regular cinematography. This camerawork is definitely annoying and takes away from the movie’s quality. The director and creators of THE PYRAMID should have used either one of these techniques to film the movie, but not switch back and forth with both.

Overall, THE PYRAMID is an awful horror movie that contains paganism as the dominant worldview, plus some ancient occult beliefs and practices. THE PYRAMID is ultimately abhorrent, but it does give Christians an opportunity to engage in dialogue about paganism and what the Scriptures say against it.