A TALE OF LOVE AND DARKNESS

"Parsing the Bond Between Mother and Son" 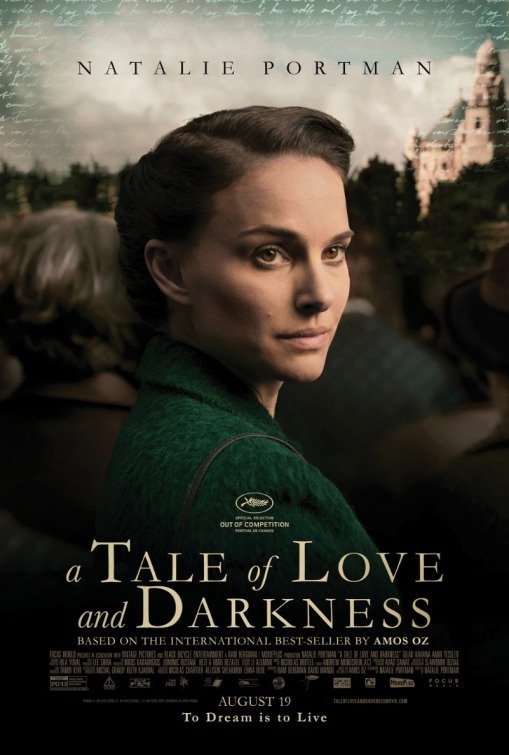 (B, C, Ab, VV, S, N, A, D, M) Light moral worldview about a Jewish woman’s growing depression and its effect on her young son includes scenes where mother teaches moral lessons to her son, plus a Christian monk is shown in one scene, and there’s some Anti-Semitic sentiment expressed by Arabs and other countries; strong, sometimes disturbing violence includes character commits suicide by burning in a barn, child hit by a playground swing, bombs can be heard going off in the distance, historical footage shows injured or dead people when Israel was bombed in 1947, a woman hits herself as punishment, a boy hits himself as punishment, boys bully another boy in the school yard and shove him around, pigeon wounded by a gunshot, boy shot dead by a sniper, woman shot dead by a sniper, soldier uses his pistol to kill Jews, and then it’s implied he kills himself; some brief sexual content includes a woman is referred to as a “whore” and it’s implied men are selling women for sex in one scene; natural upper male nudity during a bath; one scene shows drinking wine at dinner; a few scenes depict smoking; and, a mother scolds her daughter for not marrying into a wealthy family, man talks about “betting” a woman during a poker game, a married man sees another woman secretly in one scene.

A TALE OF LOVE AND DARKNESS, based on the autobiography by Israeli writer Amos Oz, tells the story of his mother, Fania’s, influence in his life and her tragic end. While providing interesting insight into the struggles of Israel after WWII, the movie lacks a cohesive story and contains some disturbing content and startling violence, so extreme caution is advised.

Daughter of an upperclass family in Poland, Fania dreamed of marrying a strapping, handsome man like the ones she read about in her library of fanciful novels. Instead, she ends up with a struggling Jewish author, living in Jerusalem during the violence that followed Israel’s independence in 1947.

Amos is mesmerized by his mother’s stories and moral tales. He places her on a pedestal his father, Arieh, can scarcely reach. Arieh is consumed with academia and publishing his books, but all five copies find themselves ignored on the shelves of the local bookstore. In a rush of joy one day, he arrives home with news that all of his books have sold. Amos later learns that a family friend, a best-selling author of romance novels, had bought them out of pity for his father.

Young Amos is witness to the verbal abuse Fania’s mother, his grandmother, heaps on her daughter for not creating a better life for herself. Fania’s response is to physically punish herself for not living up to her mother’s expectations, something Amos begins to copy in later scenes.

As Israel gains its independence, violence breaks out. This inspires Arieh to join the Israeli army. Amos also does his part along with all the other children by foraging for food and collecting glass bottles for homemade bombs. As explosions are heard in the streets, the Oz family opens up its basement to neighbors as they cram together in a makeshift shelter amongst the shelves of Arieh’s massive personal library.

Slowly, Fania becomes overwhelmed by it all. When her best friend is killed by sniper fire, it seems to accelerate her depression. She confines herself to the house, under the care of her husband and son. Her only glimmer of hope is Amos, but even he’s unable to rescue her from the spiraling depths of depression.

Natalie Portman’s writing and directorial debut is fitting, given her own Israeli heritage. It is clear this is a highly personal project for her. She seems to embrace the role of Fania Oz as more of a catharsis for her own curiosity than anything else. While offering a series of somewhat interesting vignettes glimpsing the intimate struggles of Israel’s independence post WWII, the movie lacks a cohesive story or any logical sequence that explains Fania’s deepening depression. There’s some mild humor here for those who understand Israeli or Polish tradition, but it probably will be lost on viewers from other countries. The acting performances are all good, but ironically, it’s Portman’s performance that lacks any luster, casting a thin, mysterious cloud over the whole movie.

Although the setting is Israel, the Jewish religion is not addressed except that Jews are being slaughtered and persecuted by Arabs throughout parts of the movie. A boy playing soccer in an alley is shot dead by an unseen sniper, and a woman hanging up the wash suffers the same fate. Historical footage of war-torn scenes play briefly, and bombs are occasionally heard going off in the distance. Fania often tells Amos stories, which are displayed on screen as Amos imagines them. Suddenly, the dull cinematography gives way to a world of vibrant color, but the subject matter of such stories ranges from suicide to sexual slavery to inclusiveness of those whom we are taught to hate.

Because of its more disturbing content, MOVIEGUIDE® advises extreme caution for A TALE OF LOVE AND DARKNESS.

Watch A TALE OF LOVE AND DARKNESS: