"The Monster Is Also a Victim" 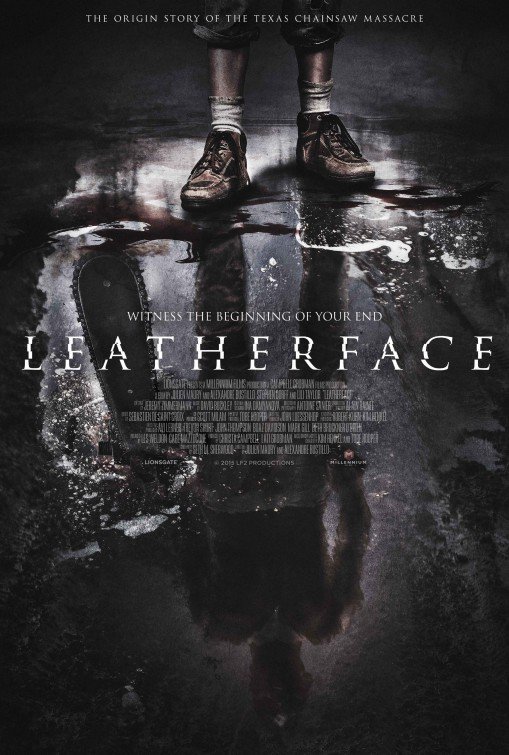 LEATHERFACE is a new prequel to 1974’s THE TEXAS CHAINSAW MASSACRE. For 10 years, the youngest, best boy of matriarch Verna Sawyer’s murderous family has been locked in terrible Texas reform schools and behavioral hospitals for young delinquents and lunatics. It’s all because his two older brothers lured the local Texas Ranger’s daughter to her death. Renamed Jackson to hide him from his crazy mother, the boy escapes the current facility with three other teenage inmates. They take along a new nurse who befriended Jackson. Things go from bad to worse as the vengeful Texas Ranger pursues them.

LEATHERFACE is filmed with more money and care than other similar horror movies. That said, it still devolves into a nasty bloodbath. Also, it depicts the title character as a good boy who’s driven insanely violent and heartless by the evil society around him, including the deranged Texas Ranger. Thus, it has the typical nihilistic attitude of many modern horror movies and contends American society is at fault, especially Texas. LEATHERFACE also has lots of strong foul language and some other lewd, disgusting content.

(RoRoRo, APAPAP, PCPCPC, B, LLL, VVV, SS, NN, AA, DD, MMM) Very strong Romantic, Anti-American, politically correct worldview shows how a nice boy becomes a heartless, chainsaw-wielding killer because of the evil American society in which he lives, in this case, Texas of the 1950s and 60s, including the leading Texas policeman is vengeful and deranged, and the next major policeman turns out to be corrupt, and the boy’s violent cannibalistic family turns out to be his only true refuge, despite the kindness of a nurse, who always tries to do the right thing but whose kindness is ultimately undone; at least 56 obscenities (more than 33 “f” words) and 12 strong profanities; very strong sometimes gruesome violence includes large teenage boy forces mean hospital officials neck down onto broken glass in window, electric shock treatment, heads crushed with rock, bloody decapitation with a chainsaw, bloody murders, girl falls down hole, and her bloody face and torso shown from a distance, teenager shot in cheek, and mother sews it up for him, dead body thrown to hogs, implied cannibalism, man’s head caved in with large hammer or sledgehammer, etc.; depicted fornication, woman kisses dead corpse found in trailer, and passionate kissing; rear female nudity in sex scene, upper male nudity and female cleavage; alcohol use; smoking; and, revenge, children mistreated, bullying, corrupt Texas Rangers, evading the police, kidnapping, head of mental hospital/reformatory for teenagers is mean.

LEATHERFACE is a new prequel to 1974’s THE TEXAS CHAINSAW MASSACRE, which shows how the chainsaw-wielding ghoul of the Sawyer family became such a vicious, evil monster. Needless to say, perhaps, LEATHERFACE is a super-violent, gruesome, abhorrent vehicle that also carries a depressing message that a couple of corrupt Texas policemen are a major factor in driving the title character toward violent nihilism and cannibalism.

Set in 1955 and 1965, the movie opens with Verna, the matriarch of the Sawyer clan, trying to force her youngest son, Jed, to take a sledge hammer and murder a personal enemy of the family. Jed can’t go through with it, so one of his delinquent brothers does.

Cut to another day when two of Jed’s brothers lure a young teenage girl into the barn so she can fall into a pit below the floor that contains a bunch of farm implements. The local Texas Ranger happens to be the girl’s father. Also, he’s long hated Verna and her family, suspecting them of many crimes. He puts the older boys in jail and Jed into state reformatory institutions and hospitals for juvenile delinquents and young people with mental, behavioral problems.

Ten years later, a young new nurse named Lizzy tries to befriend Jed, who’s been given the name Jackson to hide him from his evil mother. She also tries to help another teenager named Bud, who’s big and fat and is teased mercilessly by one of the nastier teenage boys in the institution, a creep named Ike.

One night, chaos breaks out in the institution. Ike, Bud, Jackson, and Ike’s mean girlfriend, Clarice, escape in the confusion after Bud murders the mean head of the mental hospital, who liked to give Bud and other inmates electric shock treatments. Ike and Clarice also kidnap Lizzy, the nurse, and take her with them. Now, they’re all pursued by authorities, including the deranged Texas ranger who’s still out to avenge his daughter’s death. The situation goes from bad to worse for Jackson. Eventually, it molds him into the chainsaw-wielding fiend called Leatherface.

Though it’s clearly a Grade C horror movie, LEATHERFACE seems filmed with more money and care than usual for such theatrical releases. Also, it doesn’t go straight for the gruesome gore like might be expected. It actually has a story to it and is well directed. That said, the movie still devolves into a nasty bloodbath. Also, it depicts the title character as a good boy driven insanely violent and cruel by the evil society and people around him. Not only is the head of the mental and behavioral institution, and the system that spawned him, evil, so is the Texas Ranger. Finally, in the third act, it’s revealed that a nice deputy who disagrees with the Ranger’s methods is himself corrupt. The only truly nice person is the nurse, but [SPOILER FOLLOWS] her kindness is ultimately undone, and she ends up dead.

Thus, LEATHERFACE not only has the typical nihilistic attitude of many contemporary horror movies, especially those rated R. It also has a liberal/leftist worldview that contends American society is at fault, especially, in this case, Texas of the 1950s and 60s. In addition to all this, LEATHERFACE has lots of strong foul language and some other lewd content that’s disgusting.