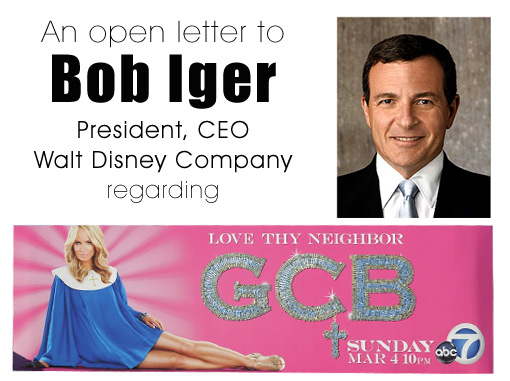 I, and many other Christians, find the program GCB on Disney/ABC deeply offensive. I’m personally requesting that you take it off the air.

When I worked for Disney in the early 80s, the company had very strict policies about treating “guests” with respect. The “cast member” was considered a more important part of the show than the food or the attractions. If a cast member had asked a guest if his wife was good Christian b**** (mother dog), he would not have remained employed for ten minutes.

Has company policy changed? Is Disney/ABC not part of Disney?

In years past, the major studios voluntarily adhered to the Motion Picture Code requirement, “No film or episode may throw ridicule on any religious faith.” This was not written to favor Christianity, but to uphold the value of human life and faith. I have no problem with serious open debate over the tenants of different faiths, but ridicule is demeaning. It labels a group of humans as something less than human. I’d be horrified if Disney/ABC started demeaning Jewish women as mother dogs. Shortly before my birth the demeaning of Jews led to unspeakable horrors.

I expect there to be small independent filmmakers who want to demean Christians. I’m stunned that the company I was once so proud to work for would be the one to demean Christian women as mother dogs in the title of a prime-time program.

When I graduated from college in 1973, the only place I wanted to work was for Disney. I had worked summer jobs at Disney World while in college. I loved that there was a company dedicated to serving families with wholesome entertainment. I considered Walt one of my role models. For years, my children have been proud to tell their friends, “My Dad was once a Disney artist.”

Last summer, I took my children and grandchildren to Disney World. I frequently buy several tickets to Pixar movies on opening day. I  don’t separate how you treat me on Disney/ABC from how you treat me at Disney World or in theaters. If you elect to continue airing GCB on Disney/ABC television, you may as well spit on me at your theme parks or in theaters. I’m married to a fine Christian woman and have many Christian women friends (and no, I don’t sleep with them or even want to). I don’t know of one Christian woman who deserves to be labeled a b**** (mother dog). I have two female dogs I wouldn’t even use that term on.

I hope that one day Disney/ABC will produce television programs with the heart of movies like UP. The brief musical sequence showing the story of Carl and Ellie was one of the greatest love stories ever put on film. THE INCREDIBLES was James Bond and Superman family-style (BRILLIANT family entertainment). Why can’t Disney/ABC television be as respectful and entertaining? If Disney/ABC specialized in high-quality, clean, inspiring family entertainment NBC, FOX and CBS would be trailing Disney/ABC by a wide margin. You’re missing a golden opportunity to step out of the competition to be the most offensive network and become trusted by families to provide clean, wholesome, inspired entertainment (“imagineering”). That was Disney’s strength for many years. Pixar has shown it still works very well in the 21st Century.

I’m praying that the name Disney will once again shine around the world as a brand respected for the finest in family entertainment.

GCB does NOT help. The only people GCB endears the name Disney to are the ones who hate Christians and enjoy seeing them mocked.

Is that the audience Disney wants to pursue in the 21st Century? That audience won’t fill up your theme parks and won’t keep Pixar movies profitable. The majority of Americans consider themselves Christian and don’t appreciate being mocked.

One of the primary commands of Jesus Christ is to “do unto others as you would have them do unto you.” Would you appreciate a program called GOOD DISNEY B****S? Would you like the Disney Corporate offices portrayed as a den of hypocrisy and immorality?

I hope that you’ll help put Disney back on the path to dignity and respect by dropping GCB.