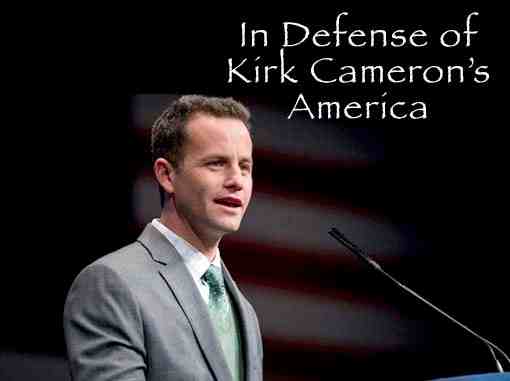 Recently, a few hate-filled activists directed their bigotry against actor Kirk Cameron of “Fireproof” and TV’s “Growing Pains.” Kirk’s offense? He dared to say that God tries to protect us from self-destruction by warning us against such things as homosexuality and adultery and by declaring marriage to be a sacred union of one man and one woman.

So much for the godless, phony left-wing virtue of “tolerance”!

As Kirk said in his response, “I should be able to express moral views on social issues. . . without being slandered, accused of hate speech, and told from those who preach ‘tolerance’ that I need to either bend my beliefs to THEIR moral standards or be silent when I’m in the public square.”

Kirk Cameron was exactly correct when he said on the “Piers Morgan Show” that the God declares marriage to be a sacred act between one man and one woman. As some pundits humorously quip, “God created Adam and Eve, not Adam and Steve!”

Contrary to what the haters might say, Jesus Christ Himself preached what Kirk Cameron said about marriage and homosexual lust.

In Matthew 19:1-12, Jesus quotes Genesis 1:27 and Genesis 2:24, saying, “Haven’t you read that at the beginning the Creator ‘made them male and female, and said, ‘For this reason a man will leave his gather and mother and be united to his wife, and the two will become one flesh’? So, they are no longer two, but one. Therefore, what God has joined together, let man not tear asunder.”

Earlier, in Chapter 5 of Matthew, Jesus says he didn’t come to Earth to abolish God’s Law, but to fulfill it. He adds, in verse 19, “Whoever practices and teaches these commands will be called great in the Kingdom of Heaven.”

Thus, in teaching these things, Jesus affirms the Law of God in Chapter 18 of Leviticus in the Five Books of Moses. In that passage in Leviticus, God explicitly warns Moses and the Israelites that adultery, homosexuality, incest, bestiality, paganism, and child sacrifice are all self-destructive, abusive and abhorrent.

Jesus explicitly says in Mark 7:20-23, “What comes out of a person—that defiles him. For from within, out of people’s hearts, come evil thoughts, sexual immoralities, thefts, murders, adulteries, greed, evil actions, deceit, promiscuity, stinginess, blasphemy, pride, and foolishness. All these evil things come from within and defile a person.”

Radical leftists and extremists such as those who condemned Kirk Cameron like to talk about love, hope, change, and other platitudes they don’t really mean, but do they ever define these values? Except in ways that cast scorn on their political enemies while self-righteously extolling their own arrogance and power?

Well, Jesus Christ and His apostles define them.

In the New Testament, Jesus talks about loving God with all our mind, heart, and soul. He also commands us to love our neighbor. In 1 Corinthians 13:4-7, Paul defines true Christian love for us:

“Love is patient, love is kind. Love does not envy, is not boastful, is not conceited, does not act improperly, is not selfish, is not provoked, and does not keep a record of wrongs. Love doesn’t delight in evil, but rejoices with the truth. It bears all things, believes all things, hopes all things, endures all things.”

Thus, Jesus Christ teaches us to tell our neighbors to turn away from self-destruction and cruelly abusing others to believe the Gospel of Jesus Christ, be baptized by the Holy Spirit and filled with His power and start doing good.

In other words, the hope and change that America really needs is for her citizens to turn away from evils like adultery, rape, homosexuality, lying, arrogance, theft, murder, and malice and to rejoice in the Truth of the Gospel of Real Love – Jesus Christ.

Kirk Cameron was perfectly correct when he said homosexuality is “unnatural” and “destructive.”

Finally, our annual analysis of the movie box office shows that movies with no homosexual content whatsoever make the most amount of money.

Given all these facts, why is anyone in the mass media of entertainment still promoting homosexuality and condemning people like Kirk Cameron when they speak out against it unless they themselves have been trapped by the “lust of the eyes, the lust of the flesh and the pride of life” (1 John 2:16)?

Especially when their own audience isn’t buying what they’re selling?

Loving people all over the world should work to heal those trapped in the lust that is never satisfied, so they can really love, by learning how to give, share, and care —  as Jesus Christ demonstrated in His Life on earth and in His Resurrected love for all mankind.