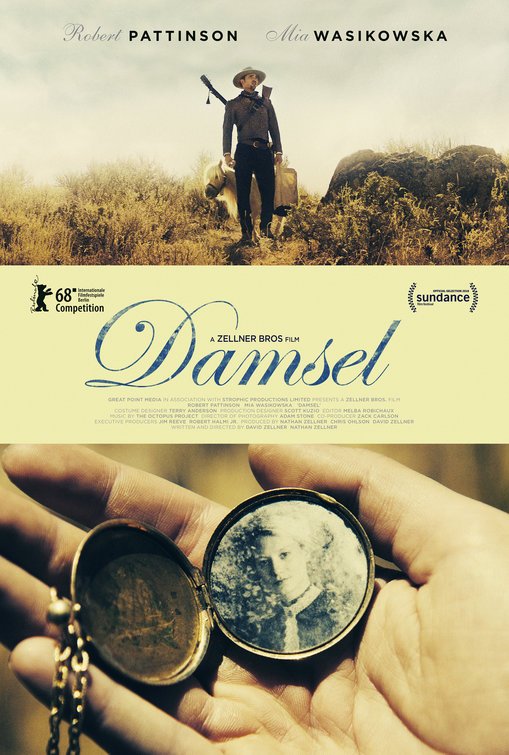 Set in the Wild West sometime in the 1800s, DAMSEL centers on Samuel Alabaster and his quest to marry Penelope, the love of his life. On his journey to Penelope, he picks up items for his proposal and marriage: a dwarfed pony, a ring and a pastor named Parson Henry. With his possessions in tow, Samuel and Henry meet an assortment of characters common to classic Western movies. All Henry wants is a new beginning after the loss of his wife and child during childbirth. He believes going west will give him a clean start. As time passes, the viewer’s expectations are challenged. Eventually, the story reveals that the characters and situations aren’t all they seem to be. This leads to a surprising turn of events.

DAMSEL is painfully slow. Though it’s labeled a comedy, it’s more ridiculous and dumb than humorous. The writing is poor and stilted. Opportunities for well-crafted dialogue are substituted with vulgar imagery and language, along with anachronisms. Finally, DAMSEL has an abhorrent humanist, nihilistic worldview that makes light of Christianity, life, death, love, marriage, and meaning.

(HHH, AbAbAb, FeFe, LLL,VV, S, NNN, AA, M):
Dominant Worldview and Other Worldview Content/Elements:
Very strong humanist, nihilistic movie where a pastor becomes the story’s focus but all he believes and the choices he makes run counter to biblical principles and nothing in the Bible (even the physical book itself) is held in high regard and the literal pages of the Bible are used for toilet paper, kindling and tissues, plus nothing else in the movie is held in high regard either (including death, life, sex, marriage, and love), love doesn’t last long, life is meaningless and hopeless, and strong feminist elements where the only female is completely self-sufficient and even stronger than many men in the movie;
Foul Language:
At least 24 mostly strong obscenities, 16 strong profanities, two scenes of a man urinating (one is graphic), and there’s a conversation between two characters about whether a man needs to “go number one” or “number two”;
Violence:
Strong and light violence includes man shown being hung by a noose, man shown with part of his scalp missing, man falls from rocks and hits his head on rocks that become sprinkled with his blood, man shot in the head and then shot four times post-mortem; man shot in the back with an arrow and then blown up by dynamite;
Sex:
Man talks about his woman being good at “lovemaking,” and it’s implied man is masturbating while looking at a picture of his loved one;
Nudity:
Man’s private parts are briefly shown from a distance as he urinates, and man’s bare chest is shown;
Alcohol Use:
Preacher is an alcoholic and constantly needs a drink for “medicinal purposes” or because his “nerves are shot,” and everyone in the movie drinks, and it’s portrayed as a way of life in the Wild West;
Smoking and/or Drug Use and Abuse:
Woman usually has a pipe on her and is seen smoking it;
Miscellaneous Immorality:
Very strong miscellaneous immorality such as entire plot is based on one lie a character tells himself and all others he meets, lying is seen as a good thing because it’s a means of survival, story is also based on an attempt to rescue a kidnapped woman and seek revenge on her kidnapper; there are scenes where characters can be racist but their thoughts about a certain culture are proven to be unfounded, and a Christian parson suggests there is no purpose to marriage, but that if marriage doesn’t work out there is nothing wrong with abandoning the commitment and moving on with one’s life.

Set in the Wild West sometime in the 1800s, DAMSEL centers on Samuel Alabaster (Robert Pattinson) and his quest to marry the love of his life, Penelope (Mia Wasikowska). On his journey to Penelope, he picks up an assortment of items for the proposal and marriage, including a dwarfed pony, a ring and a pastor, Parson Henry (David Zellner). With his possessions in tow, Samuel and Henry meet an assortment of characters common to classic Western movies. As time passes, the audience’s expectations are challenged as viewers begin to realize the characters and situations aren’t all they seem to be, which leads to a surprising turn of events.

Western movies are commonly known for their battles between good and evil, man’s triumph in a wild and uncivilized world, the classic Western archetypes and culture types of Indians, damsels, gruff and hardy cowboys, vigilantes, and the archetypal hero. DAMSEL, though a western aesthetically and structurally, defies every single one of those elements. The woman isn’t helpless and, in fact, may be the strongest character in the entire movie. The hero isn’t all he seems to be. The parson isn’t a bulwark of the faith. The Indians aren’t savages but protectors of maidenhood. Finally, in the end, does good really conquer evil? Is there really such a thing as evil, or are people merely misguided? Is there true and undying love or is love something everyone wants but no one can actually achieve? What is life’s purpose if good and evil, love and villainy, don’t actually exist? What does one fight for? What does one live for?

Though the advertisements for DAMSEL hinge on Pattinson and Wasikowska, the first and last person the audience sees is Parson Henry. All Henry wants is a new beginning after the loss of his wife and child during childbirth. He believes going west will grant this clean start. In the movie’s opening conversation, a man turns to him and says that where you’re coming from and where you’re going are the same, equally hard, rotten, and weird. So, don’t look for your salvation anywhere.

Parson Henry becomes a drunk and gets roped into Samuel’s quest for love, during which he has his values challenged and nerves shaken. Henry makes a go at a happy ending but ends up in the same exact place he was in the beginning: at a bar in a deserted town, where all the other hopeless men and women reside as they live out their miserable existence. The faith Henry proclaims to serve (Christianity) and convictions he has are changed, depending on his circumstances, and the Bible he carries is more for image than anything else. Using the pages as toilet paper, tissues or kindling, the movie suggests the only thing the Bible is good for is basic human functions in the material world. There is no larger purpose. Though evident in other areas of DAMSEL, the movie’s humanist worldview can be determined most clearly by the character of Parson Henry. Does he find salvation?

DAMSEL answers this question by arguing that there is no salvation. At its core, this movie is an existential comedy, pointing out the fleeting aspects of human life and the wild world in which man lives. By destroying classic western tropes, the movie argues life isn’t as cut and dry as man likes to make it, but rather is a farce. Life is meaningless. When a character dies there is no mourning, there is no emotional connection to them, and it happens without any drama or even purpose. By choosing a pastor to be the center of the story and by portraying his faith as meaningless, the writers are saying that even this “human conception” of God is worth nothing, because there’s nothing outside of this world, and certainly no morals or standards.

Casting Pattinson and Wasikowksa, actors known for playing serious and romantic roles, likewise serves the movie’s humanist, nihilistic themes. They aren’t playing serious or romantic roles in DAMSEL at all. Nothing is as it seems, and the characters in the movie, as well as the audience, have to accept that and move on.

In one respect, DAMSEL captures some of the beauty of the Old Testament Book of Ecclesiastes. Thus, the movie concludes that life is futile, man is vain, and there’s nothing new under the sun. That said, the movie fails to take this one step further, as Ecclesiastes does. Though Ecclesiastes argues that this life is fleeting and hard, “the end of the matter” (in other words, life’s purpose) is to “fear God and keep his commandments, for this is the whole duty of man” (Eccles. 12:13).

DAMSEL is painfully slow. Though labeled as a comedy, it’s more ridiculous and dumb than humorous. The writing is poor and stilted, substituting opportunities for well-crafted dialogue with vulgar imagery and language, and sprinkling in some anachronisms throughout its story. Scene transitions are roughly cut and reminiscent of a high school movie project. Pattinson and Wasikowska do the best work they can with the material and direction provided to them, but the movie fails to deliver anything substantial, which, since the movie’s rather nihilistic, may be the point. MOVIEGUIDE® advises extreme caution for all viewers due to the movie’s abhorrent, unacceptable nihilistic, humanist, anti-biblical worldview, which makes light of Christianity, life, death, love, marriage, meaning, and life’s purpose.