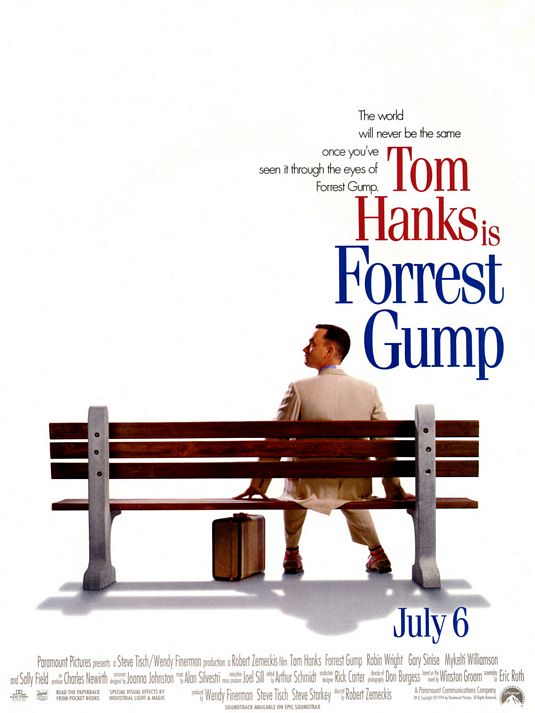 In the movie by the same name, Forrest Gump is an innocent in an America that slowly lost its innocence after World War II. Through the eyes of our dim-witted hero, we experience the fast-paced mayhem and madness of three rolling decades and witness Gump's accidental turn as star football player, war hero, athlete, millionaire, and lover. FORREST GUMP is an ingenious comic ride, one done with a sense of what is truly good in this world, but regrettably marred by vulgarities, implied sexual immorality and drug abuse.

(C, B, LL, V, S, N, D, C) Christian worldview with a presupposition of God and probing references to Heaven, Jesus, God's presence, God, and God's will for our lives versus our will and our fallen nature as well as a biblical perspective toward to wages of sin; 10 obscenities, 2 profanities & several gross vulgarities; brief action violence; several instances of implied fornication; brief, partial nudity; substance abuse; and, one character finds redemption in love of God.

In the movie by the same name, Forrest Gump is a lovable, dim-witted hero in a picaresque tale of America during three of its most tumultuous decades (50’s, 60’s, 70’s). From Elvis Presley to JFK to President Nixon, Forrest Gump meets them all, becomes a football star, war hero, athlete, and millionaire, and in doing so gives us a comic and rueful overview of political and social events and persons that have entered into our national consciousness. Although Southerner Forrest Gump has an IQ of only 75, his optimism and generosity place him in extraordinary circumstances during extraordinary times. We travel with Forrest on his comic ventures as he becomes an All-American, joins the Army and wins the Congressional Medal of Honor, goes on to own a conglomerate, becomes a celebrated runner, and wins his one true love.

This is a delightful adult fairy tale in the tradition of BEING THERE, RAINMAN and the Orthodox Holy Fool stories. It is well-crafted in every facet, combining special effects technology and storytelling to give us an extremely entertaining film. Tom Hanks is uncannily ingenious as Forrest. Due to the decades explored, there are gross vulgarities and obscenities, implied fornication, as well as depicted drug abuse. However, all of it leads to the overwhelming conclusion that a wanton lifestyle is a destroyer.