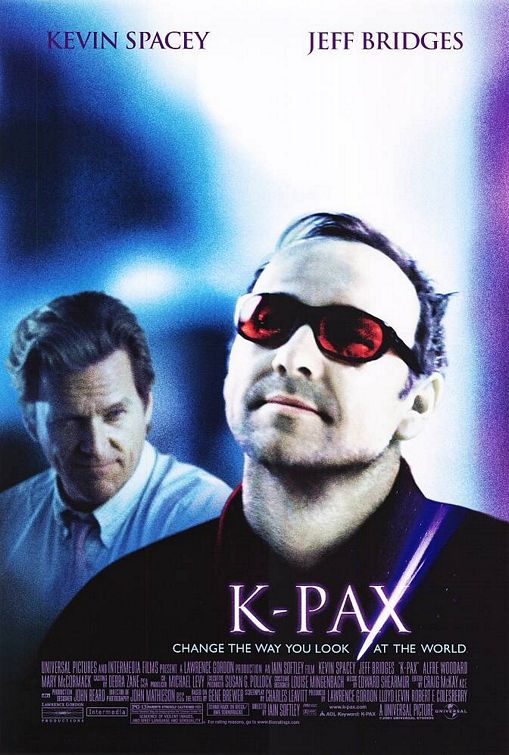 Kevin Spacey stars in K-PAX as a mysterious patient who is transferred into the psychiatric care of Dr. Mark Powell (Jeff Bridges). Resistant to drug therapy, the man insists he is a visitor from the distant planet, K-Pax. Dr. Powell finds this man, calling himself Prot, to be “the most convincing delusional” ever. Consumed with curing his patient and discovering the truth, Dr. Powell launches a investigation into Prot’s beliefs, background and private pain. Prot has a strange and wonderful effect on the other patients in the Psych Ward. Could he be who he says he is? Or, is he a deeply disturbed man carrying a terrible secret?

Well-acted and directed, K-PAX is fraught with intense themes, some foul language and wacky, false notions about reality. Even so, the messages of hope, redemption and the importance of family make this an enjoyable mystery. The ending is open to interpretation and, therefore, sure to disappoint a few. K-PAX may seem otherworldly but, ultimately, it promotes the value of healing more than scientific cures, reconciliation more than pride, and family more than the fast-paced careers. It’s a down-to-earth message for a society intent on moving at light-speed.

(HH, BB, EvEv, Pa, C, Ab, LLL, V, A, D, M) Humanist worldview with solid moral & evolutionary elements which alternately attack & ultimately promote the value of families & relationships within society; references to evolution, including belief by central character that man’s future is uncertain & that man lives only once, but must re-live all of his mistakes as evolutionary life repeats itself for eons (many viewers may not pick up on the fact that the movie seems to actually show that the character’s beliefs are not founded on real knowledge); also, man alleges that his alien planet has a higher developed society with no need for marriages, families or government, & that children are raised by all, but, although he says that knowledge of right & wrong is a constant throughout the universe, the movie indicates (perhaps too subtly) that man probably does not know what he’s saying; one man searches for redemption & doesn’t find it, another man doesn’t search for redemption & finds partial redemption, mental patient reads passages from the Bible in one scene, including 1 Cor. 13 from the New Testament, & brief reference to Jesus Christ includes anti-Christian remark that even Christians do not follow His teachings; at least 25 mostly mild obscenities, 1 “f-word” & several profanities, including 2 or 3 strong ones; mild violent content includes mugging (mostly off-screen), implied choking, wrestling with patients, & strangulation of an evil attacker, talk of past suicide & man shown walking into water until it covers his head, plus oblique description of rape & murder of a mother & the death of a child, with flashback scenes obscuring victims & crime scene (blood primarily shown on hands); no sex scenes, but brief kissing & talk of man getting girlfriend pregnant; brief scene of married couple in bed, some cleavage shown; drinking; talk of suicide attempt; and, intensely emotional scenes involving patient under hypnosis, tense scene of threat of danger to children, man shows psychiatrist that he needs to give his patients hope & not just drugs, & psychiatrist is a workaholic who neglects his family but finally partially realizes what’s important in life.

A mysterious patient (Kevin Spacey) is transferred into the psychiatric care of Dr. Mark Powell (Jeff Bridges). Resistant to drug therapy, the man insists he is a visitor from the distant planet, K-Pax. Dr. Powell finds this man, who calls himself Prot (pronounced with a long “o”), to be “the most convincing delusional” he’s ever met. Consumed with curing his patient and discovering the truth about Prot, Dr. Powell launches a fascinating investigation into the man’s beliefs, background and private pain.

Meanwhile, Prot is having a strange and wonderful effect on the other patients in the city’s Psych Ward. He also has an interesting meeting with a group of high-level astronomers. Could he be who he says he is? Or, is he a deeply disturbed man who carries a terrible secret?

Prot is neither disturbed nor frustrated by his treatment as a crazy person; he is merely enjoying his visit to this planet. His fixation on fruit is particularly hysterical. Soon, he explains to Dr. Powell that he intends to return to K-Pax on July 27 at 5:51 a.m. He also makes it clear to the other patients that he is only able to take one person back with him. People who have little or no hope in their lives now find themselves inspired by Prot’s description of K-Pax and the possibility of going there. (Does that sound familiar?) Dr. Powell, on the other hand, believes something terrible may happen to Prot on that date. He races to find his answers before time is up.

Initial impressions of K-PAX (posters, commercials, trailers) might lead people to believe that this is another sci-fi-light in the vein of COCOON, STARMAN or possibly E.T. THE EXTRA TERRESTRIAL, but, K-PAX has darker themes buried within and yet handles the deeper subjects more deftly than most of those previously mentioned movies.

The idea of a foreign visitor to our world is a popular, though some would say overused, concept in movies; so, too, is the storyline involving mental hospitals, psych wards and asylum patients; but, K-PAX convincingly combines these two themes and still manages to make viewers care about these characters. Given K-PAX’s large ensemble cast, this is no small feat. The mystery of this likable stranger attracts the viewer, and the development and complexity of nearly every other character keeps the viewer hooked.

Kevin Spacey gives a terrific performance as Prot (as good as Jeff Bridges’s earlier spaceman role in the 1984 movie STARMAN), and Bridges’ brooding intensity as Dr. Powell is not wasted here. Amazingly, the supporting cast is so good they nearly steal the spotlight from these two talented actors. Director Iain Softley has created a beautiful tapestry of light-filled images, a haunting musical score and believable, but not over-the-top, characters.

That said, K-PAX is fraught with intense themes and some worldview elements that don’t always hang together. For instance, Prot expresses a foolhardy belief in logic-bending evolution and makes other questionable moral and ontological comments. The movie, however, casts grave doubts on Prot’s beliefs at an important point in the story (doubts which the movie’s ending nearly discounts). On the other hand, the messages of hope, redemption and the importance of family and relationships make K-PAX an enjoyable mystery. The ending is open to interpretation, and, therefore, sure to disappoint a few as it will likely enrage others. For those who stay for the short scene which follows the credits, Prot’s connection will be felt in Dr. Powell’s life. (At the screening I attended along with 500 or so viewers, fewer than 20 had stayed to watch this closing scene.)

K-PAX may seem otherworldly, but, ultimately, it promotes the values of hope, healing and redemption more than scientific cures, reconciliation more than pride, and family more than the fast-paced careers we pursue. It’s a down-to-earth message for a society intent on moving at light-speed.