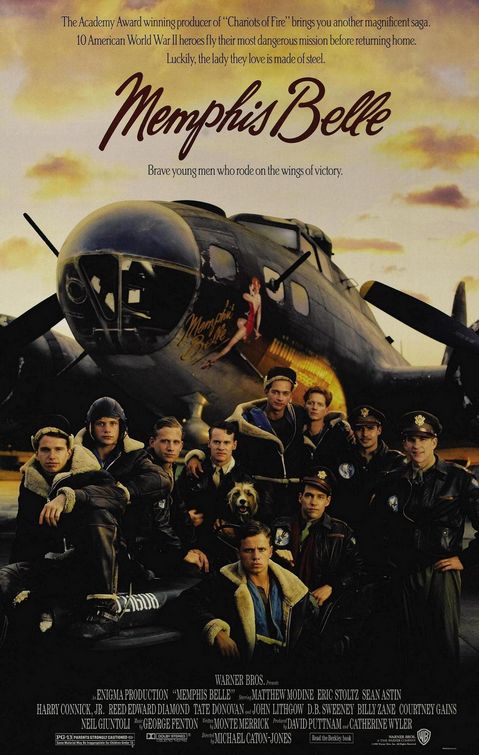 This panoramic motion picture is an arresting combination of suspense and drama that depicts the 25th, and final, mission of ten World War II airmen who flew the B-17 bomber known as the “Memphis Belle”. Stationed in England, the crew had flown 24 heart-pounding missions over Nazi-occupied Europe. If they can survive this last mission, also their most dangerous, they will return home to a hero’s welcome, becoming part of a massive publicity drive to stimulate war-bond sales and boost flagging morale.

The time is May 16, 1943, and the target is Bremen, Germany. The crew members, scarcely out of their teens, are: Dennis, the pilot; Danny, the idealistic Irish-American radio operator; “Rascal”, the ball-turret gunner whose job considered to be the worst is actually the safest, because, although in a small sphere in the underside of the plane’s fuselage, he is huddled against an armor-plated door. Also on board are: Rosenthal, the introspective navigator, whose task is to know the exact position of the aircraft at all times — a highly demanding job requiring pinpoint accuracy and a quick mathematical mind; Clay, tail gunner and sweet-voiced musician; and, Virgil, the top turret gunner and flight engineer with an encyclopedic knowledge of the plane’s mechanics. The crew’s shared experiences have melded them not only into an effective, courageous group of fighting men, but also into an affectionate, caring family.

Conflict arises early between the Commanding Officer of the base and Colonel Derringer, the army’s public relations man, who arrives to extol the crew of the Memphis Belle. Photographing the crew members and planning a U.S. tour after their last mission, Derringer angers the C.O., who insists that before Derringer extols one crew over the others, he read some of the letters from families of deceased men.

On the night before the mission, an anniversary dance takes place. One crew member gets drunk to escape the fear of death, while Virgil (nicknamed Virgin) has sex for the first time (off-screen). During the dance, the captain visits the Memphis Belle and poignantly thanks her for “taking care” of her boys. Then, he asks her to do it one more time.

The flight itself the following day consists of much action and suspense as various planes are shot down until the Memphis Belle becomes the lead plane. Because their target in Germany is obscured, the pilot spends extra time waiting for the clouds to lift. He wants to avoid bombing a school and playground.

A giant flying fortress, the Memphis Belle itself was one of the most impressive flying machines ever seen. Its seven defensive machine-gun positions were considered a significant advance in bomber development during the 40s. The front of the nose, the top turret and the ball turret were made of a then-revolutionary material called Plexiglass. The greatest advantage of the B-17 over previous bombers was that it could carry twice the payload, two tons of bombs, and travel twice as far without refueling.

This is a very well produced movie with an outstanding, well-written script, good acting, and excellent photography. The action shots in the sky as the planes wheel and dive are particularly breathtaking. Worth mentioning as well is the crew’s singing of “Amazing Grace” on take-off. Even though this is a war film, there is little bad language. However, please be cautioned that there is some, plus an instance of drunkenness and off-screen promiscuity.

The film’s most outstanding virtue is its premise: a man’s word is more important than his life. Even in the face of death, a man’s word, whether through an oath, a vow, an allegiance or promise, is more valuable than his life — an invaluable message. This is a finely-crafted film that reflects a time when priorities were more defined, people really looked out for each other and the meaning of the word “hero” was real and undiluted.

Strapped into a narrow, metal airborne fuselage, the crew of the Memphis Belle fought not only the enemy, but also the elements… bitter freezing cold, with temperatures so low their hands would stick to the guns. As individuals, they had to combat mortal fear: as a team, the challenge was to find heroism in the midst of terror — and never, never let the other guys down. One is reminded of God’s words to Joshua : “Be strong and very courageous” (Joshua 1:7). We can all benefit from such heroic examples as these.