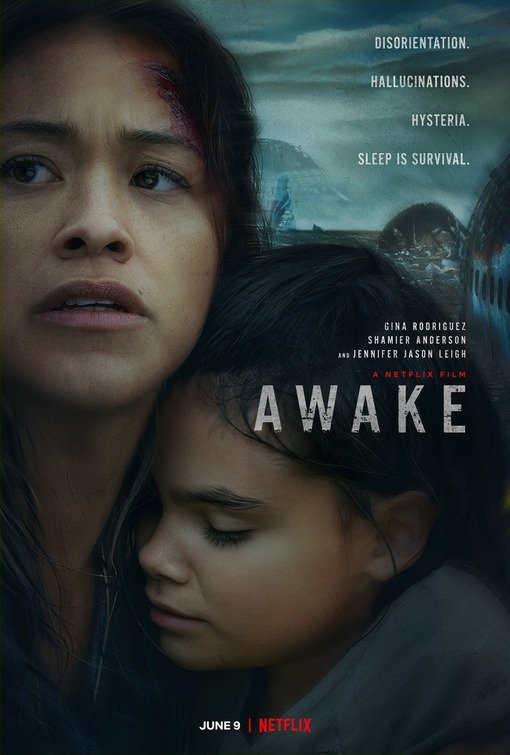 AWAKE is an apocalyptic thriller on Netflix about an ex-soldier working as a security guard. Previously addicted to pills, Jill has lost custody of her teenage son and 10-year-old daughter. However, when an unidentified catastrophe affects every electronic device on earth and renders humanity unable to sleep, people quickly begin to go insane. When Jill realizes that her daughter, Matilda, can still sleep, she must protect Matilda from people who want to use her to find a cure. She also must prepare Matilda to survive on her own.

AWAKE is a rather unimpressive, chaotic movie that fails to capture the viewer’s interest. It borrows much of its plot from your average zombie thriller, with sleep-deprived humans replacing the walking dead. While it has some positive Christian, moral and patriotic elements, they are overshadowed by a strong humanist worldview involving abuse of science, nods to evolution, gory violence, excessive foul language, nudity, drug abuse, and miscellaneous immorality such as theft, breaking and entering, and dysfunctional family elements. AWAKE is an unacceptable, unpleasant and grim piece of entertainment that media-wise viewers will want to skip.

(HH, Ev, Pa, CC, BB, Ab, P, LLL, VVV, S, NN, A, DD, MM):
Dominant Worldview and Other Worldview Content/Elements:
Strong humanist worldview overall includes a strong belief in the power of science at the expense of human life (scientists reach a torturous level of experimentation on patients), a lack of faith on the part of several characters, and a mother trying to protect her daughter with some light evolutionary references including the idea that mankind evolved from apes, a cannibalistic tribe attacks a car full of people, and a nudist colony appears in one scene, slightly mitigated by some overt Christian, moral elements such as a grandmother brings her granddaughter to church where the pastor (who converted and dedicated his life to the service of Christ after experiencing a drug overdose) gives a church sermon, a church family comes together and prays after a catastrophe, grandmother sacrifices her life to save her granddaughter, motherhood is extolled, and there’s the redemption and reconciliation of a mother and her two children, but the people in the pastor’s church rebel and want to sacrifice the mother’s daughter so the family has to run away (the pastor stands firm against the people in the church, however), plus some light patriotic elements where a mother and father both served in the military, and father died serving his country, and mother displays his service flag and pictures of him in the house
Foul Language:
At least 45 obscenities (including at least 20 “f” words) and 11 profanities (including some GD profanities)
Violence:
Heavy violence and gore including a hospital full of patients with serious injuries, two car accidents, two drowning, breaking of store windows, beating, biting, stabbing, strangulation, hanging, electrification (mother and daughter don’t clear the body before shocking her son), more than two dozen shootings (including one suicide), and the torture (offscreen) of an old woman, a chimp (whose brain is fully exposed) and a young girl for the sake of finding a cure
Sex:
No depicted sex, but a teenage boy’s younger sister asks her brother if he has ever “done it,” then tells her mother that he has never had sex, main characters run into a nudist colony, and an escaped convict promises to let a mother go if she leaves her son with him
Nudity:
Characters drive by a nudist colony, roughly 20 people can be seen naked (breasts and backsides visible), woman picks up a car key with a keychain of a naked woman on it;
Alcohol Use:
People partying in the street hold glasses presumably filled with alcohol
Smoking and/or Drug Use and Abuse:
Mother is a recovering drug addict, she steals and sells pills from the research facility at a college, soldiers inject “sanity serum” into their carotid artery (a medical mixture to decrease the effects of not being able to sleep), extreme hallucinations from sleep deprivation (symptoms presented similarly to that of a hallucinogen); and,
Miscellaneous Immorality:
Theft of illegal drugs, vehicles, and a gun, breaking and entering into a community college and a car shop and a government building, accidental kidnapping of a child, mother teaches her daughter survival techniques including how to shoot a gun (for protection and food) and how to siphon gas, and some dysfunctional family elements including a grandmother who has custody of her grandchildren while their mother recovers from drug abuse (husband died serving his country), and a teenage son who wants nothing to do with his mother.

OVERVIEW REVIEW: AWAKE is an apocalyptic thriller on Netflix about an ex-soldier working as a security guard. Previously addicted to pills, Jill has lost custody of her teen-age son and ten-year-old daughter. After picking them up from her mothers-in-law for the day, power suddenly goes out everywhere. Cars stop working, and people soon find out that this unidentified catastrophe has rendered them unable to sleep. People quickly begin to feel the effects of sleep deprivation, and the world slips farther and farther into a state of insanity. When Jill realizes that her daughter, Matilda, can still sleep, she must protect her from those who want to use her to find a cure as well as prepare her to survive in this new world alone.

AWAKE is, overall, a rather unimpressive, chaotic movie that fails to capture the viewer’s interest. It borrows much of its plot from your average zombie thriller, with sleep deprived humans replacing the walking dead. When humanity slips farther and farther into insanity, chaos and violence ensue. Multiple shootings, a murder-suicide, beatings, stabbings, and people being stomped on and hung upside down from trees are just a few examples of this movie’s violent content. Viewers will even see doctor’s doing tests on a chimpanzee whose brain is fully exposed, and a cannibalistic cult attacking a car full of people. Also, around 20 naked men and women can be seen onscreen as a car drives through a nudist colony. Viewers are exposed to full behind nudity and upper nudity.

Regrettably, the violence and nudity do nearly nothing to further the plot and just seemed to be pieced into the story in a sloppy fashion. This, along with more than 40 obscenities and profanities, makes the movie full of gratuitous objectionable content that will turn away many viewers.

While AWAKE falls short of being a quality production, it does include some positive Christian, moral and patriotic elements including a man who shares his testimony of redemption from drug addict to pastor, a church family who comes together and prays after a worldwide catastrophe, the redemption and reconciliation of a mother and her two children, and a military family who lost their father/husband in the line of duty. His mother displays his service flag, and pictures honoring his service and life can be seen throughout the house.

These positive aspects add some redemptive elements to AWAKE. However, they are overshadowed by the movie’s immoral, negative content, including its strong humanist worldview. For example, the movie supports a strong belief in the power of science at the expense of human life where scientists reach a torturous level of experimentation on patients and animals. Also, despite the movie’s Christian content, there’s a lack of faith on the part of the mother and several other characters. In fact, at one, the pastor’s congregation goes crazy and wants to sacrifice the mother’s daughter. This forces them to flee.

AWAKE is an unacceptable, unpleasant and grim piece of entertainment that media-wise viewers will want to skip.