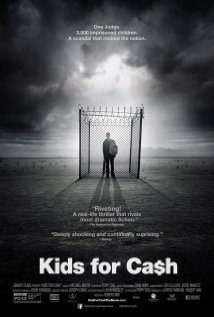 The documentary KIDS FOR CASH is a sad tale of judicial malfeasance and juvenile delinquency. Shortly after the school shootings at Columbine in 1999, Luzerne County in Pennsylvania elected a juvenile court judge who promised to crack down on wayward children. However, many of the cases involved petty crimes such as creating a fake MySpace page. Also, the parents and their children were encouraged to sign a waiver saying they didn’t need a lawyer. The result is that many children were illegally sentenced to serve time in privately-run juvenile detention centers. When one parent questioned the judge’s methods, it was discovered he received millions of dollars in payments from the detention centers. The judge was sent to prison, but what about the families he destroyed?

KIDS FOR CASH is a riveting, compelling documentary. It focuses mostly on victims, but also lets the judge have his say. The movie suggests detention centers are not an effective means of controlling juvenile delinquency. However, it doesn’t offer much to replace them. KIDS FOR CASH also contains brief foul language. Some caution, therefore, is advised.

(B, RoRo, H, L, V, A, DD, M) Light moral worldview, but with Romantic, humanist perspectives that fail to provide the kind of biblical, redemptive solutions that are really needed, including brief politically correct support for the controversial United Nations Convention on the Rights of the Child that the U.S. Senate has so far declined to ratify; eight obscenities (including one “f” word and one “s” word) and one light profanity; some discussion of fighting in school, brief discussion of a suicide, and woman screams at judge outside of courthouse because judge’s actions led to her son’s eventual suicide; no sex; no nudity; no alcohol use but mention of it; no smoking but mention of using drugs; and, convicted judge seems to excuse his actions and some possible antinomian attitudes by documentary that reflects movie’s Romantic worldview.

The documentary KIDS FOR CASH is a sad tale of judicial malfeasance and juvenile delinquency. It’s a compelling, well-done documentary about tragic outcomes, but with a ray of hope. The problem is, the ray of hope is too small, and the movie never offers any real solutions to the problems it illuminates.

Shortly after the school shootings at Columbine in 1999, Luzerne County in Pa. elected a charismatic juvenile court judge, Mark Ciavarella, who promised to crack down on wayward children. However, a significant portion, if not many, of the cases involved petty crimes such as creating a fake MySpace page. In another case, a boy’s parents had unknowingly bought him a stolen motorbike. In both cases, and many other cases, the parents and their children were encouraged to sign a waiver saying they didn’t need a lawyer. The result is that, according to the public record, many children were sentenced to serve time in privately-run juvenile detention centers.

When one parent started to question the judge’s harsher-than-usual sentences, it was discovered that the judge received millions of dollars in payments from the detention centers. Eventually, the judge was sentenced to a long prison stint, but what about the lives and families he destroyed?

KIDS FOR CASH is a riveting documentary. It focuses mostly on the more egregious victims of the strict juvenile court judge’s policies, but also lets the judge have his say. In telling this story, the filmmakers don’t just question how the events occurred. They also question the whole policy of sending juvenile offenders and troubled children to detention facilities, where they often learn how to do even worse crimes and sometimes become addicted to drugs or alcohol. What the filmmakers say here makes a bit of sense. The problem is, the filmmakers don’t really offer an alternative to these detention centers or the tough policies of judges like Ciavarella. According to at least one story in the local county press (http://citizensvoice.com/news/shootings-in-w-b-at-three-year-high-1.1449576), the amount of shootings and youth crime in one city in Luzerne County hit a three-year high in 2012 after the judge left office in 2009.

Thus, it’s important for older people in authority to make sure that minor offenses and petty crimes be punished appropriately and firmly BEFORE such behavior escalates into something worse. Legally speaking, the concept of a restitution program, where an offender must work to pay back his victim and society, is preferable to incarceration, especially for minor offenses or petty crimes such as vandalism, shoplifting, or petty theft. Such a program can even involve community service, such as painting a classroom or painting a park bench. That said, there should be zero tolerance for such things as driving under the influence, violent crimes, or illegal drug sales.

Of course, many of the offenses that came under the Pennsylvania judge’s purview involved offenses that occurred at “public” schools. This idea of government-run public schools is a very bad idea. In Deut. 6:7, Moses gives parents jurisdiction over their children’s education, including their moral learning and discipline, not the government. Thus, ultimately, the parents and the child are responsible. At some point, they must be held accountable.

Furthermore, although the Gospel of Jesus Christ offers us grace and mercy for the sins that we commit (including slander, vandalism, theft, assault, and worse), it also requires repentance. Also, God’s grace and mercy doesn’t abolish legally binding punishments for sinful acts that hurt another person, nor do they do away with God’s justice.

KIDS FOR CASH also contains brief foul language. It also promotes the controversial United Nations Convention on the Rights of the Child, which the U.S. Senate has declined to ratify. Thus, while the movie’s overall worldview seems moral, it’s mitigated by some Romantic, humanist, and light politically correct elements. Some caution, therefore, is advised.

Rent or Buy KIDS FOR CASH: