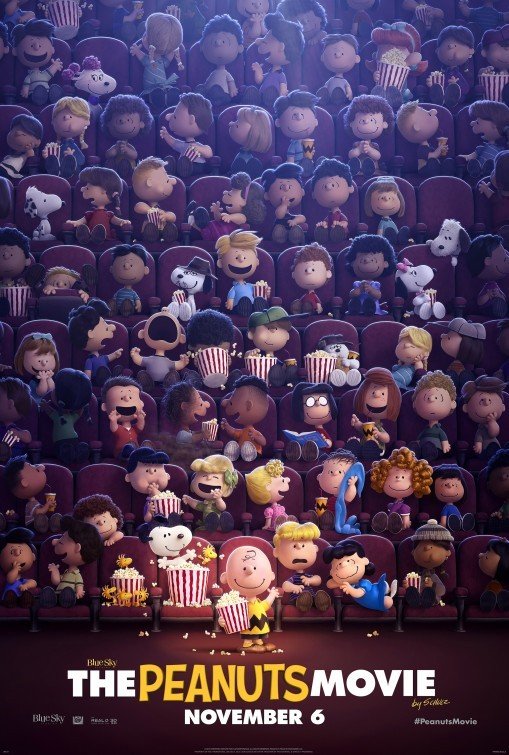 THE PEANUTS MOVIE is a wonderful animated movie based on the beloved comic strip created by Charles Schulz. It brings back Snoopy, Woodstock, Charlie Brown, and the whole gang. In the story, Charlie Brown as usual struggles at being the klutzy, unsuccessful neighborhood boy. It’s a snow day, which means all the children are playing outside instead of sitting in class. When a little girl with red hair moves into the neighborhood, Charlie falls in love and decides to make a good first impression, despite his reputation as a failure.

THE PEANUTS MOVIE is one of the best family movies in recent years! The 3D animation is beautiful and inventive, yet still feels old fashioned. Fans won’t be disappointed. Most refreshing is the movie’s positive Christian, redemptive, moral worldview as Charlie is rewarded for being compassionate, honest, selfless, and brave. The message is so on the nose and avoids nuance, that nearly every child will understand the movie’s message. In this way, it honors the original comic strip. There is some slapstick comedy and imaginative peril in some scenes in THE PEANUTS MOVIE.

(CCC, BBB, CapCap, V) Very strong Christian, redemptive, moral worldview (often implied but sometimes also didactic, but in a winsome way) about being compassionate, honest, selfless and brave, characters return anger with kindness and love, and make moral choices, even when it’s difficult, when all hope is lost, a character seems to pray while hoping for help, and multiple characters start their own small businesses; no foul language, one character uses the term “blockhead” and Charlie sometimes says “rats”; some minor slapstick violence and an imitated scenario where a character has a plane battle with the Red Barron, a famous “ace” fighter pilot during World War I; no sexual content, but boy has a crush on a girl; character literally jumps out of his clothes, but only his shirt comes off; no alcohol; no smoking or drugs; and, character asks, “Can a brother and sister get a divorce?”

THE PEANUTS MOVIE is a wonderful animated movie based on the beloved comic strip created by Charles M. Schulz. The movie’s release commemorates the 50th anniversary of the extremely Christian TV special A CHARLIE BROWN CHRISTMAS and the 65th anniversary of the comic strip. The whole gang is back together in this new iteration, including Charlie Brown, Snoopy, Lucy, Linus, Sally Brown, Peppermint Patty, Schroeder, Pigpen, Franklin, and even Marcie.

In the new story, the hero, Charlie Brown, as usual struggles being the average, klutzy child in the neighborhood. He’s accompanied by his trusty dog and friend, Snoopy, and Snoopy’s feathered friend, a yellow bird named Woodstock.

As the story opens, it’s a snow day, which means all the children will be sledding, skating and building snowmen instead of sitting in class. Charlie Brown, being the odd child out, decides to fly a kite, but as usual, he just makes a fool of himself in front of everyone. When a moving truck rolls into town, it seems that a new young person has joined the neighborhood. This fills Charlie with hope. This new young person won’t know how much of a failure he is, so maybe Charlie can have a fresh start and finally be a winner.

The next day at school, it’s revealed that the new young person is a little red haired girl. Charlie Brown instantly falls in love. Maybe he can win her over, but he’ll have to work up the confidence to even talk to her. What follows is a myriad of hilarious misfortunes, exciting adventures, and a touching, inspiring message about self-worth.

THE PEANUTS MOVIE is one of the best family movies in recent years! The 3D animation is beautiful, inventive, yet still old fashioned in feel. THE PEANUTS MOVIE successfully honors the traditions, values and style of Peanuts, while also opening it up to new audiences and generations to fall in love with the characters. Fans won’t be disappointed. Written by Charles Schulz’s son and grandson, the movie never loses its heart. It’s also very, very entertaining.

Most refreshing is the movie’s positive, biblical and Christian worldview. As Charlie attempts to find ways for people to like him, he learns that the most important thing is to continue being the compassionate, honest, selfless, and sometimes brave person he already is. The message is so on the nose and avoids nuance, that nearly every child will be able to understand the movies message. In this way, THE PEANUTS MOVIE honors the comic strip and the TV specials that have aired in the United States and more than 200 countries since the 1960s. Adults will be so charmed by the characters and animation, that all ages will find THE PEANUTS MOVIE delightful.

There’s only a light caution for very young children. In Snoopy’s imagination, he fights his nemesis, The Red Baron, for a dog-damsel in distress. Some of the plane battles he engages in could be frightening for some children, but it’s made clear that it’s just Snoopy’s imagination. Otherwise, the only objectionable content is some very light slapstick, and some children, like Charlie Brown’s nemesis, Lucy, are a little mean, but even she becomes nice at the end.

Rent or Buy THE PEANUTS MOVIE: