"Explorations in Mystery and Terror" 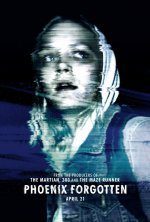 PHOENIX FORGOTTEN chronicles the disappearance of Josh, Mark and Ashely in the wake of unexplained UFO lights in the night sky of Phoenix, Arizona. Twenty years later, Sophie, Josh’s sister, returns to film a documentary with the goal of discovering what happened to Josh and his two friends. During her search for answers, Sophie discovers a missing tape filmed by her brother. Hopeful that the tape will reveal what happened, she must decide what to do with the recorded events he left behind.

PHOENIX FORGOTTEN captures the viewer’s imagination with mystery. It trades on the capital of the unknown. The filmmakers are careful not to reveal too much, building tension through possible explanations of the lights and people’s personal relationships to the disappearances and the three missing teenagers. The movie raises philosophical and theological questions that it all too happily leaves unanswered. The dominant worldview is morally positive, mitigated by some pagan references spoken by a few characters. Also, PHOENIX FORGOTTEN contains plenty of foul language, scary moments and brief underage drinking. So, MOVIEGUIDE® advises extreme caution, especially for younger viewers.

(B, C, AbAb, Pa, FRFR, LLL, V, S, A, DD, M) Light moral worldview about trying to find closure by searching for the truth behind the mysterious disappearance of three teenagers during a UFO sighting incident 20 years ago in Phoenix, kindness and courage are promoted, girl tries to find out what happened to her brother, one theme is about trying to overcome tragedy that upset happy families, and teenage girl has an encouraging spirit at school, but elsewhere things are ambiguous, and answers or solutions are not found, mixed with a reference to Ezekiel’s fiery chariot in the Bible, plus some Christian references, such as two characters met in church and Sunday School is mentioned, and someone says “Thank God,” but otherwise (though the existence of God may be a given), no attempt at prayer or worship is made, the reference to Sunday School has a light negative connotation and going to church seems to be seen more as an unwanted obligation than something people want to do, and some false pagan religion where it’s theorized that Ezekiel’s chariot could have been an alien spaceship, that aliens may have brought life to Earth and American Indian belief in the Star People are mentioned as an alternative explanation for the mysterious events and disappearance of the teenagers, but the solution to the disappearance to three teenagers remains a mystery; about 25 obscenities (including one possible but muffled “f” word) and four light profanities; minimal gore and violence, with most violence portrayed off screen after the act, some images of dead coyotes, scary noises and screaming are heard, final scenes of the disappearances contain some action violence; a sexual innuendo is made relating to sexual arousal; no nudity; references to beer drinking, including underage beer drinking; a reference to smoking taking place off screen, and a pilot searching for three missing teenagers surmises they may have had problems with drugs, but his suggestion is not borne out; and, lying, scary situations and talk about divorce.

Why is there terror and fear latent in the unknown? Why are so many scared of the unexplainable? These two questions are at the heart of PHOENIX FORGOTTEN. The story is a tale of disappearance, tragedy and fragility.

Set in the context of a real-life event, PHOENIX FORGOTTEN tells the story of Josh, Ashely and Mark, who vanish without a trace while investigating mysterious lights that appeared above the night sky of Phoenix Arizona in 1997. Sophie, Josh’s younger sister, returns 20 years later to Phoenix to make a documentary to uncover the truth behind her brother’s disappearance. During her process, she uncovers tapes recorded by her brother that document his original investigation into the mysterious lights. Not content with the answers she discovers, Sophie continues to dig uncovering the truth she set out to find.

PHOENIX FORGOTTEN is a straightforward, realistic found footage movie that plays on the unexplained to create tension and intrigue. The attempt to explain the unexplainable and keep events shrouded in mystery functions as a tight rope that the movie tries to walk.

Through Sophie’s documentary, all types of theories are introduced as explanations for the disappearances. One key theory comes straight from the Bible and can be found in Ezekiel. Another key theory is born out of the ancient American Indian belief in “star people.” The movie never settles on just one explanation, and in many ways fuses many different theories about UFOs and what happened in Phoenix into one story. The tension present in juxtaposing the explained with the unexplained creates a space to explore the terror of human frailty. The truth that Sophie presents in her documentary never fades far from the stories surface. The fact remains, that, with the mysterious disappearance of the three teenagers, lives were lost, families were broken, and no one knows why.

PHOENIX FORGOTTEN has a deeper fear awaiting any potential viewer: fear of the unseen world and of the divine. The movie’s references to Ezekiel’s wheel conjure questions concerning the nature of God and His involvement in the lives of human beings. The movie’s references to aliens point to the existence of things beyond what is known by humanity about the universe. All these possible solutions point to the greater question of why? Why did the teenagers suddenly disappear? What happened to them?

The true terror in PHOENIX FORGOTTEN is that there are no final answers to these questions. The world, indeed life, remains, at the core, a mystery. All human beings like Sophie can do in the face of such mystery is to seek the truth and follow the path wherever it may lead.

The movie’s quality is comparable to many of today’s best feature documentaries. Given the nature of a movie with alleged found footage, the composition of the images in PHOENIX FORGOTTEN is well done. Every element in the movie works in concert with the others to create a believable movie about the mysterious disappearance and possible demise of three teenagers. The movie contains little gore, though there are depictions of rotten animal corpses. Violence only comes in spurts, and then when it does, it does so very quickly and mostly off-screen.

PHOENIX FORGOTTEN has a solid moral worldview. Sophie is looking to find out the truth about her brother’s disappearance, which shattered her family’s happy life. Kindness, courage and encouraging others are extolled. Also, someone says “Thank God” at one point, two characters met at church, and a reference is made to the story of Ezekiel’s fiery chariot in the Bible.

The positive worldview is mitigated, however, by some questionable, mixed elements. First, PHOENIX FORGOTTEN has a significant amount of foul language. Also, at one point going to church seems to be seen more as an unwanted obligation than something people want to do. At another point, attending Sunday School is seen in a negative light.

Furthermore, although the movie avoids giving viewers final answers, it’s surmised that Ezekiel’s chariot may have just been an alien spaceship and that perhaps aliens brought life to Planet Earth, not God. Along with this, references are made to pagan Native American mythology about “Star People” visiting them.

The idea of the existence of alien life can be insidious. Sometimes, the belief of life elsewhere in the universe is associated with the idea that life on Earth began not as an act of the Divine, but through the means and technology of aliens. Of course, even if that were true, one may rightly ask, Who created the aliens? At some point, the existence of an Intelligent Divine Creator outside of time and space is rationally inescapable or unavoidable.