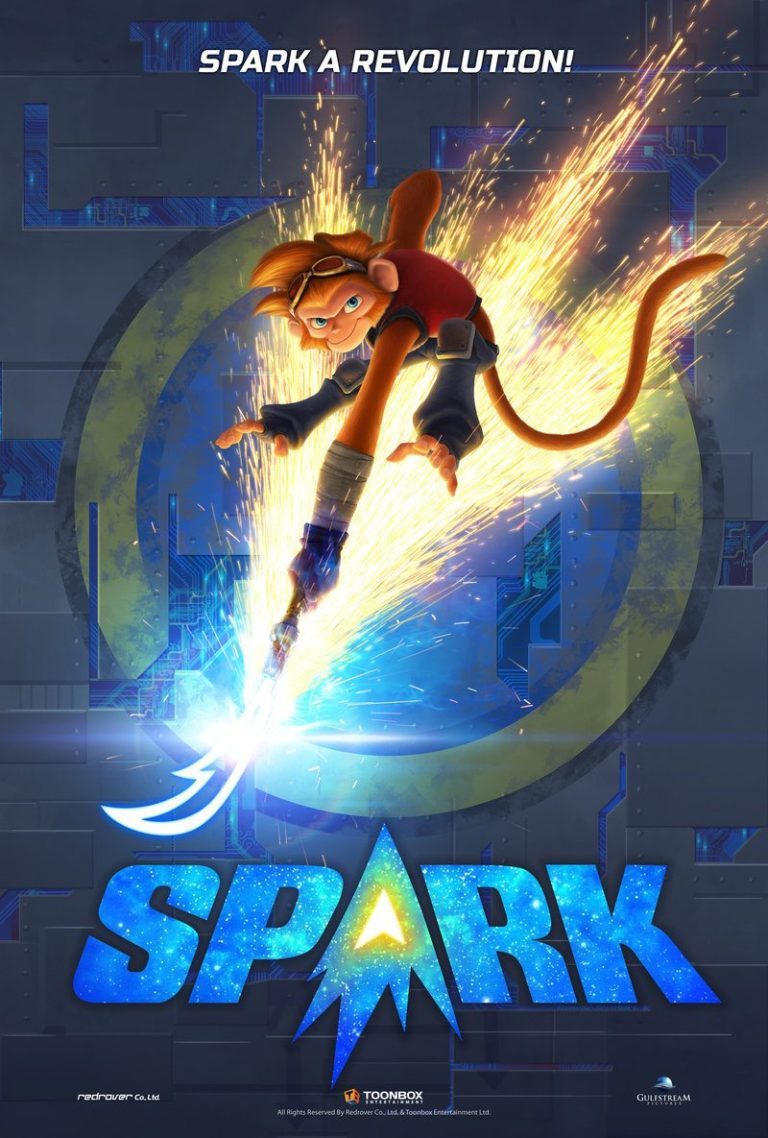 SPARK: A SPACE TAIL is an animated coming-of-age space fantasy about Spark, a teenage male monkey who doesn’t know he’s a prince. A female martial arts fox, a male warthog scientist prone to gluttony and a grandma-like primate robot are Spark’s only companions on an abandoned garage heap in space. The exiles live on the outskirts of the Planet Beta. Beta was taken over by the king’s evil brother, Emperor Zhong, 13 years ago when Spark was quite young. Zhong plans to use a weapon to threaten the universe by ripping apart more planets. It’s up to Spark, his friends and the Queen of Beta to save Beta and restore peace to the universe.

In a world of many popular princess movies, it’s refreshing to have a coming-of-age adventure story about a prince for a change. The animation, music and characters in SPARK: A SPACE TAIL are lively and memorable. However, despite some moral, redemptive elements, the movie has a strong pagan worldview with some abhorrent Eastern occult mysticism. So, media-wise families will find SPARK: A SPACE TAIL worthy of extreme caution.

(PaPaPa, OO, B, C, ACAC, VV, M) Very strong pagan worldview with some Eastern, occult mysticism, including reliance on meditation, references to fate and praying to a deceased person, mixed with some moral, redemptive elements of fighting a tyrannical villain and sacrifice for others; no foul language but two comments about kicking some “asteroid” that imply a light obscenity,” plus a passing reference to gas and manure; animated action violence depicts hand-to-hand martial arts style combat, battle scenes in space, a character dissolved in acid is implied, and lightning routinely shocks one character, but no blood; no sexual content; no nudity; no alcohol use; no smoking and/or drug use; and, main character steals a spaceship, mother lies to son via a robot, and narcissistic villain is short-tempered.

SPARK: A SPACE TAIL is an animated coming-of-age space fantasy about a teenage boy monkey named Spark, who must defeat an evil emperor, who destroys planets with a powerful weapon. SPARK: A SPACE TAIL has its stirring, exciting moments but is otherwise a bit shallow and contains a very strong pagan worldview with abhorrent Eastern mysticism.

Spark was born on the planet Beta, which was an idyllic place, ruled by a benevolent king and queen. When Spark was still very young, the king’s evil brother, Zhong, utilized a powerful weapon that literally ripped the planet in half. Among the remaining asteroids is one shaped like a shard. It also happens to be the garbage dump for the remaining part of the planet. Tucked away on the garbage shard is an underground bunker, which is where young Spark was raised by Vix, Chunk and a tottering grandma-like robot, Bananny.

During Spark’s martial arts training, Vix reminds him to focus while she disarms him and defeats all of his attempts to gain the upper hand. Chunk manages to develop equipment to help the little tribe’s efforts such as a holographic replicator. Some of the other inventions and scientific descriptions will be unintelligible to young children.

Meanwhile, the diminutive evil Emperor Zhong with a galaxy-sized ego worships himself by commissioning larger than life artwork of himself in addition to plotting the demise of additional planets. When the sculptor makes a mistake, Zhong calls in his personal Amazonian bodyguard, Koko, to toss the sculptor into something that looks like water, but it dissolves him and a poof of vapor is all that’s shown. The queen is summoned, but she’s completely different from Zhong. She is refined and dignified and horrified when she learns that Zhong possesses a device to help him find his weapon of mass destruction: the Kraken.

Restless for adventure, Spark looks for any chance to get off the shard. He intercepts a message intended for Vix and Chunk. Spark steals the only spaceship and follows the directions in the message, which leads him straight to the queen’s chambers. Surprised that Spark has come instead of Vix and Chunk, the Queen has no other choice but to give the Kraken Finder to Spark and charge him to get to Vix and Chunk as quickly as possible. She tells Spark this task is the most important job in the universe.

Spark manages to get back to the spaceship with a clever disguise provided by the Queen. However, Spark doesn’t go back to Vix and Chunk. In search of personal glory, he takes it upon himself to find the Kraken. Vix, unaware that Spark has stolen the ship and obtained the Kraken Finder, spends time in meditation. Meanwhile, Emperor Zhong discovers that the Kraken Finder has been stolen and sends Koko to retrieve it.

Spark, accompanied by his cockroach sidekick, finds the Kraken. Spark lures the Kraken, entranced with the sound of the spaceship’s horn, back to the shard. Upon their return, Spark discovers that the underground bunker has been ransacked and only the robot Bananny remains. Bananny informs Spark that Zhong has taken Vix and Chunk. When Spark returns to the surface, he looks into space and is dismayed to find that Zhong has taken the Kraken.

Zhong scares the Kraken, which causes the Kraken to squirt an ink that creates a worm hole in space. Spark, Vix and Chunk go through the vortex to an abandoned asteroid. Vix yells at Spark about making bad choices and they split up. Overgrown flying cockroaches imprison Vix and Chunk while Spark is discovered by other inhabitants living there. Spark discovers that the inhabitants are originally from Beta and meets the Captain of the Royal Guard. The Captain recognizes a mark on Spark’s hand. Spark has always thought it was a birthmark, but it’s a symbol of the royal family. Spark is a prince. The weight of that new information settles into Spark’s mind. The Captain takes Spark to see a large tree carved into the likeness of a large monkey and explains that it is a memorial of Spark’s father, the king, who gave his life to save his people.

The Captain gives Spark a moment alone. Spark talks to the tree as if talking to his father, looking for guidance. His father’s spirit appears in front of the tree and instructs Spark to go save his friends Vix and Chunk, who are trapped in a cave. The mark on Spark’s hand shines as a new martial arts style of weapon appears that’s magically connected to him by birthright.

Spark saves Vix and Chunk and returns to his people. They make a plan to re-create a vortex to get back to Beta and save their planet and the universe from Zhong.

Although SPARK is action-packed, includes a stirring musical score and has several memorable characters, there are several lengthy scientific explanations. At one point, Spark humorously cuts off Chunk when his scientific jargon gets too lengthy. There’s no foul language or obtuse toilet humor, but the phrase, “Let’s kick some asteroid,” is used twice. The type of violence depicted is martial arts style combat, space battles, lightning routinely shocks the Captain, a sculptor dissolved in acid (implied), and the queen punches the villain in the mouth to get rid of him. It’s clear from the dialogue that the Queen and Emperor Zhong aren’t a true couple and that the Queen was actually imprisoned in the palace.

SPARK: A SPACE TAIL contains no references to deity at all. Spark is instructed that, “Fate has brought you here for a reason,” and he’s encouraged to find his purpose in the universe. Spark prays to his deceased father for strength and then the spark mark on his hand glows and he is able to focus and defeat the enemy.

As God warns in Deuteronomy 18:10,11, “Let no one be found among you who sacrifices his son or daughter in the fire, who practices divination or sorcery, interprets omens, engages in witchcraft, or casts spells, or who is a medium or spiritist or who consults the dead.”