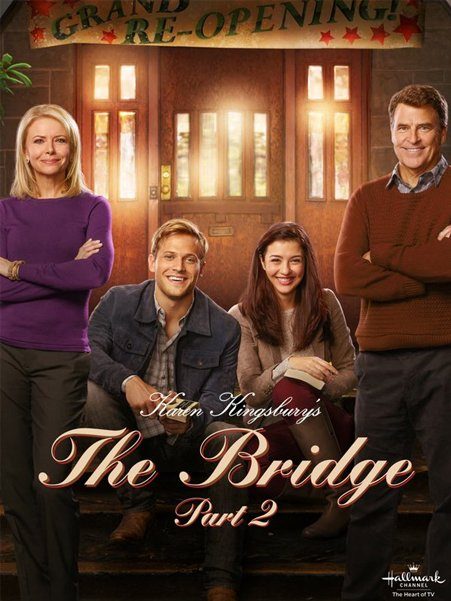 (CCC, BBB, V, A, M) Very strong Christian worldview with very strong moral elements includes a woman calls out to God for the first time to help her because her husband is sick, then a sign of a miracle happens, character makes a foundation to help fund those in need, and a father/daughter relationship is restored; no foul language; car accident where car gets totaled, and man is in a coma; no sexual content, light kissing; no nudity; light drinking; no smoking or drug content; and, one character seems to be emotionally blackmailing a person, but it’s resolved in a positive way.

THE BRIDGE PART 2 follows the story of a beloved bookstore in Tennessee that’s now in harm’s way after being wrecked by a storm. THE BRIDGE PART 2 has a strong Christian worldview and will touch viewers’ hearts.

THE BRIDGE PART 2 is a follow up to THE BRIDGE PART 1, which came out in 2015. THE BRIDGE 1 told the story of how a couple named Charlie and Donna started a bookstore, named the Bridge, after finding out they couldn’t have children. The couple thought a bookstore would bring people into their lives and forge a community, almost like a family. They were right. The bookstore quickly became a family atmosphere, and the entire town of Franklin, Tenn. love it.

One of the frequent customers is Ryan. During Ryan’s first year at Belmont College, he meets Molly. Ryan decides to take her to The Bridge to study 19th century literature together. Molly and Ryan fall in love with The Bridge and with each other, but there is confusion, and Molly is called back home to Seattle to run her father’s business.

Years later, in THE BRIDGE 2, Molly finds out The Bridge is under financial distress. There was a big storm, and all the books got destroyed, and the building left in shambles. On top of that, Charlie has gotten in a massive car accident that’s left him unconscious. Molly comes back to Nashville. When she goes to see Charlie in the hospital, she runs in to Ryan, who also comes to see Charlie. Ryan is thrown off to see Molly, but Molly pretends to be engaged. Donna tells the two the Bridge is in really bad shape and will most likely be closed. This news saddens Ryan and Molly, so they decide to try to help in whatever way they can.

Ryan and Molly end up spending a lot of time with each other, trying to rebuild The Bridge. Ryan has decided to stay in Nashville and not tour any more, wanting to be closer to his family. Molly is working for her father, but still wants to figure out her true desires and passions. The two confide in each other, while Donna waits by her husband’s hospital bed, praying he will wake up. Donna has never had faith, but feels calling out to God is necessary.

Will Charlie wake up and will The Bridge be saved?

THE BRIDGE PART 2 is a wonderful television movie for the whole family. The movie is entertaining and well written. THE BRIDGE PART 2 has a strong, somewhat evangelistic Christian worldview. One character finds faith in God after doubting. Another character restores her relationship with her father.

The title of this television movie is full of meaning. In rebuilding The Bridge, the characters also rebuild their bridges with God and with one another. Rebuilding your bridge to God is what happens when you accept Jesus Christ as your fully divine and fully human personal Savior and are baptized with the Holy Spirit.

Rent or Buy THE BRIDGE PART 2: