THE CHRONICLES OF NARNIA: PRINCE CASPIAN 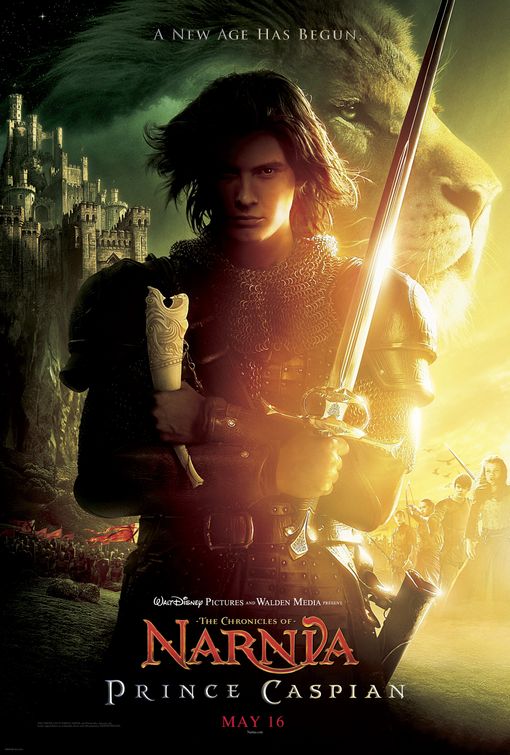 PRINCE CASPIAN is loosely based on the second book in THE CHRONICLES OF NARNIA, the great fantasy series by C. S. Lewis. Told in chronological order, the movie shows Prince Caspian escaping his evil Uncle Miraz, who killed Caspian’s father. Through two dwarves, Trumpkin and Nikabrik, Caspian meets the creatures of Narnia. In the process of his escape, he blows Susan’s horn, which calls the four Pevensie children, Peter, Susan, Edmund, and Lucy, back to Narnia from World War II London. The children find that Narnia has been conquered by the Telmarines, led by Miraz. While praying for Aslan, the Christ figure, to come to their aid, Prince Caspian and the children lead a ragtag army against the Telmarines.

PRINCE CASPIAN is an exciting, fantastic epic in the tradition of LORD OF THE RINGS. Despite some loose ends, it re-imagines the book’s story, which is about having faith in God through the Christ figure of Aslan. Ultimately it is God who determines the future of Narnia. MOVIEGUIDE® commends the filmmakers for being faithful to the book’s spiritually uplifting, redemptive themes. They turned a complex plot into an exciting adventure.

PRINCE CASPIAN is a very exciting, fantastic epic in the tradition of LORD OF THE RINGS. Right up front it needs to be noted that the book has been re-imagined to make the movie. In most cases, this re-imagining has helped the drama considerably. Better yet, the filmmakers have kept the integrity of and even highlighted the theological points C.S. Lewis was trying to make. One would hope that C.S. Lewis would be happy with the cinematic changes, although he was very critical of movies in general.

There are, however, a few minor divergences where media wisdom is required. So, don’t expect to see the book when you come to the movie. Expect to see a wonderful movie that retains the faith of the book.

The movie opens with Prince Caspian learning that his evil Uncle, Miraz, who killed his father to get power, has just had a son. Now that he has an heir, Uncle Miraz can kill Caspian. Caspian’s tutor, Dr. Cornelius, hastens Caspian out of the castle and tells him to ride for the woods because the human Telmarine soldiers are afraid of the Narnian creatures in the woods. This time, however, they pursue Caspian into the woods.

Caspian gets knocked off his horse into the hands of two dwarves, Trumpkin and Nikabrik. Through the dwarves, Prince Caspian meets the creatures of Narnia. In the process of his escape, he blows Susan’s horn, which calls the four Pevensie children, Peter, Susan, Edmund, and Lucy, back to Narnia from World War II London, and even calls Aslan.

The children find their Narnia castle in ruins. 1,300 years have past in Narnia time since they ruled in Narnia, although only one year has past in earth time. The evil Telmarines are destroying Narnia. It is up to Prince Caspian and the four kings and queens to take the small ragtag army of Narnian creatures and fight against the fascist armies of the Telmarines. They are hoping and praying for Aslan to come to their aid. Aslan, for those who don’t know, is the Christ figure, the son of the Emperor Beyond the Sea.

The message of the book is the message of the Book of Acts: How does one have faith in God, in the person of Jesus Christ, after His ascension. The book’s strong faith message remains in the movie, but it has been re-organized so that Lucy is the only one who sees Aslan until a critical point in the story, unlike the book where each one meets Aslan in his own faith walk. Some of this reorganization makes it appear as if the battles are within the province and capability of the Pevensies, Caspian and other Narnians, but ultimately, it is God who determines the course of the Narnian civilization.

C. S. Lewis believed as the Bible says that through Jesus Christ God is redeeming all Creation. He sees the creatures as being redeemed along with the people. The creatures have their faith battles too. The movie clearly rejects evil, in the person of the bad Miraz and in the appearance of the White Witch, who was defeated in the first movie. The movie contains a lot of sword fighting and action, which are reminiscent of the swashbuckling epics of the Golden Age of Hollywood.

The most problematic point is the fact that Susan and Lucy fight in the movie. C. S. Lewis believed that women should not fight, but the good news is that the filmmakers have chosen to be discreet about the women’s battle sequences. Even better news is that I had a long conversation with writer/director Andrew Adamson, and he decided not to use the wild party that Bacchus throws in the book. Andrew rightly believed that it was not appropriate to show children drinking wine at a raucous feast.

Despite some minor loose ends in the movie, the plot points are clear, the emotion is intense, the audience cheered and laughed at the right points, and even hard-hearted critics loved the movie. PRINCE CASPIAN should be a tremendous hit since 100 million copies of THE CHRONICLES OF NARNIA have been printed.

MOVIEGUIDE® commends the filmmakers for being faithful to the book’s themes. They turned a difficult plot into a terrific, exciting epic adventure.

Rent or Buy THE CHRONICLES OF NARNIA: PRINCE CASPIAN: