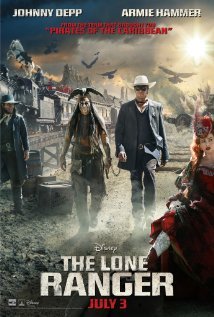 In THE LONE RANGER, an idealistic lawyer named John Reid goes West to visit his brother and establish a new law practice. His brother asks John to join a Texas Ranger posse chasing an outlaw gang, but they are ambushed, and John is left for dead. He’s rescued by an eccentric Native American, named Tonto. Tonto talks John into becoming a reluctant masked crusader known as The Lone Ranger to pursue the outlaws. They soon get more than they imagined. They learn that the bad guys are part of a much grander, more nefarious scheme.

THE LONE RANGER has state-of-the-art special effects, great photography, lighter moments, and trademark antics from Johnny Depp. Silver, the Lone Ranger’s white horse, almost steals the show. The music is also incredible. However, the storyline is very convoluted. Worse, the action violence is relentless and even brutal at times. The Lone Ranger doesn’t kill anyone himself, however. There’s also some politically correct content about evil white men, along with some pagan mysticism. In the process, this LONE RANGER is sure to disappoint many media-wise moviegoers.

(PaPa, PCPC, FRFR, ACapACap, APAP, B, CC, Ab, LL, VV, N, AA, D, M) Strong mixed pagan, revisionist, politically correct worldview, with allusions to “spirits” who have power to influence events, anti-capitalist elements, anti-patriotic elements and themes, some moral elements, some overt Christian elements where Christians pray and sing, a man says we are “under God,” woman asks main character to pray with her and main character says John Locke’s book is “his Bible,” and a moving prayer is said but by the villain, so the Christian elements are tinged with some irony; 19 light obscenities, four profanities, man urinating, defecation by a horse, man dragged through horse defecation, and man vomiting; extensive action violence where people are killed by guns, pierced by arrows, stabbed with swords and knives, and blown up in man made explosions, it’s implied a man cuts out heart of another man and eats it, and animals are cannibals; upper male nudity; alcohol use and drunkenness; smoking; and, greed, cheating, corruption, moral relativism.

Armie Hammer plays the Lone Ranger, a man fighting to maintain justice, with his Indian sidekick played by Johnny Deep, Tonto, in THE LONE RANGER. THE LONE RANGER has a convoluted plot line, mixed worldview, and should be viewed with extreme caution.

With the San Francisco Golden Gate Bridge under construction in the background, the year is 1933. A young boy dressed in a cowboy costume wearing a black mask is walking through the museum section of a traveling circus. He stops in front of an Old West period exhibit displaying a Native American in his native “habitat.” Suddenly, the wax-like mummified looking figure comes to life and turns out to be a very old Tonto (Johnny Depp) through whom the Lone Ranger story begins to be told from Tonto’s point of view.

At its inception, the plot follows fairly accurately the original epic melodrama where John Reid (Armie Hammer), an idealistic lawyer from the East, joins his brother Dan (James Badge Dale) in a posse to catch Butch Cavendish (William Fichtner), a very bad outlaw, and his gang. The posse gets caught up in a brutal ambush, Butch kills Dan and eats his heart, and Reid is left for dead. As he languishes under the hot dessert sun barely clinging to life, it may not take much longer before he suffers the same fate as his brother. Happily, Tonto finds him just in time to tend to his wounds and nurse him back to health only because the spirit horse Silver tells him to do so.

Once the extremely reluctant Lone Ranger to-be is recovered, the next question is where does the newfangled duo go from there? After some bickering, they temporarily unite their individual agendas and decide to go after Cavendish and the outlaws responsible for the ambush, and bring them to justice. As it turns out, Cavendish is only one part of a much greater evil enterprise with other bad guys in high places, such as Lathan Cole (Tom Wilkinson), a ruthless railroad tycoon joined by a thoroughly corrupt U.S. army officer in the person of Captain Jay Fuller (Barry Pepper). They are all conspiring and working double time to wreak havoc upon the land while rolling over anyone and everyone standing in their way. Throw into the mix the added tension created by false reports of Indian attacks on white settlers, and the Lone Ranger and Tonto find themselves in the middle of a much wider ranging conflict than they imagined.

Harking back to the popular radio show created in the 1930s, the Lone Ranger rapidly became a solid icon of American history on TV, delighting child and adult alike with a message of chivalry and the pursuit of justice in a rugged land where only the power of brute force determined the rules. To its detriment, this updated version doesn’t quite follow the same conventions as the original. There is not a clear distinction of good and bad, leading to a convoluted plot line and excessive violence. Even so, Johnny Depp adds an element of humor as a wacky, crazy character. The movie does have suspense and keeps audiences interested, and the music is incredible.

For those that have seen some of the original Lone Ranger episodes, or their movies, the more troubling differences are not only some of the excessive violence, but the overall spirit of THE LONE RANGER. Not only does the story become saddled with repeated politically correct elements of showing the evil white man who will stop at nothing in the name of progress to double cross, displace and kill the nice noble natives in order to achieve his greedy designs. Almost every character in the movie changes their positions and beliefs because of their greed or selfish desires. The Lone Ranger himself openly transitions from doing justice to “being an outlaw” out for revenge. This clearly leads to a morally relative standpoint and a convoluted plotline.

On the positive side, Silver, the Lone Ranger’s white horse, almost steals the show. The music is also incredible.

However, the storyline is very convoluted. Worse, the action violence is relentless and even brutal at times. The Lone Ranger doesn’t kill anyone himself, however. There’s also some politically correct content about evil white men, along with some pagan mysticism.

The extensive revisionist history may be due to the fact that the story is from the point of view of Tonto. The Native American dialogue even hints that Tonto is missing a gear. That said, the U.S. Army officer quickly abandons the truth when he is bribed. Other characters are just as susceptible to greed. Even the heroes succumb to the baser passions. The prostitutes are better than the townspeople. The church folk are weak. Worse, the great state of Texas is portrayed by the very different scenery of Arizona and Utah.

In a movie that already has some significant negative elements, including cannibalism, the overall result is a less than endorsable version of THE LONE RANGER that fails to live up to the original series. In the process, this LONE RANGER is surely to disappoint many media-wise moviegoers.