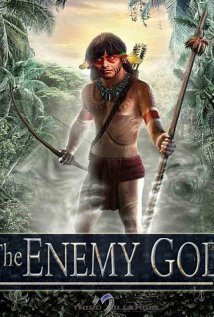 YAI WANONABÄLEWÄ: THE ENEMY GOD tells the true story of a Yanomamö shaman in the Amazon rainforest. The Yanomamö are called The Fierce People because they are involved in constant warfare. The Yanomamö have long memories remembering every infraction, each of which requires revenge. The shamans are deathly afraid of The Enemy God, who created everything. They are afraid of him because their spirits tell them that he hates them and he is opposed to their killing, lying, raping, cheating, and fighting.. The narrator is named Shake for his actions when he’s possessed by the spirits. A family of Christian missionaries comes to live in Shake’s village. They bring medicine and the Gospel. Eventually, Shake comes to Jesus Christ, but the adventure of his life is just beginning.

THE ENEMY GOD is a low budget but very well done movie. It cares deeply about authenticity and achieves that goal with set direction, battle scenes, and the portrayals of the Yanomamö people. Best of all, it tells how Jesus Christ brings health, peace and prosperity, even to simple, isolated people like the Yamomamö. The extreme violence requires strong caution.

(CCC, BBB, PC, VVV, S, NN, DD, M) Extremely Christian worldview refuting pagan spirits and gods and showing that Christianity brings peace and prosperity, with wonderful, valiant missionaries, plus some politically correct bureaucrats are exposed; no foul language; extreme violence with people shot with arrows, hacked by machetes, stabbed by spears, beaten with sticks, bloody murder, people impaled on pikes, and natives drink the bones of their enemies to see spirits; references to having sexual relations, including women being raped after warfare, but nothing salacious shown; lots of upper female nudity among a jungle dwelling tribe and native men and women in very flimsy g-strings; no alcohol use; natives taking drugs to see spirits of the rainforest; and, politically correct government officials.

Based on the same true events recounted in one of the most important anthropological books, THE SPIRIT OF THE RAINFOREST, that clearly shows how Christianity rescues people from self-destructive paganism, the movie THE ENEMY GOD tells the story of a Yanomamö shaman in the Amazon rainforest who comes to Christ in very dramatic terms. Although this is a true story, it is told with great power, and, therefore, is very fascinating. The movie cuts back and forth between the 1950s and the 1990s.

The Yanomamö are known as The Fierce People because they are involved in constant warfare. As the narrator, who is named Shake for his actions when he’s possessed by the spirits, says, the Yanomamö have long memories remembering every infraction by every other tribe and person, each of which requires revenge.

When they get home, they drink the ground-up bones of their relative killed in the recent battle. Shake is being trained by his cousin, Tangled-One, to become a witchdoctor-shaman. He spends days snorting hallucinogenic drugs in order to enter into relationships with the demonic spirits of the rainforest. Each shaman tries to get as many spirits to inhabit his chest as possible. The greatest act of the shaman is to kill an enemy child through the spirit world.

The shamans are deathly afraid of The Enemy God. He is the God that lives in the hole in the sky who created everything. They are afraid of him because their spirits tell them that he hates them and that he is opposed to their killing, lying, raping, cheating, and fighting.

A family of Christian missionaries comes to live in Shake’s village. They bring medicine and the Gospel.

Eventually, Shake comes to Jesus Christ and is delivered from the demons of the rainforest. His village follows suit, and they become the peaceful village known as Thriving Village. Now that they are not wasting time killing each other, they can actually grow crops and prosper.

In the 1990s, a woman on the verge of death comes from Sleeping Village. When she’s too sick to return, her husband says he will find another wife and leaves her there. She becomes a Christian and marries a man in Thriving Village who is kind and gentle. Her first husband returns and tries to take her back by force, and the missionaries call the Venezuelan officials.

The first official says she has rights as a Venezuelan citizen and does not have to return to the husband who beat and tortured her. The husband recruits his own Venezuelan officials, who Shake’s friend says have “lying eyes.” They say that the Venezuelan government has no control over the Yanomamö, that the Yanomamö should go back to their pagan ways, and that the Christian missionaries should leave them alone. These officials allow the husband to drag off his ex-wife. As a result, her cousin in Thriving Village calls everyone to go on the warpath against Sleeping Village. Shake tries to stop them. When he can’t, in a beautiful scene, he goes to church to pray that God will end the cycle of revenge.

THE ENEMY GOD is a low budget but very well made movie. It cares deeply about authenticity and achieves that goal with set direction, battle scenes, and the portrayals of the Yanomamö. At the end, when the pictures of the real people are shown, they look like the characters in the movie.

The script is powerful but slightly convoluted in places. Jumping back and forth in time is always difficult, but even with this flaw, THE ENEMY GOD is much better than most Hollywood movies. And, the point of Shake’s testimony is very clear.

Sinful man without Christ is frightening and abhorrent. Evil spirits control him. Jesus Christ brings health, peace, and prosperity, even to isolated people like the Yamomamö. This is one of the great stories. It is a highly recommended movie.

MOVIEGUIDE® urges every older teenager and up to watch this movie and understand why Jesus Christ is such a radical departure from what the modern occult movement is preaching as well as the pre-Christian pagan ways of man.