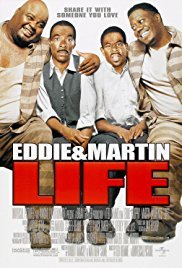 Eddie Murphy and Martin Lawrence star as Ray and Claude, two Odd Couple black men who land in a Missouri chain gang in the early 1930s and develop a bickering friendship over the course of next 50 years. The friendship is the most positive thing about LIFE, an entertaining comedy that also includes includes lots of foul language, some sexual and homosexual behavior, much arguing, and many irresponsible actions.

Romantic worldview of prison life where even those who have committed the worst crimes are basically good, with some pagan elements of seeking hedonistic pleasure & some minor moral elements; 181 obscenities with many "f" words & 10 strong profanities plus use of the "n" word in both derogatory fashion & friendly manner between black characters; minor violence such as racist sheriff murders black con man, two innocent men find bloody body, prison fight, plane explosion seen from distance, gunfight leaves one man dead, & arson set as part of escape plan; implied fornication off-screen, unmarried woman births baby after implied fornication off-screen & implied conjugal visits off-screen for prisoners; no nudity; alcohol use & abuse & bootlegging; smoking & cocaine use implied with minor character; politically correct elements regarding homosexual character as well as references to homosexual interests of some prison inmates & one homosexual pass made to one inmate; and, stealing, cheating, arguing, hedonism, lust, & not thinking about the consequences of one's actions.

After experimenting with more family-friendly material, comic actor and Hollywood star Eddie Murphy returns to rougher content in the new R-rated prison comedy, LIFE, from Universal. Basically, Murphy has dropped the jokes about body functions that were prevalent in THE NUTTY PROFESSOR and DR. DOLITTLE and replaced them with far more obscenities and slightly more sexual content. Even so, LIFE is one of Mr. Murphy’s better efforts in terms of entertainment.

In the movie, Murphy plays Ray, a slick con man and card sharp who owes money to Spanky Johnson, the owner of an illegal nightclub in Harlem, New York in the early 1930s. When Murphy steals the wallet of Claude Banks, a young black bank teller played by comic actor Martin Lawrence who’s visiting the club with his girlfriend, both men end up owing Spanky money. In order to pay off the debt, Ray offers to drive to Natchez, Missouri to pick up some really fine illegal booze made by an acquaintance of Ray. Claude and Ray drive to Missouri to pick up the booze, but in another illegal nightclub Ray loses all of the money (and his father’s pocket watch) that Spanky gave them for expenses. Claude meanwhile loses the $2 he had to a prostitute he solicits and takes upstairs off camera. Ray discovers that he was cheated at cards by another, older black con man named Hancock, played by Clarence Williams III, who played Linc on the old MOD SQUAD series on TV in the 1960s.

When Ray and Claude go searching for Hancock, they find him murdered in an alley. (In an earlier scene, the movie shows Hancock being knifed to death by the local racist sheriff, who was upset because Hancock has refused to leave town as he was told and becomes “uppity” when the sheriff confronts him.) Of course, Ray doesn’t find Spanky’s money or his father’s watch, and he and Claude are convicted of Hancock’s murder. The sentence by the judge: Life in prison at a rural prison camp and chain gang.

The rest of this movie tells how Ray and Claude barely survive in prison for 50 years. Harassed by the prison boss and his black lackey and rough inmates, the two men eventually find an equilibrium when Ray starts telling the other inmates about the nightclub he hopes to someday build. Entranced by Ray’s dreams of life outside the prison walls, the other inmates become friends with Ray and Claude, who themselves begin to build a solid friendship. That Odd Couple friendship is tested, however, by lots of bickering and by events that conspire to keep them in prison for a crime they really did not commit.

The friendship that grows between Ray and Claude is perhaps the most positive thing about LIFE. At times, they show compassion toward one another (and other people) through the healthy prism of that friendship. Much of this well-made movie, however, includes many strong obscenities and some strong profanities, nearly constant arguing and lots of irresponsible behavior, such as cheating, stealing and not thinking about the consequences of one’s actions. LIFE also contains some mild sexual content and the usual jokes about homosexual behavior among prison inmates. The homosexual content becomes politically correct at one point when Ray unsuccessfully tries to ease an openly homosexual character’s fears about not fitting in with society when the date for his release from prison comes near.

Most parents probably will not want their teenagers to see this R-rated movie. Adults concerned about the gratuitous foul language, immorality and homosexual activism of today’s movies also will want to take a pass on LIFE.