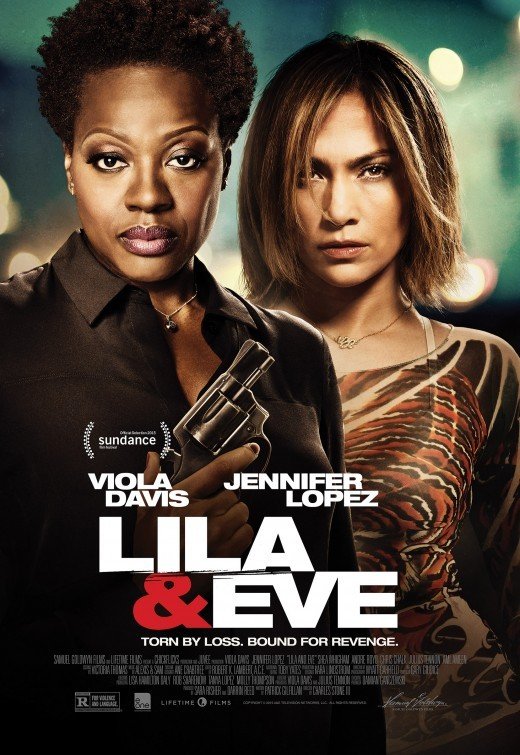 In LILA & EVE, Lila’s 18-year-old son is accidentally killed in a brutal drive-by shooting initiated by drug dealers. Lila joins a support group for mothers whose children have been murdered. There she meets Eve, and the two women quickly grow cynical that justice will be served when they realize the police aren’t dedicated to solving their cases. Eve convinces Lila to take the law into her own hands. They become amateur detectives and set out to find the drug dealers involved in their children’s deaths. Desperate for revenge, they hunt down the killers. LILA & EVE starts out promising, but becomes ridiculous and incoherent. The movie also has major moral problems. Justice is confused with revenge. The victims turn into murderers themselves and are allowed to get away with killing multiple people. In addition, the story has weak points such as the major plot twist at the end, which makes no sense. The character developments come across as unrealistic. Ultimately, LILA & EVE is an unacceptable movie, with excessive foul language, graphic shootings, illegal drug transactions, and other major moral problems.

(PaPa, AbAb, C, B, LLL, VVV, N, A, DD, MMM) Very strong immoral, pagan worldview where Christianity and moral values are brushed aside in favor of vengeance and justice is confused with revenge, with biblical morals are ignored out of grief and anger, though movie begins with main character praying, God’s will is mentioned, grief support group discusses biblical encouragement and closes meetings with prayer, mother turns to God for healing her grief, some characters wear cross jewelry, and God raising his Son from the dead is mentioned, but all that is eventually rejected; at least 51 obscenities and profanities; teenager is shot in drive-by and falls in a pool of his own blood, dying teenager shown being treated in the emergency room after being shot, woman shoots multiple drug dealers throughout movie, teenager jumps off roof of parking garage to escape being shot and dies, mother slaps her son’s cheek, man shoots a woman and injures her, man shoots his pregnant wife by accident, but she doesn’t die, woman fires a gun at a drug dealer’s house as a warning, woman has a car accident and injures herself and her son, woman rigs her house to blow up and kills several drug dealers inside, woman is blown backwards with the force of her house blowing up and sustains facial burns; no sex; natural upper male nudity in hospital emergency room; alcohol use; cigarette smoking, multiple scenes showing the selling of drugs, whole movie features characters who are drug dealers, woman takes pills to numb her grief over her son’s murder; and, two mothers talk about having their children out of wedlock, two women attend the funeral of teenagers they killed and lie about who they are, mother finds an illegal gun in her son’s backpack, mother uses illegal gun to kill people, woman hides illegal gun in her home from police, woman lies to police about committing murder, women in support group lie to police to cover up woman’s crimes, woman lies to her boyfriend, woman decides to take the law into her own hands and gets away with multiple murders, revenge is redefined as justice.

LILA & EVE is a thriller about two grieving mothers seeking revenge against the drug dealers who killed their children. LILA & EVE starts out promising but becomes ridiculous and incoherent. A drive-by shooting has just occurred outside the neighborhood corner market, a place where drug dealers frequent. The latest victim of gun violence is Stephon, Lila’s son, who just celebrated his 18th birthday. To cope with her grief, Lila joins a support group for mothers whose children have been murdered. There she finds biblically centered help. They even pray at the end of each meeting and turn to the Bible for encouragement. Though she sports plenty of Christian jewelry and participates in the prayers, Lila finds no comfort in them. She also feels the other mothers don’t completely empathize with her. Deep down she has a buried rage against her son’s killer…if only she knew who that was. After a month of investigation, the police stonewall Lila, who comes to realize that they’re just going through the procedural motions instead of working diligently to solve Stephon’s murder. The detectives on the case confirm as much in their private conversations. After all, this is the ghetto and shootings happen all the time. The message is clear: the only people who care about justice and keeping peace in the community are the people who live there. The police can’t be trusted to do the right thing. Lila finds a grief partner in fellow support group attendee, Eve, who lost her young daughter. Eve is as cynical as Lila, and the two find a great deal in common. A former interior decorator, Eve offers to help Lila redecorate her home as a catharsis. One afternoon, Lila finds a gun in youngest son, Justin’s, backpack and is horrified that he might use it. She confiscates it, warning him about the dangers associated with having a gun. While Lila is all talk, Eve is about action. She soon convinces Lila to take the law into her own hands. They become amateur detectives, now armed with Justin’s gun, and set out to seek revenge on the drug dealers involved in the their children’s death. LILA & EVE starts out promising enough. There is prayer, talk about God, and a caring support group to help mothers get through their grieving process. Things get fishy when Eve shows up almost out-of-the-blue and starts criticizing the encouraging words of the group members. Right away something is “off” with the character of Eve, which becomes evident as the movie starts to go downhill one unbelievable scene at a time. Somehow, these two normal mothers start to out-detect the professional detectives and systematically hunt down the drug dealers linked to Stephon’s case. To make matters worse, the pair turn into hypocritical killers themselves and murder each person they find. A grieving mother wanting revenge for her son’s death is realistic. A grieving mother who turns into a serial dealer killer is a ridiculous stretch that’s too far to make for these characters. The most astonishing thing about this movie is that morality is completely disregarded in the end. After the shock of the “mother next door,” Lila, turning into a coldhearted killer, she’s allowed to get off without any accountability. Granted, the bad guys pay for their evil deeds with their lives, but it is overshadowed by the good guy turning out to be just as evil. An “eye for an eye” seems be the filmmakers’ definition of justice, with absolutely no regard for law. The police are portrayed as incompetent jerks, but the rest is an incoherent message. For example, in one scene, Lila lectures about gun violence and drugs, and in the next, she’s using an illegal gun to kill someone. There is a tiny half-hearted attempt to lay some of the blame for a lawless community on the lack of proper family values and parenting. Sadly, the broken relationship between police and the inner cities of America is only fueled by reckless propaganda such as this. LILA & EVE is definitely not a movie for children, with more than 50 profanities and obscenities, graphic shootings, illegal drug transactions, and major moral problems.