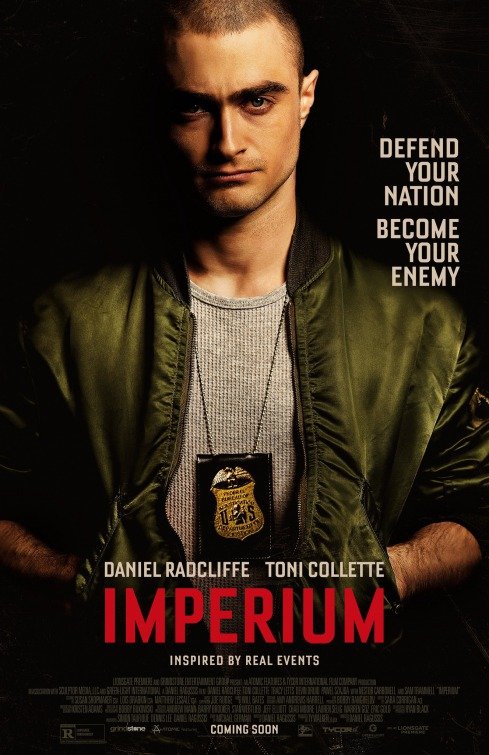 In IMPERIUM, Nate Foster is a brilliant, young FBI analyst. Though he seems intellectually superior to many fellow agents, his youth and inexperience don’t inspire anyone to assign him to important roles. However, one agent, Angela Zamparo, recognizes his potential. She asks him to go undercover in the world of white supremacy because she thinks a terrorist plot is brewing. Shedding his nerd-like persona, Nate gives himself a crash course in white supremacy and the Neo-Nazi movement. Nate fails to make a terrorist case against them until he’s tipped off about a large-scale attack being planned.

IMPERIUM has a good plot structure, with some clever, suspenseful scenes. However, the movie’s real brilliance shines in Daniel Radcliffe’s performance as Nate Foster. He makes it easy to forget his HARRY POTTER persona. Sadly, though, IMPERIUM contains abundant foul language. Also, though it presents a good warning regarding the evils of the white supremacy movement, it conflates that movement with conservative beliefs about the Bible, pro-life groups and Christians who are concerned about the radical homosexual movement. This false, politically correct propaganda makes IMPERIUM unacceptable.

(B, AbAb, PCPC, LLL, VV, AA, D, MM) Overall light moral worldview where racist criminals are brought to justice, and their racism is condemned, but the Bible is quoted in one scene to falsely justify racist attitudes, and there’s extreme Anti-Semitic sentiment and racist rhetoric against people of color, and, though the Anti-Semitism and racism are rebuked, the movie conflates Christian, conservative and even pro-life groups and ideas with the white supremacist movement in a false, politically correct, liberal way that’s propagandistic; at least 112 obscenities and profanities, a woman is called the “b” word, and a black man is called the “n” word; strong violence includes a Muslim terrorist tries to set off a bomb but is thwarted by the FBI, pictures of people injured by a dirty bomb are shown in one scene, a group of protestors fight with a group of white supremacists as they march in the street, a man crashes his truck into several other cars trying to get away from an angry mob, some men suffer bloody injuries during a fight, a skinhead intimidates and threatens to kill an interracial couple, a man breaks a store window, a terrorist group makes bombs in a garage and tries to draw guns on the FBI before being caught, neo-Nazi groups are shown carrying weapons and doing weapons training; no sexual content; no nudity; several scenes depict casual alcohol drinking, one scene shows a group of men drunk in a club; several scenes depict cigarette smoking; and, many scenes depict racist attitudes toward people of color, but racism’s implicitly or explicitly rebuked.

IMPERIUM stars Daniel Radcliffe as a young FBI agent who goes undercover in a white supremacist group to expose a terrorist plot. Although the story is well produced and Radcliffe delivers a convincing performance, the movie contains abundant foul language. IMPERIUM also advocates for diversity to the point of inserting some false, politically correct liberal propaganda against conservatism, which has nothing to do with white supremacist groups like the ones depicted here.

IMPERIUM begins on the streets of Washington D.C. as a radical Islamic terrorist group is getting ready to set off bombs that had been strategically placed. Only when a new recruit, a refugee from Africa, is about to push the button, does the movie reveal he’s actually been working with undercover FBI agents the whole time, and the bombs are all duds. They take him in for questioning, but he’s uncooperative. Nate Foster, the youngest and least experienced agent of the bunch, is able to win over the refugee by speaking his native language and sympathizing with his story of coming to America.

With one less terrorist off the streets, the FBI turns its attention to a recent string of shipments coming into the U.S., containing rare explosive materials. Everyone prefers to zero in on possible Islamic terrorist cells that might be planning to use these materials to make devastating bombs, but one agent, Angela Zamparo, is quick to point out that a far bigger threat is living among them. She cites statistics claiming that white supremacist groups commit more acts of terror than Muslims, and they are the ones the FBI should really be watching more closely.

Angela is reluctantly given permission to pursue her theory. She surprises Nate by asking him if he wants to work with her on the case. Accustomed to being in the back of the line, so to speak, Nate is flattered to be offered such an important assignment. However, he falters when she reveals she wants him to go undercover into the world of white supremacy. The diminutive, nerdy Nate hardly thinks he’s the right guy to be put in such a dangerous situation. If he were to be caught, it’s doubtful he’d make it out alive.

However, Angela sees Nate’s strength to be his ability to outmaneuver the most clever of enemies with his intelligence. So, eager to prove himself as a worthy FBI agent, Nate hesitantly agrees and begins to transform into a skinhead. He’s given a new identity, a new place to live, a new truck, and invents a military past for himself that stresses a white supremacist way of thinking. In his spare time, he pours through a library of books on Nazism and fascism, and familiarizes himself with the leaders of the national movement.

A skinhead who secretly works with the FBI introduces Nate to the radical group. They are suspicious of him at first, particularly because he’s wearing Levi jeans made by Jews, but he’s able to use the rhetoric he studied to win them over. The group’s leader takes them under his wing immediately, supplanting the position of the less intelligent members. It’s not long before Nate is introduced to the wealthy side of white supremacy, a businessman named Gerry Conway.

Nate befriends Gerry by impressing him with their mutual love of classical music and philosophy. Gerry isn’t into the lower form of intimidation like the skinheads, but he doesn’t hesitate to serve swastika branded cupcakes at his parties.

As time passes, Nate becomes more aggressive in trying to uncover any possible terrorist plot, nearly compromising his true identity on several occasions. However, he’s unable to come up with a concrete case. The FBI shuts down the investigation, but when Nate unexpectedly learns about a large-scale attack being planned by the last person he would suspect, they realize much more is at stake than they ever realized.

IMPERIUM has a good plot structure. The movie’s suspense comes not from the actions of the radical groups, but from the multiple points in the story where Nate’s cover is nearly blown. His clever escapes are inspired by a real-life agent, Mike German, who spent decades going undercover in the white supremacist world. That said, the movie’s real brilliance shines in Daniel Radcliffe’s performance as Nate Foster. Radcliffe makes it easy to forget his HARRY POTTER persona. He delivers a convincing role, one that probably would win over the trust of the radical groups he was only pretending to infiltrate. Not only must the British actor come across as a skinhead, but an American skinhead as well, accent and all.

There is an odd turn a little more than halfway through the movie, however, when the skinhead gang Nate joined suddenly disappears for no reason. They do reappear briefly in a later scene, but the filmmakers don’t resolve that whole storyline in an organic, natural way.

The biggest disappointment regarding IMPERIOUM, though, is in the movie’s overtly liberal preaching, which comes across as Anti-West, anti-conservative and even anti-white. While the problems of white supremacy, racism and Neo-Nazi movements certainly exist and should be addressed, IMPERIUM takes its message of tolerance and diversity beyond what’s necessary, to the point of propaganda. At one point, the Bible, pro-life groups and Christian concerns about the radical homosexual movement are all suggested to be part of this fascist movement, which opposes anything that hasn’t descended from America’s European, white founders. This false, politically correct liberal propaganda makes IMPERIUM unacceptable.

Of course, Europe’s Christian civilization is based on a religion founded by Jews and spread partly by people of color, including such renowned Christians as Tertullian and St. Augustine. Also, there’s no evidence that white supremacists have killed more people than Muslim terrorists, though there was a 2005 study going back to 1980 that found most alleged terror acts in the USA were committed by Latino groups. That study contends white supremacy and Islamic terrorism are roughly equivalent, but it conveniently leaves out the nearly 3,000 people killed in the United States by Muslim terrorists on 9/11, not to mention al-Qaeda’s bombings of several U.S. embassies in Africa. Also, since 2005, there have been multiple terrorist attacks by Muslims in the United States and Europe, especially France. So, while the danger of white supremacist groups in America is real, the movie’s story is based on a lie. This also damages the movie’s credibility.

The white supremacists depicted in IMPERIUM make many Anti-Semitic slurs. They also attack people of color both physically and verbally. So, the wickedness of groups supporting such activities is fully displayed. However, morality wins the day. The terrorists are all held accountable, and racism is condemned. That said, practically every scene contains foul language, and there is a moderate amount of violence. So, MOVIEGUIDE® advises extreme caution for IMPERIUM.