"Amiable Comedy Celebrates Christmas on the Side" 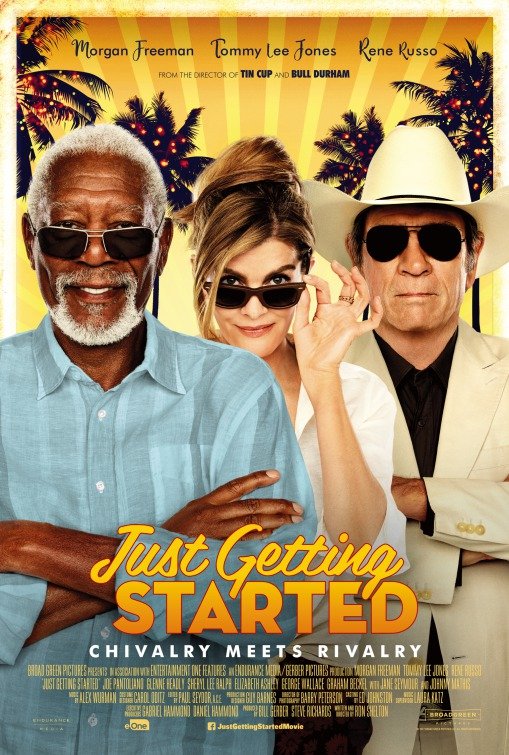 It’s a joy to watch Morgan Freeman and Tommy Lee Jones try to outdo one another in JUST GETTING STARTED. Writer/Director Ron Shelton provides a sure-handed professional touch. Even better, he inserts some positive references to Christmas in the movie, including some Christmas carols with religious lyrics about Jesus. That said, the movie could be a little bit funnier and exciting. JUST GETTING STARTED also has plenty of PG-13 foul language and some innuendo. So, MOVIEGUIDE® advises strong caution for adults and extreme caution for teenagers, especially younger teenagers.

Dominant Worldview and Other Worldview Content/Elements:
Light Christian, moral worldview celebrates living a full life during your golden years and contains some positive Christmas carols and songs, including the two male leads sing a good portion of “Hark the Herald Angels Sing,” plus there are some other Christmas carols that refer to Jesus, Christmas and Christianity, such as “Silent Night” and “Good King Wenceslas,” along with Christmas songs like “Winter Wonderland” sung by Johnny Mathis, plus someone says, “Only God is perfect,” mitigated by some antinomian hedonistic behavior on the part of one of the two male leads and the ladies he pursues.
Foul Language:
About 44 obscenities (including one “f” word and some “s” words along with “h” and “d” words), one GD and one possible Jesus profanity which sounded muffled so it was hard to hear or tell if it actually occurs, and nine light exclamatory profanities.
Violence:
Light violence with a comical tone includes woman asks someone to kill another person but make it look like an accident, a couple fighting scenes, in one fight scene a Christmas tree is knocked down, man finds a rattlesnake in his bag, people try to deal with the rattlesnake, rattlesnake is put in a bucket, and a man is asked to sit on the bucket’s lid to make sure the snake doesn’t escape, a small bomb explodes a golf cart, two vehicles chase one another down a dirt road, man kidnaps woman, gun shot out of criminal’s hand and he’s wounded with another gunshot, and a coyote tries to take away a small dog, but man shoots the coyote and frees the dog.
Sex:
No depicted sex scenes, but it’s implied retired manager of a resort for retired folks sleeps around with some of the older ladies, the ladies are referred to as the man’s harem by one of his buddies, manager has arranged a rendezvous with one lady, but another lady shows up in his bed, and later she shows up in his tub in a bubble bath, but it’s the man’s poker night so he leaves both women, manager’s rival falls in love with a new woman to the resort (it’s implied that the rival isn’t interested in philandering), plus a side character tells a light dirty joke.
Nudity:
No explicit nudity but woman in a bed is wearing a nightgown and later appears in a bubble bath with a bare leg.
Alcohol Use:
Alcohol use and drunkenness.
Smoking and/or Drug Use and Abuse:
No smoking or drugs.
Miscellaneous Immorality:
Man cheats at golf, two men start a rivalry, but they end up friends, mobster’s son kidnaps a woman, but the jeopardy is relatively light, and some jokes about the incongruities of celebrating Christmas in the warm desert resort town of Palm Springs, Calif., but the jokes are not malicious (for example, some Christmas carolers are dressed in typical Victorian dress but they’re wearing flip-flops as they entertain people enjoying a resort’s pool area).

JUST GETTING STARTED is a breezy, entertaining comedy about two testy, outgoing retired men, who vie for a woman’s affection during Christmas time in a game of one-upmanship at a resort for retired folks, where one of the men is secretly under federal witness protection. It’s fun to watch Morgan Freeman and Tommy Lee Jones go at it in JUST GETTING STARTED under the professional direction of Ron Shelton, but the movie contains plenty of PG-13 foul language and some occasional lewd behavior along with its male heroics and positive, overt Christmas references to the Birth of Jesus, King of Kings.

The movie opens with a mobster’s wife calling someone to kill Morgan Freeman’s character, Duke Diver, who she sees in an ad for a Palm Springs desert resort for retirees called Villa Capri. Serving as a federal witness, Duke apparently put her husband in jail, so the wife wants revenge.

Meanwhile, at Villa Capri, Duke is the Big Kahuna. Not only does he manage the resort and its activities for the retirees, he’s also having affairs with at least three of the resort’s most desirable single females among the retirees. Into Duke’s world steps Leo, a rich entrepreneur and ex-military man played by Tommy Lee Jones. Leo immediately irks Duke when he takes Duke’s parking spot with his big, shiny red truck. Then, at Duke’s weekly poker game with his male friends, Leo wins Duke’s $5,000 stake. Also, Leo seems smitten with a pretty new female arrival named Suzie, played by Rene Russo. So, Duke decides to try to steal her away from Duke’s romantic advances.

The game is now on. However, things take a turn when Duke survives two attempts on his life. Duke also learns that Suzie actually was sent by the company that owns Villa Capri to find a good reason to fire Duke.

It’s a joy to watch Morgan Freeman and Tommy Lee Jones try to outdo one another in JUST GETTING STARTED. With Rene Russo as the focus of their attention, the movie has assembled a nearly perfect combination. In one sequence, Duke challenges Leo to a golf contest, where Duke shows off for the ladies watching by playing one handed. In another sequence, they try to best one another in the game room by playing five different games, including chess, ping pong and limbo(!). Director Ron Shelton (BULL DURHAM, WHITE MEN CAN’T JUMP and TIN CUP) provides a sure professional hand on these proceedings in a way that reminds one of Clint Eastwood’s director abilities. He also inserts a lot of Christmas songs and carols into the story that sometimes point to Jesus. At one point, Leo and Duke joyously sing a good portion of “Hark the Herald Angels Sing” with a tow truck driver. In another scene, Morgan Freeman starts to sing “Silent Night” before the camera cuts away from him. Shelton also shows his two male leads working together to defeat the assassin sent to kill Duke. Another major positive message in the movie is the idea that your life doesn’t have to stop when you reach your golden years.

All that said, JUST GETTING STARTED could be funnier and a little more exciting. Also, in the middle of the movie, Shelton and his team forget about the plot involving the assassin. JUST GETTING STARTED also contains plenty of PG-13 foul language, plus a GD and one “f” word. It’s also clear in the beginning that Duke is sleeping with at least two of the three ladies who are part of what Duke’s friends describe as his “harem.” Finally, there are a couple lewd comical references. Counteracting this content is Leo’s character, who’s really only interested in one lady, the newly arrived Suzie, who reminds him of his late wife.

Thus, MOVIEGUIDE® is pleased with JUST GETTING STARTED’s fun, uplifting celebration of Christmas, including its overt insertion of reverential Christmas carols with strong references to the salvation that the birth of Jesus Chris brings. The foul language and innuendo in JUST GETTING STARTED warrant strong caution for adults, however, and extreme caution for teenagers, especially younger teenagers.