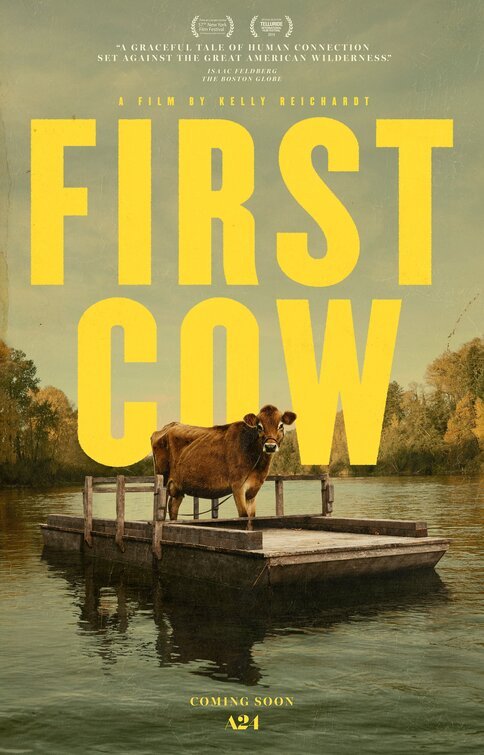 FIRST COW is a slow-moving drama set in the Oregon Territory around 1820. While working with some fur trappers, a cook nicknamed Cookie befriends King-Lu, a Chinese sailor on the run from some Russians. Cookie and Lu meet again at the local trading post’s watering hole. They become fast friends and roommates at an abandoned ramshackle cabin Lu has found. One day, Lu convinces Cookie to steal milk from the outpost’s only cow to make and sell sweet biscuits to the outpost’s hungry denizens. The only problem is, the cow is owned by the outpost’s bigwig, a rich, pompous Englishman.

FIRST COW recreates its time period well, and the acting is good, though not particularly stirring. FIRST COW moves much too slowly. Also, the script doesn’t take full advantage of the story’s obvious comical aspects. Finally, the movie has a gloomy humanist worldview and an abrupt ending that doesn’t resolve the story. Cookie warns Lu they’re playing a dangerous game, but Lu keeps making self-righteous, selfish arguments for cheating and stealing. All these problems in FIRST COW will turn off most moviegoers.

(HH, B, AP, Acap, L, V, A, D, MM):
Dominant Worldview and Other Worldview Content/Elements:
Strong humanist worldview where one man has a pessimistic, selfish view of life and entices another man to steal from a third man, and the movie ends abruptly and seems to confirm the one man’s bleak, humanist and apparently godless view of life, plus there are some moral elements about friendship and being loyal to a close friend, but there’s a light Anti-American, anti-capitalist tone to the story that adds to the movie’s humanist worldview and the one man’s pessimistic, selfish view of life
Foul Language:
Three or four obscenities, one GD profanity and one light profanity
Violence:
Woman finds two human skeletons buried near the top of the ground near a river, two thieves have to run from men trying to kill them, and one man falls down a hill and gets a concussion, which leaves him groggy and dizzy after he finally wakes up after resting from his injury for a day or two
Sex:
No sex
Nudity:
No nudity
Alcohol Use:
Brief alcohol use
Smoking and/or Drug Use and Abuse:
Brief smoking but no drugs; and,
Miscellaneous Immorality:
Two men in a wilderness territory two hundred years ago steal milk from another man’s cow, the only cow in the area, for their own benefit and profit.

Set in the Oregon Territory around 1820, FIRST COW tells the story of two men, an American cook and a Chinese sailor, who create a successful business on the frontier by stealing milk from the territory’s first cow owned by the local bigwig and making sweet biscuits out of the silky substance. FIRST COW recreates its time period well, and the acting is good, but the movie moves much too slowly, doesn’t take advantage of the story’s obvious comical aspects, and has a gloomy humanist worldview and an abrupt, kind of depressing ending that leaves the fate of its characters dangling.

FIRST COW opens in present-day Oregon. A teenage girl walking her dog by a river comes upon two human skeletons lying close to the top of the ground when her dog sniffs the wet dirt.

The movie cuts suddenly to 1820s Oregon. While working with a group of fur trappers, a cook nicknamed Cookie befriends a Chinese sailor who’s on the run from some Russians. Named King-Lu, the sailor says he got into a fight with one of the Russians and killed him in self-defense. Cookie helps clothe and hide King-Lu after he finds the man hiding naked in the forest while Cookie forages from herbs for dinner. Cookie doesn’t get along with the trappers, because they expect Cookie to hunt for the meat he’s supposed to cook for them, and Cookie is a terrible hunter!

After helping King-Lu escape his Russian captors in the forest, Cookie runs into the man again at the local watering hole near the fort overlooking the Royal West Pacific Trading Post, a muddy, bustling outpost filled with American and foreign dreamers looking to make their fortunes trapping or finding gold. The outpost’s occupants also include some peaceful American Indians.

Cookie and King-Lu become fast friends. Cookie only has a tent, so the two men become roommates in King-Lu’s ramshackle cabin. Cookie becomes like Fastidious Felix to King-Lu’s Slovenly Oscar in an Early American version of Neil Simon’s ODD COUPLE. He starts tidying up the cabin right away and cooks for them both. Meanwhile, the trading post’s bigwig, a rich, pompous Englishman called Chief Factor, brings the outpost’s first cow (the bull died on the way there) and leaves her tied to a tree near his house at night.

One day, Cookie remarks to King-Lu that he could make better biscuits for them if he had some milk rather than just water. Despite Cookie’s warning that they could get into big trouble, King-Lu convinces Cookie that he could steal some milk from Chief Factor’s cow at night while King-Lu provides the lookout.

The next morning, the resulting biscuits are absolutely delicious. King-Lu tells Cookie that they could make some good money by stealing more milk every night and selling biscuits at the outpost each morning. Lu has no moral qualms about stealing the milk from Chief Factor. Lowly men have to take advantage of every opportunity that comes their way, he argues. Despite his misgivings, Cookie agrees. He even decides they can sell even more biscuits if he applies some honey to them.

Sure enough, the outpost’s trappers and prospectors love Cookie’s biscuits. One day, however, Chief Factor comes to taste the biscuits. He thinks they’re so good that they remind him of the little biscuits and cakes sold in London.

After Chief Factor’s visit, Cookie tells Lu that they should take their money and head to San Francisco to seek their fortune there before they get caught. However, Lu argues that a rich man like Chief Factor doesn’t have enough imagination to think that someone would dare to steal from him.

Sure enough, Chief Factor isn’t at all suspicious about Cookie’s secret ingredient for the biscuits, milk from Chief Factor’s precious cow! However, when Chief Factor comes to Cookie and asks him if he can make a special cake for an important guest coming to visit Factor and his wife, the stakes are raised. Will Cookie and Lu still be able to pull the wool over Chief Factor’s eyes?

FIRST COW recreates its time period well, and the acting is pretty good, though not particularly stirring. However, the movie moves much too slowly. Also, the script doesn’t take full advantage of the story’s obvious comical aspects. For example, the comedy doesn’t really start to kick in until the trappers and prospectors start lining up each morning to get a taste of Cookie’s biscuits. The fact that the movie’s music (what little there is of it) sounds rather somber throughout the movie’s running time doesn’t help. Thus, the movie’s writer/director inexplicably seems to deliberately undercut her story’s clearly comical nature.

Her movie’s biggest problem, however, is its gloomy humanist worldview and its abrupt ending that leaves its characters dangling. Although the lead characters don’t get away with their theft of the cow’s milk, the Chinese character, King-Lu, frequently expresses his humanist worldview that life is tough and lowly people like he and Cookie must take advantage of every opportunity crossing their paths, even if that means cheating and stealing. Cookie warns Lu at least two times that what they’re doing is dangerous, but Lu keeps repeating his excuses and Cookie goes along with him. Of course, when they’re found out, they have to go on the run to avoid capture (or even worse), but the movie’s ominous prologue and abrupt ending squelches any hope viewers might have about the fate of the story’s two lead characters. Thus, MOVIEGUIDE® thinks most moviegoers won’t enjoy FIRST COW enough to recommend it to their friends and relatives. Apparently, the movie’s “independent” writer/director, who’s made seven feature-length movies, still isn’t interested in whether many people actually see her movies, only one of which has made more than $1 million.