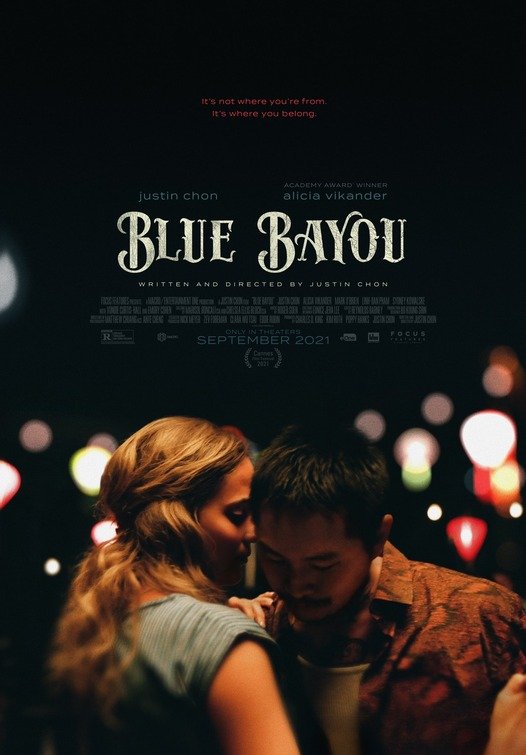 BLUE BAYOU is an emotional drama about Antonio, a married Korean-American man in Louisiana. Thirty years after being adopted by a white couple, Antonio is married to Kathy, a white woman with a young daughter named Jessie. Kathy is pregnant, and the family is struggling to make ends meet. An altercation with a police officer results in federal immigration officials starting a deportation order against Antonio. Apparently, Antonio’s adoptive parents, who died, didn’t file the proper documents. An immigration lawyer tells Antonio it will cost him $5,000 to fight the deportation order. Also, if he loses in court, he can never return.

BLUE BAYOU has multiple heartbreaking moments, especially at the very end. The movie is very well cast, but it is little Sydney Kowalske as Jessie who nearly steals the show. That said, the script could be tightened a bit. Despite the character conflicts, BLUE BAYOU ultimately is pro-family. Also, it takes a compassionate view of its flawed characters. However, BLUE BAYOU contains lots of strong foul language and some other immoral content. So, MOVIEGUIDE® advises extreme caution for mature viewers.

(B, Ro, Ab, LLL, VV, N, A, DD, MM):
Dominant Worldview and Other Worldview Content/Elements:
Light moral worldview that’s pro-family and compassionate, but marred by some Romantic, immoral elements
Foul Language:
91 obscenities (half or more are “f” words), six GD profanities, one light profanity
Violence:
Some strong, intense violence and light violence includes some men beat up a man, and he later staggers into a bayou and nearly drowns, the same man and a police officer have a struggle in a grocery store, woman tries to drown her infant son, but she changes her mind in the nick of time and clearly regrets the attempt as she clings to the baby afterwards, men smash a large display window at a motorcycle dealership and steal some cycles, woman hits bad guy multiple times when he’s handcuffed and about to be taken to jail, and woman dies of cancer
Sex:
No sex scenes or sexual immorality
Nudity:
Some naturalistic upper male nudity
Alcohol Use:
Brief alcohol use
Smoking and/or Drug Use and Abuse:
Cigarette smoking, and man appears to be smoking a marijuana cigarette in one scene, but it’s not totally clear; and,
Miscellaneous Immorality:
Some strong miscellaneous immorality overall includes stealing, lying, some family conflicts, and lead male character has tattoos and works in in a tattoo parlor.

BLUE BAYOU is an emotional drama about a married Korean-American man in Louisiana whose wife is pregnant who faces deportation when it’s suddenly discovered the white parents who adopted him failed to file the proper documentation. BLUE BAYOU has multiple heartbreaking moments, especially at the very end, but it’s marred by lots of strong foul language and some other immoral behavior.

The movie opens with Antonio, a married Korean-American man, being turned down for a mechanic’s job because he was found guilty of stealing motorcycles when he was a younger man. His very cute young stepdaughter, Jessie, sits next to him during the interview. Cut to Antonio and Jessie rushing to the hospital to see the ultrasound of his pregnant wife, Kathy’s, baby. They make it just in time. However, Jessie is worried he’ll forget all about her after she sees him cry while viewing the new baby girl’s ultrasound image. Antonio assures Jessie that he’ll love her just as much as the new baby, but Jessie is doubtful.

The movie soon reveals that Antonio and Kathy are low on money, which is why he was looking for a better job or a second job to replace or supplement his current job as a tattoo artist. Kathy’s previous husband, Ace, who’s now a police officer, abandoned her and Jessie after Jessie was born. So, Kathy got a divorce, including custody of Jessie, and subsequently fell in love with and married Antonio. Ace now, however, wants to re-establish a connection with Jessie, but Jessie considers Antonio her daddy after three years or so and adamantly refuses. So, Kathy respects Jessie’s feelings.

One day, Antonio and Kathy get in an argument at the grocery store about money, just after Ace and his partner, Denny enter the store. Ace and Denny overhear the argument, so they go to check it out. Denny is a hateful slob, so he goes overboard when he and Ace approach Antonio, Kathy and Jessie. It doesn’t take long for the confrontation between Denny and Antonio to get physical. Soon, Denny has Antonio on the ground and is hitting him with is nightstick.

Denny arrests Antonio for resisting a police officer, but when Kathy and her mother visit the jail to bail out Antonio, the police tell Kathy that Antonio’s been arrested by federal immigration officers. Antonio gets released, but an immigration lawyer tells them that, apparently, the white couple that adopted him failed to file the right paperwork to make Antonio a legal immigrant or citizen. The lawyer says the law was changed in 2000, but it wasn’t made retroactive. He tells them Antonio can return to South Korea and re-apply for legal status. However, if he goes to courtn and the judge rejects Antonio’s appeal, Antonio will lose any right to re-apply. Making matters worse, the lawyer requires a $5,000 retainer up front.

Where are Antonio and Kathy going to get $5,000? Kathy’s mother doesn’t have that kind of money at hand, and Antonio doesn’t want her to mortgage her house. He’s too prideful to get the money from her, partly because Kathy’s mother isn’t particularly fond of him anyway. Furthermore, Antonio’s adoptive parents are dead. Or, so he says.

Written and directed by Justin Chon, who also stars as Antonio, BLUE BAYOU is a problem picture that focuses on the plight of immigrants adopted before 2000. Federal immigration officials are deporting thousands of such adoptees because their parents didn’t file the proper forms or because the adoptees committed a serious violent or nonviolent felony. In the movie, Antonio has both problems.

BLUE BAYOU has multiple heartbreaking moments, especially at the very end. It turns out that Antonio is haunted by memories of his mother, who tried to drown him before she gave him up for adoption. His mother changed her mind at the last minute. In the bayous, Antonio has found a similar spot, and it’s become a spot that calms his troubled soul. In one scene, he shows Jessie the spot, and they spend a happy afternoon together there. Not even her mother knows about the spot, he tells Jessie.

If BLUE BAYOU were just about the conflicts among Antonio, Kathy, Ace, and Ace’s obnoxious partner, it would be a lesser movie. Antonio’s back story with his mother and his adoptive parents and his relationship with his stepdaughter, Jessie, give the movie added depth and poignancy. Also, a major twist that happens the day of Antonio’s court hearing increases the stakes in the story. In addition, the writer/director adds a poignant, but rather superfluous and melodramatic, subplot about a Vietnamese immigrant dying from cancer, which mirrors Antonio’s story about his birth mother. On the whole, the movie is very well cast, but it is little Sydney Kowalske as Jessie who almost steals the show. Jessie’s relationship with Antonio is the movie’s emotional core. Everything culminates in a powerful and dramatic, but bittersweet, ending that includes a very heartbreaking scene between Antonio and Jessie.

Despite the character conflicts, BLUE BAYOU ultimately is pro-family. Also, it takes a compassionate view of its flawed characters. Even Jessie’s biological father is shown in a positive light by the end of the movie. When his partner goes too far, for example, he tries to set things right, although he clearly waited too long to come back into Kathy and Jessie’s life. Despite this, BLUE BAYOU contains lots of strong, gratuitous foul language and other immoral content. For example, Antonio brings Jessie to the tattoo parlor where he works, and his co-workers don’t mind their tongue when she’s there. Also, he never gets caught for stealing some motorcycles to pay for the immigration lawyer’s fee. MOVIEGUIDE® advises extreme caution for this mixed content in BLUE BAYOU.