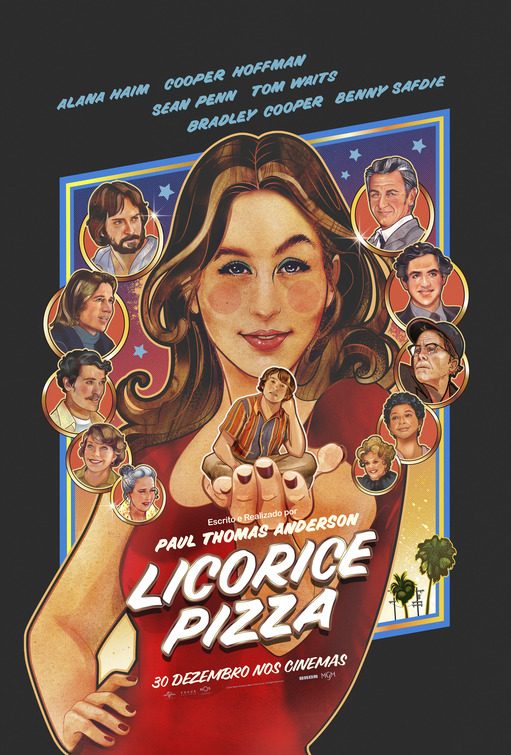 LICORICE PIZZA is a light romantic comedy set in Los Angeles in 1973. Gary Valentine is a 15-year-old child actor who develops a crush on Alana Kane, a 25-year-old photographer's assistant played by Alana Haim. Alana tells Gary she just wants to be friends. However, she accepts a job to chaperone Gary and other young actors on a trip to New York to perform on a TV variety show. Back in California, Gary pursues careers outside of acting, including opening a waterbed store and then a pinball arcade. Some comical, quirky adventures follow. Will romance ever blossom between Alana and Gary? Or, will they always remain just friends?

LICORICE PIZZA is well-acted and sometimes funny, with appealing characters. However, the story is too episodic, and the movie is overlong. Also, the movie has a mixed worldview containing pagan, Romantic, moral, and pro-capitalist content and behavior. LICORICE PIZZA is also marred by lots of strong foul language, one lewd comical scene and lewd lines of dialogue. Finally, a homosexual relationship is revealed between two minor male characters. So, MOVIEGUIDE advises extreme caution.

(Pa, Ro, H, B, CapCap, PC, Ho, LLL, V, S, AA, DD, M):
Dominant Worldview and Other Worldview Content/Elements:
Light mixed pagan worldview with some pagan, Romantic, and secular behavior, but some light moral elements such as young Jewish woman yells at her new Jewish boyfriend for claiming to be an atheist in front of her father at dinner when the father starts to lead a mealtime prayer, and some overt pro-capitalist elements, plus it’s revealed that a supporting character who’s running for mayor of Los Angeles has a secret homosexual lover, so the lead female character has an uncomfortable scene with them in a restaurant and drives the lover home, and there’s a light implied politically correct attitude toward this situation
Foul Language:
About 52 obscenities (including many “f” and “s” words), seven GD profanities and four light profanities, plus young Jewish woman crudely asks her Jewish boyfriend about being circumcised because he embarrassed her earlier at dinner when he told her father that he’s an atheist
Violence:
Light, sometimes comical, violence includes teenager takes golfclub and smashes windows of Ferrari because crazy absent owner threatened to kill his family, and reckless driving of truck backwards down a hill because the truck has run out of gas and man on motorcycle recklessly jumps a deliberately fire set on a golf course, and woman falls from the back of the cycle when he starts his run (no one’s really hurt in either incident)
Sex:
No depicted or implied sex scenes but there are a few crude sexual references (including a short scene involving several visual jokes when teenagers horse around), 25-year-old woman eventually kisses teenage boy, and a young male political candidate turns out to have a secret homosexual lover who complains about the candidate trying to keep their affair a secret, plus some innuendoes about selling waterbeds, and man suddenly flirts with two younger women he sees on the street
Nudity:
No nudity, but two or three girls wear bikinis in waterbed store, and father gets upset when his adult daughter comes home in a bikini
Alcohol Use:
Some alcohol use and drunkenness
Smoking and/or Drug Use and Abuse:
Brief smoking and one or two references to marijuana and a joke about LSD; and,
Miscellaneous Immorality:
Light miscellaneous immorality such as vandalism, crazy rich man threatens boy’s family if he messes up his house, while he’s delivering and filling a waterbed to the man’s fancy house, some reckless driving of a truck and a motorcycle, but no one is really hurt, and two cops mistakenly arrest a teenage boy for murder because he matches the description, but an eyewitness right away says the boy’s not the killer.

LICORICE PIZZA is a light romantic comedy set in Los Angeles about a 15-year-old actor in 1973 who begins a friendship with a 25-year-old photographer’s assistant, a friendship that may develop into something more, despite their age differences. Based loosely on some true stories, LICORICE PIZZA is funny and well-acted, but the story is too episodic and has a secular worldview with lots of strong foul language, one lewd comical scene and a few lewd lines of dialogue.

Cooper Hoffman, the son of the late actor Philip Seymour Hoffman, stars as Gary Valentine. Gary is a 15-year-old child actor whose claim to fame is playing in a movie about two widowed people who marry and form a large family. The movie in the movie is clearly based on the 1968 Lucille Ball and Henry Fonda family comedy, YOURS, MINE AND OURS. Gary’s character is loosely based on the life of actor turned successful film producer Gary Goetzman, who appeared in the 1968 movie and later became friends with the director of LICORICE PIZZA, Paul Thomas Anderson.

LICORICE PIZZA is set a few years in the future, however, to 1973 in Los Angeles and the San Fernando Valley. The movie opens with Gary at his high school on class picture day. At the school, Gary, who’s mature for his age, spies a girl, Alana King, who happens to be the assistant to the photographer. She tells Gary she’s 25-years-old, but he cajoles her to meeting him for dinner. At the dinner, however, Alana makes it clear she’s too old for him and tells Gary they’ll just have to be friends.

Alana still lives with her Jewish parents, and that seems to be a source of some tension within the family. Alana is always looking for work. So, she accepts a job to be one of the chaperones for Gary and the younger stars of the family movie, who are performing a musical skit on a TV variety show shooting in New York City.

The TV appearance doesn’t go as planned when Gary upsets the red-headed woman who starred in the movie. Back in California, Gary and Alana question their future. Alana starts dating one of the older costars in Gary’s movie, but she breaks up with him when he angers her Jewish father by saying he’s an atheist, even though he’s a circumcised Jew, when the father starts to pray before dinner.

Meanwhile, Gary’s acting career seems over, so he pursues careers outside of acting, including opening a waterbed store and then a pinball arcade. Alana even works for him at the waterbed store. However, when Gary shows an interest in two pretty teenage girls, she becomes jealous, even though she and Gary are still just friends. Unhappily, Gary’s waterbed store goes bust when the 1973 October oil crisis occurs, because waterbed skins are made of vinyl, which requires oil. After goofy encounters with Hollywood producer Jon Peters, who was dating Barbra Streisand at the time, and with an egotistic Hollywood actor, Alana starts working for a young politician running for mayor of Los Angeles.

Alana and Gary have drifted apart, but Gary gets the idea for opening a pinball arcade after a discussion he overhears while attending a campaign function. Gary invites Alana to come to the arcade’s grand opening, but she’s distracted by her political job and the candidate’s handsome face.

Will romance ever blossom between Alana and Gary? Or, will they always remain just friends?

LICORICE PIZZA is well-acted and funny, with appealing characters and quirky adventures. However, the story is too episodic, and the movie is overlong. The length wouldn’t have been a major problem if the plot was more cohesive and energetic. The movie is filled with quirky situations and humor that have nothing to do with Gary and Alana’s relationship. For example, at one point, while showing off his waterbeds at a small trade show, two cops suddenly arrest Gary for murder. Alana rushes after the police car carrying Gary, but when Gary gets to the police station lobby, a young man takes one look at Gary and says he’s not the killer. The man and the two cops disappear into the bowels of the precinct, leaving Gary chained to a couch in the empty lobby. Meanwhile, Alana stares at him from the sidewalk and wonders what’s happening.

LICORICE PIZZA has no really strong moral or spiritual themes. Instead, it has a mixed pagan, amoral, secular worldview. The two lead characters seem to have a Romantic, pagan view of life, though Alana comes from a Jewish home and breaks up with her new Jewish boyfriend because he says he’s an atheist. Despite Alana and Gary’s non-religious attitude, they don’t sleep around with other people. That doesn’t stop Gary, however, from making two or three lewd visual jokes about sex in one brief scene. Also, Alana eventually kisses the teenager at the end of the movie, although he’s officially a minor.

On a positive note, LICORICE PIZZA’s worldview is mixed with some moral, pro-capitalist elements. However, it’s marred by more than 60 obscenities and profanities, including many “f” words and seven GD profanities. There’s also a few miscellaneous lewd and crude sexual references, a reference to LSD, some drunkenness, and a minor male character who turns out to have a secret homosexual lover.

All in all, therefore, MOVIEGUIDE® advises extreme caution for LICORICE PIZZA. The filmmakers could have gotten a PG-13 rating, or even a PG rating, if they deleted all the strong foul language, the lewd content and the big age difference between the two leads. Cooper Hoffman, who plays Gary, looks a little older for his age, while Alana Haim, who plays Alana Kane, looks a little younger than her age. Gary Goetzman, the former child actor on whom Gary is based, has produced some MOVIEGUIDE® Award winners, including THAT THING YOU DO, MY BIG FAT GREEK WEDDING, POLAR EXPRESS, JOHN ADAMS, GREYHOUND, and NEWS OF THE WORLD.