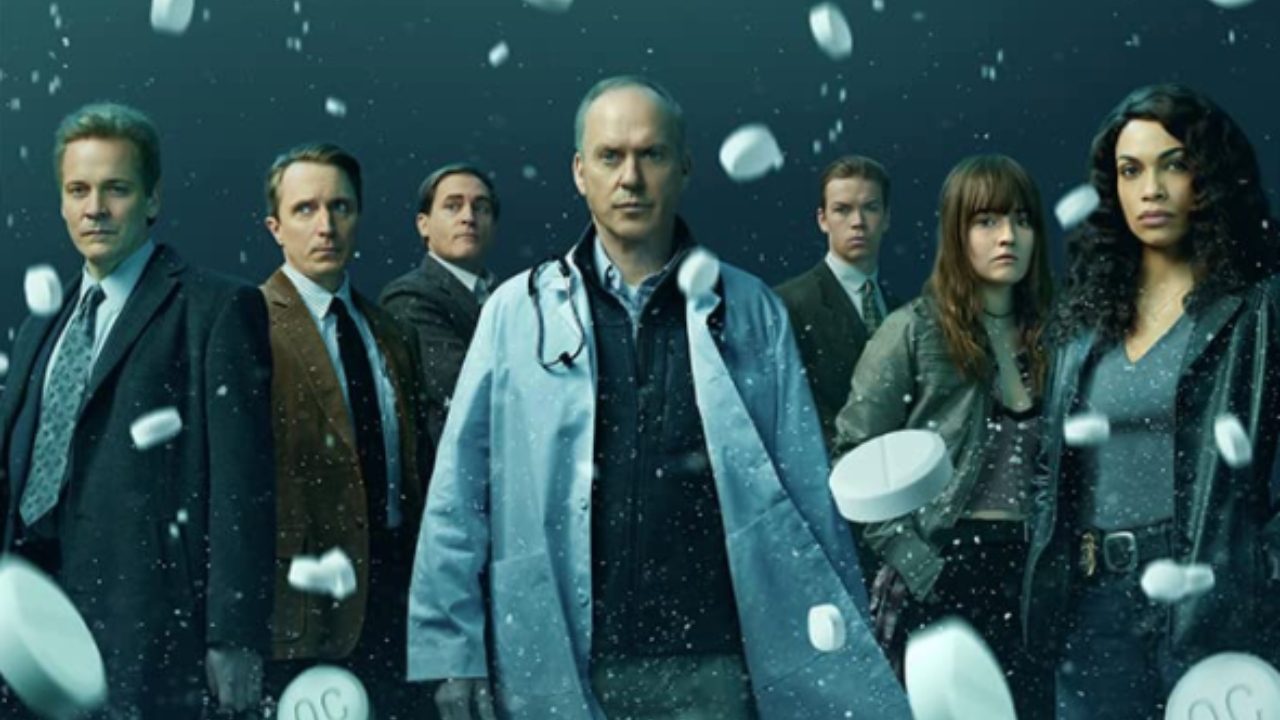 DOPESICK, a Hulu Original Series, premiered its first three episodes on October 13, 2021. The TV-MA series stars Michael Keaton, Peter Sarsgaard, Michael Stuhlbarg, Will Poulter, John Hoogenakker, Kaitlyn Dever, and that is just the tip of the iceberg for this large cast. The series is about the origins of the opioid Oxycontin and how it affected America right at its release. The series explores the story of a doctor and his patients, as well as the detectives who tried to take the drug company down.

The series is based off of a book by Beth Macy titled Dopesick: Dealers, Doctors, and the Drug Company that Addicted America. Other writing credits for the series include Danny Strong and Benjamin Rubin. DOPESICK is produced by Richie Kern and executive producers include John Goldwyn, Michael Keaton, Barry Levinson, Warren Littlefield, Beth Macy, Karen Rosenfelt, and Danny Strong.

DOPESICK follows three different timelines and multiple storylines that connect over a 20–year span from the 1980s to the 2000s.

The first storyline is the creator of the drug, Richard Sackler, who is part of the family that owns Purdue Pharma. He is under heat when his family believes his drug will fail when and that they cannot afford for it to fail. Meanwhile,  and he has hopes that it will be the biggest opioid in America — then the world. A few years later, Oxycontin is introduced to the market. At the start, the “miracle drug” is falsely advertised as being a safe and highly non-addictive opioid due to its time-release capabilities.

However, when they release the drug, the world starts to burn. People, people lose their jobs, lose their houses, crime increases, and addiction becomes rampant. Contrary to Purdue Pharma’s claims, the opioid is far from non-addictive.

Keaton’s Dr. Finnix, the is the primary health care provider doctor in a small mining town. When approached by a sales representative of Oxycontin, Finnix is hesitant to add Oxycontin to his list of recommended drugs. However, he notices that one of his patients seems to do well on the sample and begins to think Oxycontin could very well be the miracle drug they’ve been looking for. However, though, it is not long until Finnix realizes that the drug is just like other opioids, and he’s made a grave mistake in prescribing it to so many patients.

The timeline jumps ahead a few years later to detectives trying to remove Oxycontin from the market. They get help from a DEA agent, who has been focused on the case for years, but continued to hit dead ends. The three must find new ways to catch the untouchable Purdue Pharma. When they finally have enough evidence from victims including patients doctors and false advertisements, the case is taken to trial. Will they be able to take down Purdue Pharma for all of the chaos is has brought into the world?

The series has strong Christian worldview. In Finnix’s main timeline, the small town is filled with believers in Christ. The parents of Betsy, Dr. Finnix’s first patient to go on Oxycontin, are constantly praying at dinner, at night, and when their daughter is sick. Furthermore, the father sticks to his convictions when his daughter comes out as a lesbian. In addition to this, one of the detectives for the case is also a practicing Christian and offers to pray for his partner when he finds out he is having surgery for his prostate cancer.

There is a moderate use of foul language throughout the series. Some of this language is used to describe sex between two women. There is some violence, such as burglary, mugging, a mining accident, and a car accident. There is slight nudity when Finnix examines some of his patients’ injuries. There is some LGBTQ sexual content. There is also some spoken content about sex. There is heavy drug use for Oxycontin and the onset and exploration of the disease of addiction. This involves some scary scenes of the drug changing people and users having withdrawals. There’s also some other immorality, primarily how an addiction can start, what it looks like to have a withdrawal from the drug, and how opioids can change people. The series is filled with other immorality mostly including lying, especially from sales representatives selling Oxycontin and from Purdue Pharma.

Despite all of the immorality in the show, the quality is great. The cinematography is excellent and makes you want to keep watching. The timeline jumps, however, are disjointed. However, maybe it should have been considered to work with the techniques to differentiate the timelines more. The acting is incredible and the actors were really able to portray their characters well. Although, for some characters, there may be some over emphasis in accents that make it obvious they are being acted.

Movieguide® finds DOPESICK to require extreme caution for adult or to be too excessive to watch. Viewers who are sensitive to drug content are recommended to avoid the show completely.