Hollywood’s New Family Man: Behind the Scenes of DELIVERY MAN with Vince Vaughn 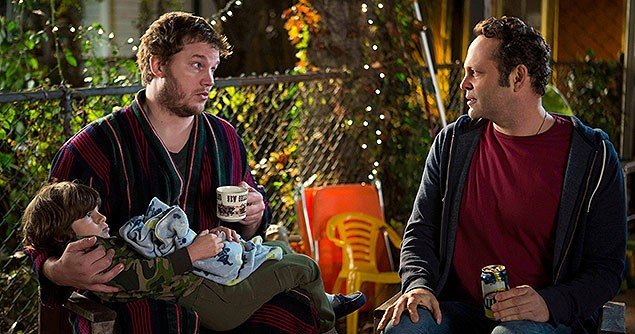 It’s rare that Hollywood offers a strongly pro-life message in movies, and even rarer to find a deep message of any kind in a movie starring Vince Vaughn, but with his new movie DELIVERY MAN (read the review here), Vince Vaughn moves beyond his long-beloved status as the fastest-talking wisecracker in comedy and finds surprising new depths as a man who suddenly learns that he’s about to be a father to one child and has already unwittingly been the father to more than 500 others.

DELIVERY MAN stars Vaughn as Dave Wozniak, a deliveryman for his family’s Brooklyn-based butcher shop. He’s a lovable slacker who racks up more parking tickets than timely deliveries, but he’s forced to grow up when his longtime girlfriend (played by Cobie Smulders of the CBS sitcom “How I Met Your Mother”) tells him she’s pregnant at the same time he’s hit with a class-action lawsuit from more than 140 people claiming he’s their biological father.

Turns out Wozniak spent a bit of time 20 years before making donations at a sperm bank, and the doctors there liked his contributions so much that they made more than 500 children from his efforts. (The movie discusses but doesn’t show any of the donation process, thankfully.) Now, 142 of the children are curious enough to want to meet him, and Dave has to decide whether to allow that to happen or not.

Dave’s solution is to pick a few of the now young people and enter their lives as a friend without them knowing his real status, and then see if he can handle the responsibility of knowing them. He quickly finds himself drawn to being a real-life guardian angel to them, setting off a chain of events meant to elicit both belly laughs and heartfelt tears.

“To me,” Vaughn said in an interview, “one of the things that’s so loving and warm in the film is you have all these people looking for connection, who want to be part of something, and the movie takes them on that journey. I’ve received some very nice notes from people already in the industry who have been adopted or had similar experiences and told me how the movie spoke to them.

“The kids in the movie are positive and loving and have light and joy in them,” he continues. “There’s something really wonderful in the connection they form. It’s nice to feel loved, and also it’s nice to have someone to love. That’s a great side of it as well.”

Vaughn’s speaking from experience, having made the transition from a freewheeling single life in which he was dubbed by some media as the leader of the “Frat Pack,” a group of actors including Will Ferrell and Owen Wilson with whom he co-starred in a seemingly endless stream of bawdy comedies in the middle of the last decade. He married Canadian real-estate agent Kyla Weber in 2010 and has since welcomed two children into his life.

While DELIVERY MAN had an impact on Vaughn, it also touched his co-star Smulders deeply. The mother of a 4-year-old daughter herself, Smulders says she could relate to her character’s concerns about whether her boyfriend could mature quickly enough to handle the whole new world of parenthood.

“Emma’s a very conflicted character as well,” Smulders says, “because she’s in love with this man, and wishes it wasn’t so challenging at times.

“If you’re single and just on your own together at the beginning that’s one challenge, but if you have a kid that’s a whole range of other issues to deal with and responsibilities. When it comes to parenting, how you grew up is often what you think is right, but we have a very different lifestyle here than I had growing up in Canada. Learning to be able to go with it and do the best for your child in each moment is the key.”

Vaughn grew up in the tony Chicago suburb of Lake Forest, Illinois, where his father was a salesman and his mother was a real-estate agent and stockbroker. After scoring a part in a Chevy commercial, he headed off to Hollywood, only to find that he struggled amid the sea of countless other actors vying for a big break.

That break finally came when he decided to create his own opportunity and teamed up with actor friend Jon Favreau to make the indie comedy SWINGERS in 1996. That’s where his fast-talking abilities were finally given a chance to flourish, and he was immediately cast by none other than Steven Spielberg for THE LOST WORLD:  JURASSIC PARK in 1997.

Even though he finally was noticed by Hollywood, Vaughn squandered the opportunity for a few years by shoehorning himself into dramas that hid his uniquely verbose charms. It wasn’t until OLD SCHOOL hit in 2003 that magic finally struck him for good, leading to a hot string of comedy hits that included DODGEBALL, WEDDING CRASHERS, THE BREAK-UP, FOUR CHRISTMASES, and COUPLES RETREAT… setting the stage for him to feel confident enough to settle down.

“You can’t help but change and for me it was just that I didn’t feel anything was missing in my life, and it wasn’t. It all came at the right time,” Vaughn says. “Now [when] I am absent from my son, I do feel something is missing. Before that, I was very fulfilled, having a lot of fun, sowing wild oats, and doing the kinds of things you should do when you don’t have kids, and now I’m doing less of that, but I earned it.

“Just spending quiet evenings with my wife and son or sitting in bed and watching him marvel over curtains in the morning is great,” Vaughn adds. “That feels good, and I’m impressed by his sense of wonder. The way I’ve changed is that I now have a whole new way to see the world, and things are exciting for me again. Sounds, smells, tastes, or how drawers open. Look at that, it’s really cool! You pull a knob and it slides and there’s things inside!”

That sense of wonder seems to carry over to the big screen throughout DELIVERY MAN.

With his wife and two children waiting for him at home, the 6’5” Vaughn gets up and heads for the door. Even so, he still has one more lesson to deliver.

“What I love about the film is that to me, a lot of it is about learning to accept who you are,” he says. “You have a lot of pressure to be different things, and we don’t all have all skills at all sizes. Getting to be OK with yourself, to forgive yourself, love yourself, and bring that to the table for relationships, whether romantic or family, or parents and kids, is key.

“There’s a lot of that in the movie, and I feel like, as we all watch the film is that as a parent it does deal with your hopes and fears for your kids. As a young person, they connect to the movie because of what they are confronted with every day:  I want to do this, but how do I get into this, or out of that? How do I change where I am? I think that’s something we all go through, but as we get older you get out of situations that aren’t your best and increase the things that you are enjoying.”

Even though DELIVERY MAN offers up a very funny, often touching and inspiring pro-life story of parental responsibility and doing the right thing, but there is some crude innuendo and language, which warrant caution. Read the full review here.