THERE WILL BE BLOOD

"Worst Anti-Christian Stereotype of the Year" 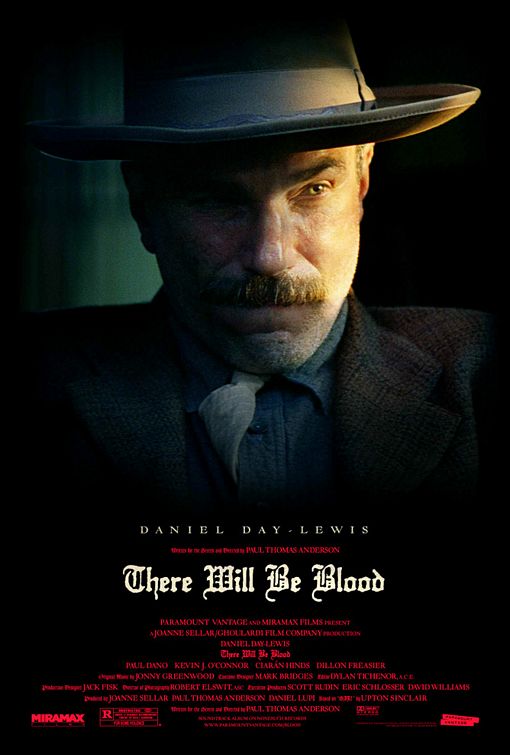 THERE WILL BE BLOOD opens in 1898 Arizona where Daniel Plainview, a struggling miner, strikes oil in the desert. His partner dies in the attempt, leaving Daniel with his infant son, H.W. Cut to 1911, where Daniel gets a mysterious tip there’s a town in the California desert with oil oozing out of the ground. Daniel buys land from Abel Sunday, but Sunday’s son, Eli, who heads a Pentecostal church, extracts a vague promise of $5,000 for the church. Daniel never gives the $5,000 and beats up Eli. An accident causes H.W. to lose his hearing. Daniel cruelly ships him off to a deaf school far away. Meanwhile, conflicts escalate between Daniel and Eli until everything comes to a head 20 years later.

THERE WILL BE BLOOD is not solely about religion, but it is one of the most anti-Christian movies of the year. That is abhorrent, not only because it is a vicious, mindless attack on Jesus Christ and those who follow Him, but also because Daniel Day-Lewis gives one of the year’s best performances. Not helping matters is Paul Dano’s shallow, unbelievable performance as the despicable preacher, Eli.

(RoRoRo, PCPCPC, AbAbAb, AcapAcapAcap, B, L, VVV, S, N, AA. D, MM) Very strong Romantic worldview with very strong, sometimes implied, politically correct anti-Christian and anti-capitalist content, including a very strong anti-Christian stereotype of a Pentecostal preacher, plus some light moral elements when men lead public prayers and worship (they might be insincere, however) and, implied, when greedy, prideful misanthropic businessman drives all people away, including his adopted son, and becomes a pitiable loathsome figure; five light obscenities, three strong profanities and one light profanity; brief very strong violence and strong other violence includes two men murdered (especially one man brutally beaten in one scene with blood), vicious slapping in two scenes, man pushes another man down into mud and then kicks him, men in wells hit on head by falling objects, fire in oil well is exploded with dynamite to stop fire, boy knocked unconscious and becomes deaf in accidental explosion, and arson; light implied sexual immorality in one scene where two men visit prostitute house and one man is heard laughing with girls off screen while other man looks on; brief upper male nudity; drinking and drunkenness; smoking; and, lying, cheating, greed, pride, arrogance, man forces preacher needing money to deny God several times, preacher forces man to get baptized, man turns on deaf adopted son, man reneges on deal, blackmail, and protagonist admits he hates most people and generally thinks the worst about others.

THERE WILL BE BLOOD is not solely about religion and theology, but it is one of the most anti-Christian movies of the year. That is a terrible shame, not only because it is a vicious, mindless attack on Jesus Christ and those who follow Him, but also because Daniel Day-Lewis gives one of the year’s very best performances playing the protagonist, a ruthless oilman living in the early 1900s. Not helping matters is that the oil man’s antagonist, a self-righteous Pentecostal preacher, is played so poorly by Paul Dano, who gives one of the worst, most caricature performances of the year. Naturally, many mainstream critics love this movie because they don’t mind poorly played negative stereotypes if they happen to be Christian preachers, Southern white sheriffs, or Republican politicians.

Based loosely on a novel by progressive writer Upton Sinclair, the movie opens in 1898 Arizona where a struggling silver miner strikes oil in the desert. His partner dies in the attempt, however, leaving Daniel with his infant son, H.W.

Several years later, in 1911, Daniel gets a mysterious tip that there’s a town in the California desert with oil oozing out of the ground. Daniel buys some land from Mr. Sunday, but Sunday’s baby-faced son, Eli, who heads a Pentecostal church, extracts a vague promise of $5,000 for Eli’s church. Daniel buys up more of the land, but refuses Eli’s request to lead a prayer over the first well. In fact, Daniel himself says the prayer. To make matters worse, Daniel never gives the $5,000 to Eli’s church and publicly beats up and humiliates Eli when Eli makes a pest of himself.

(SPOILERS) An accident at the well causes H.W. to lose his hearing, and Daniel cruelly ships him off to a deaf school far away. Daniel also has trouble when a man claiming to be his brother turns out to be a liar who stole his brother’s identity. Daniel secretly murders the man one night in the wilderness, but one of Eli’s supporters discovers Daniel sleeping next to the buried body. Eli forces Daniel to participate in a humiliating baptism ritual and finally gets the $5,000 from Daniel.

Eventually, Eli and Daniel’s pride, greed and animosity poisons their spiritual and economic lives and causes further problems between Daniel and his own son.

The realistic, gritty atmosphere created by screenwriter/director Paul Thomas Anderson and actor Daniel Day-Lewis as Daniel Plainview is tremendous. It is practically ruined, however, by Anderson’s evil caricature of Eli, the revenge-minded preacher, and the over-the-top, unrealistic performance of Paul Dano as Eli. In fact, THERE WILL BE BLOOD is one of the most mean-spirited, anti-Christian, superficial, and poorly played portrayals of religion ever created in movie history. God knows there have been plenty of insincere, sinful leaders in the Christian church, but there have also been many good Christians who have exposed and opposed such false leaders. The short length of most feature films often require stereotypes, even negative ones, to tell a good story, but when they are so mean-spirited, superficial and poorly played as this one is, they appeal only to narrow-minded bigots with an ax to grind, whose mental faculties and hearts have been poisoned by their sinful misanthropic prejudice.