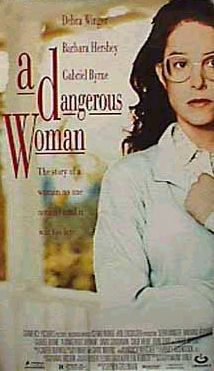 The "danger" in the movie A DANGEROUS WOMAN comes in the form of the fierce honesty of tiny, emotionally retarded Martha, portrayed by Debra Winger in an outstanding performance. Sadly, the superior acting job is squandered in a meandering story, murky morality, blunt depictions of sex, and unpleasant language.

The title A DANGEROUS WOMAN brings to mind expectations of gun-toting revenge, or lethal seduction. Instead, the “danger” in this film comes in the form of the fierce honesty of tiny, emotionally retarded Martha, portrayed by Debra Winger in one of the most outstanding performances of the year. Martha lives in the guest house of her aunt Frances, and Martha suffers harassment from the neighborhood children and certain grownups as well. Getting a job at a cleaners, Martha becomes a moving target for bullies and abusers, first by a co-worker, Getso, then by Mackey, a hired man, who takes advantage of her sexually. After much turmoil, disaster finally strikes when Martha must defend herself from Getso. Exasperated, she stabs him.

The movie has an uplifting conclusion, but it isn’t enough to salvage it from the numerous unpleasantries and moral quagmires which precede it. Also, no one in the film offers anything close to the caliber of Debra Winger’s performance, so that motivation and meaning are rather thin among the other players. No one is really strong enough to play effectively against Martha’s ferocious commitment to honesty. This is indeed unfortunate because this story could have supported much more interesting dramatic possibilities, not to mention more challenging moral conflicts, than the final product actually delivers.