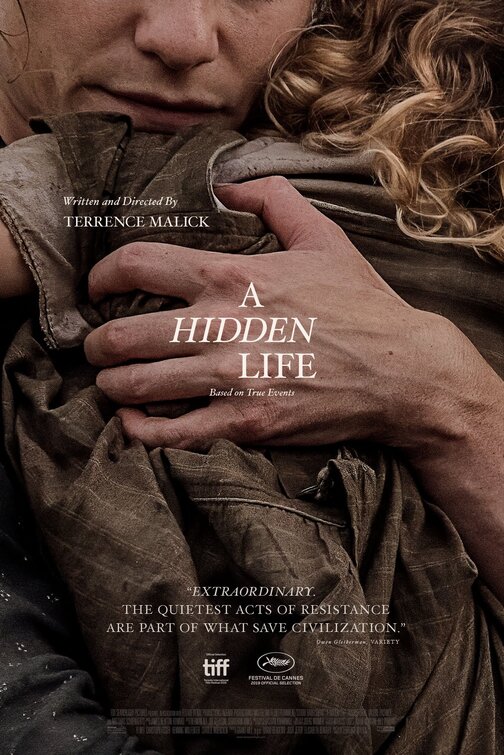 A HIDDEN LIFE is A Great Story of Christian Courage

It’s an impressionistic masterpiece honoring a steadfast servant of Christ and his loving wife. There is no strong objectionable content in A HIDDEN LIFE, although the movie is designed for mature audiences

A HIDDEN LIFE, directed by Terence Malick, is the true story of a devout Catholic farmer in World War II. The movie opens in 1939 with Franz Jägerstätter and his wife, Fani, tending their farm in Northern Austria. When Hitler annexes Austria, Franz serves briefly in the army in 1940 but doesn’t see any action. After Nazi Germany conquers France, people think the war will be over soon, but Hitler has other plans. Franz is called back to the army in 1943, but he refuses to fight on the front lines and refuses to sign a loyalty oath to Hitler.

A HIDDEN LIFE is one of the great love stories and a great story of Christian courage. The movie is filled with positive references to Jesus, God, faith, and Scripture. Beautifully photographed, with no real objectionable content, A HIDDEN LIFE is a powerful tribute to steadfast Christian faith confronting great evil. Nearly three hours long, the movie moves at an unhurried pace and avoids lots of dialogue. However, A HIDDEN LIFE is an impressionistic masterpiece honoring one Christian man and his loving, loyal wife.

(CCC, BBB, ACACAC, V, AA, D, M):
Dominant Worldview and Other Worldview Content/Elements:
Very strong Christian, biblical, moral worldview about an Austrian conscientious objector and devout Roman Catholic man during World War II who refuses in 1943 to serve in Hitler’s German army and refuses to sign a loyalty oath to Hitler, with over references to God, Jesus, faith, and Scripture, including Matthew 6 and Psalm 23, plus movie is very strongly opposed to the violent tyranny of Hitler’s National Socialist party
Foul Language:
No foul language
Violence:
Light violence includes a couple men fight with their fellow townsman because he refuses to join Hitler’s fighting army, a prison guard repeatedly pulls a chair out from under the protagonist after commanding him to sit down and then stand back up after he falls, and there are implied executions through a guillotine machine (nothing shown)
Sex:
No sex scenes or content, but some marital kissing and married couple often lie down in the grass with the man’s arm around his wife, plus images of the couple’s bed and bedroom, which is surrounded by Christian symbols, so it’s clear this is truly holy matrimony
Nudity:
No nudity
Alcohol Use:
Light beer drinking and men, one man in particular, seem drunk in a couple scenes, but the drunkenness isn’t celebrated
Smoking and/or Drug Use and Abuse:
Brief smoking but no drugs; and,
Miscellaneous Immorality:
Catholic church officials acquiesce to socialist tyranny, and villagers shun man and his wife when he starts criticizing Hitler and his National Socialist regime.

A HIDDEN LIFE, directed by Terence Malick, follows the true story of an Austrian farmer and his family during World War II, whose lives are turned upside down when the farmer, a fervent Catholic, refuses to pledge loyalty to Adolf Hitler because of the farmer’s strong Christian beliefs. Beautifully photographed, with extremely little objectionable content, A HIDDEN LIFE is a glorious, emotionally powerful tribute to steadfast Christian faith confronting great evil. Though it’s nearly three hours long and moves at an unhurried pace that avoids lots of dialogue, A HIDDEN LIFE is an impressionistic masterpiece honoring one Christian man and his loyal, loving wife.

A HIDDEN LIFE is based on actual personal letters and other historical documents. The movie opens in 1939 with the farmer, Franz Jägerstätter, and his wife, Franziska, or Fani for short, tending to their cow and wheat fields in the quiet small farming village of St. Radegund, which nests comfortable next to beautiful mountains in Northern Austria near the German border. Scenes show the happily married couple using scythes to cut the wheat and lying down in the grass to enjoy one another’s company while their three young daughters play nearby. Their third daughter is a toddler who’s just beginning to walk.

In 1940, Franz is called up to basic training, a requirement for all Austrian men. He is away from his beloved wife and children for several months but doesn’t see any action. Eventually, when France surrenders, and it seems the war might end soon, the Nazis send Franz back home. His mother and sister-in-law have come to live with them, and for a while things seem to go on as normal. Everyone begins to think that peace will soon occur.

However, the war escalates, and Franz reads reports about the evils that the Hitler’s National Socialist forces are committing in Europe, Russia and elsewhere. Franz increasingly makes his opposition to Hitler and the Nazi Party known. This causes tension between him and the other townspeople.

Finally, in 1943, Franz is called up to fight. The first requirement of a soldier at that point was to swear an oath of allegiance to Adolf Hitler and the Third Reich. Despite pleas from his neighbors, his priest, the local bishop, and his fellow soldiers and commanding officers, Franz refuses the oath because it goes against his Christian faith and because he believes his faith demands that he publicly object to Hitler and the Nazi regime. With his quiet act of resistance, he asks, “If leaders are evil, what does one do?” So, Franz refuses to fight and refuses to sign the loyalty oath, even though it means he probably will be executed.

In a dream, he has a vision of a beautiful train rolling around the countryside and attracting many passengers, including children. However, in the dream, Franz realizes the train is going to Hell. So, there’s no way Franz wants to get on that train.

Meanwhile, Fani is left to deal with the aftermath of her husband’s decision. Not only is she now the caretaker of the family’s farm as well as their three young daughters, Fani is ostracized from her community. Fear of Hitler forces once kindly neighbors to turn their backs on Franz, Fani, their children, Franz’s mother, and Fani’s sister.

However, Franz finds strength in Fani’s love and support, and in the love and devotion of his beautiful young daughters. He’s imprisoned in March. Franz and Fani are allowed to write letters to one another once a month, and it’s clear from voiceovers reading the letters that the letters give them both strength and that Franz remains opposed to signing the oath and serving on the front lines.

In May, Franz is sent to a prison in Berlin. There, his case finally goes to trial. His lawyer, the prison priest, and even a few government and military representatives plead with him to pretend to disavow his opposition to the loyalty oath. They think they can get him a position in a military hospital as a conscientious objector, but he still has to sign the oath. Will Franz sign the oath, even when his wife travels to Berlin to see her husband one more time as the date of his execution nears?

A HIDDEN LIFE is one of the great love stories of all time. Although the movie doesn’t show this, before he married Fani, Franz was a wild young man, like some of the other young men in his village. According to a biography, his neighbors say Franz was “a different man” after he married Fani. The movie shows Fani sticking by Franz throughout his emotional ordeal with the German authorities. The movie also shows the love that Fani and Franz had for one another and for their three daughters.

A HIDDEN LIFE is also one of the great stories of Christian courage. Franz refuses to betray his faith in Christ, unlike the Catholic church leaders in Austria who urged Austrians to ratify Hitler’s annexation of Austria in a plebiscite. Franz voted no, but his vote was left unrecorded by the village for fear that recording even one no vote would endanger the village and its citizens. Franz tries to get support from local Church leaders, but they are too fearful. They tell Franz that, if the Germans eventually execute him, it won’t do anyone any good.

A HIDDEN LIFE is nearly three hours long. Like many of Terrence Malick’s movies, it moves at an unhurried pace and avoids using lots of dialogue. So, there are scenes of Franz spending time silently with his wife looking at the mountains, tending to their farm, playing blind man’s bluff with his children, traveling to prison and spending time in prison, praying silently, being questioned and harassed by prison officials, and enjoying the company of an old army buddy who’s also just been imprisoned. These scenes are interspersed with narration from the letters Franz and Fani send back and forth to one another. The letters include many statements of faith and references to important biblical passages that inspire Franz to stand up to the tyrannical Nazi authorities.

Ultimately, the movie’s measured pace leads to emotionally powerful scenes of steadfast Christian faith confronting great evil and expressions of love between Franz and his wife, and of Franz telling Fani to make sure she tells their daughters how much he loves them. The scene where Fani visits Franz one last time at the Berlin prison is heartbreaking.

A HIDDEN LIFE is a glorious tribute to Christian faith standing against tyranny. It’s an impressionistic masterpiece honoring a steadfast servant of Christ and his loving wife. There is no strong objectionable content in A HIDDEN LIFE, although the movie is designed for mature audiences. The movie contains no strong foul language, no obscenities and no bloody violence. The only real violence is a scene where a man in the village square starts a fight with Franz because of Franz’s criticism of Hitler’s Nazi regime.