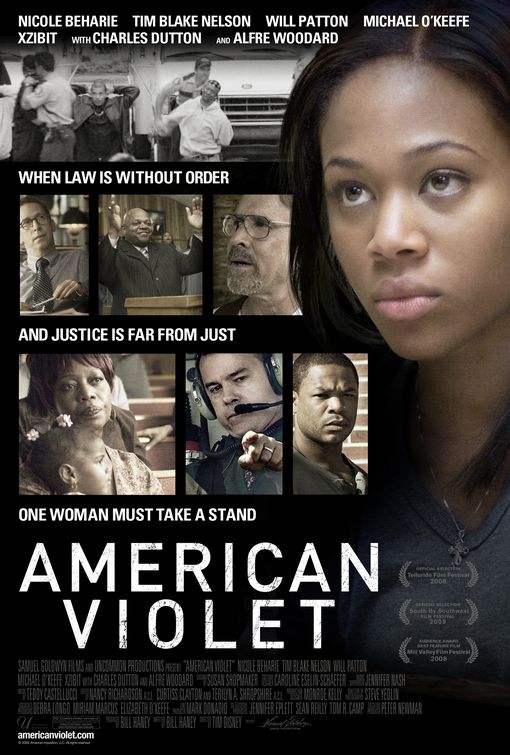 AMERICAN VIOLET is based on a true story about a black woman in a small Texas town falsely arrested in 2000 during an annual anti-drug raid on the black community by the allegedly racist county district attorney. The plot begins in November 2000 when the local DA in a small Texas county conducts his annual raid on illegal drug sales in the black community. A young single mother, Dee Roberts, is arrested at her waitress job. Eventually, the charges against Dee are dropped because the story of the one informant proves to be very shaky. An ACLU representative, however, hires a local white lawyer. They convince Dee that she should bring a civil suit against the County and the DA to stop the raids, which seem to be racially motivated.

AMERICAN VIOLET is an inspiring movie that sometimes focuses on the heroine’s Christian faith, though it stays away from doing any actual evangelism. It contains plenty of foul language, however. Also, a written epilogue suggests that high incarceration rates among blacks in America are due to racism and legal injustice instead of a lack of Christian faith and morality.

(CC, BBB, PC, So, LLL, V, A, DD, M) Strong Christian worldview (including scenes with people praying, but mostly silently) with very strong moral elements about fixing a case of injustice in Texas, including troubled heroine who has allegedly turned her life around through her faith, but some politically correct socialist conclusions that distort the situation in America’s criminal justice system and the movie makes some vague politically correct allusions between the case in question and President George W. Bush, apparently because Bush was governor of Texas and the events in the movie began during the 2000 election brouhaha; 36 obscenities (including about three “f” words), three GDs and three light exclamatory profanities (such as G-d!); light violence includes yelling and damaging objects, mostly implied beating of man by police, people arrested by police during massive anti-drug raid with suspects forced to lie down on asphalt and police busting down doors in apartment complex that looks like a renovated motel of some kind, and angry woman kicks truck, hits truck window and splashes red paint on truck; no sex scenes but single unwed mother has four daughters from three men (two are in prison) and is upset about third boyfriend of two of the daughters who is now living with a woman accused or convicted of child molestation so there are light verbal references to the woman’s evil actions; no nudity; alcohol use; smoking and references to drug sales and such but no depiction or glorification; and, lying, corrupt officials, racism, and corrupt officials intimidate people with less power.

AMERICAN VIOLET is based on a true story about a black woman in a small Texas town who was falsely arrested in 2000 in an annual anti-drug raid on the black community by the allegedly racist county district attorney.

Extremely effective and inspiring, the movie nevertheless takes the words “based on a true story” to one extreme by trying to tar President George W. Bush with the DA’s apparent crimes of racial discrimination. It also tries to indict the whole justice system, including the country’s war against drugs. This broader purpose is less successful, but many viewers may still be fooled indirectly into supporting false liberal solutions to crime, poverty and the war against drugs in America that have never worked before and won’t work in the future.

The story opens in November 2000 when the local DA in a small Texas county conducts his annual raid on illegal drug sales in the local black community. A young single mother named Dee Roberts is arrested at her waitress job.

Dee thinks she’s been arrested because of her many parking tickets, but is shocked to hear she is being charged with selling drugs. The judge doesn’t listen to her defense, and sets bail at $70,000.

Despite advice from her court-appointed attorney, who says she can get out with only probation, Dee refuses to plead guilty to something she didn’t do. Eventually, based on testimony from people who know her character, Dee’s bail is reduced to $10,000. When the story of the single informant who led to the raid proves to be very shaky, charges against Dee are dropped.

An ACLU representative, however, hires a local white lawyer. They convince Dee that she should bring a civil suit against the County and the DA to stop the raids, which seem to be racially motivated.

AMERICAN VIOLET is an inspiring, moving story that sometimes focuses on the heroine’s Christian faith, though it stays away from any actual evangelism. The acting is awfully good, although the movie sometimes plays like a television movie. There is also plenty of foul language (some of it strong) that warrants extreme caution.

The testimony and the settlement in the original case are sealed, but the original complaint document makes a strong case that the DA in question was indeed, apparently, guilty of using racial epithets while conducting his annual anti-drug raids on the black community. Thus, it seems right that the movie highlights this particular case, which not only resulted in an end to the heavy-handed drug raids on an entire community of one race but also resulted in Texas law being changed to now require two informants rather than just one. In fact, an Internet interview with the original woman in the case, Regina Kelly, shows her to be an articulate, convincing and reasonable young woman.

The original arrest occurred in 2000 during the presidential election and its crazy aftermath that year. Regrettably, the movie unfairly tries to connect the case with President George W. Bush becoming president after the infamous electoral dispute of that year. In actual fact, of course, studies by independent newspapers, including USA Today, show that Bush actually won the 2000 race fair and square. Other studies also show that, like the elections in 2004 and 2008, the national “news” media tried to suppress Republican votes around the country and even on the day of the election in later time zones.

After the last scene, the movie also makes a big deal, in a written epilogue, that 2.3 million people are in prison now in the United States, most of them black males, and that 90% of the convictions against alleged criminals are the result of plea bargains. Thus, the movie implies that the whole American justice system is racist.

Though factually accurate regarding the number of black prison inmates and the percentage of plea bargains, this charge in the epilogue, which is often made by civil rights activists and more radical activists, does not hold water.

Heather MacDonald, a fellow at the Manhattan Institute, has written an article titled “Is the Criminal-Justice System Racist? No: the high percentage of blacks behind bars reflects crime rates, not bigotry.” MacDonald notes, “The race of criminals reported by crime victims matches arrest data.” In fact, African Americans commit more than 52% of the murders in the U.S., according to U.S. government statistics. Also, contrary to this movie, the vast majority of black offenders in prison are there because of violent crimes and property crimes, not drug offenses. Blacks tend to have longer criminal records than whites, MacDonald adds, so they tend to get tougher sentences. Even so, she writes, “A 1994 Justice Dept. survey of felony cases from the country’s 75 largest urban areas discovered that blacks had a lower chance of prosecution following a felony than whites did and that they were less likely to be found guilty at trial.” Finally, increases in prison sentences for all criminals, starting especially in the 1990s with “three strikes laws” and even stiffer mandatory sentences, have indeed led to significant decreases in crime rates.

This last note suggests that putting even more criminal suspects behind prison bars would reduce crime rates even further. Be that as it may, the fact is that crime creates poverty in the inner city, not vice versa. The high percentages of unwed mothers and never-married single mothers are another reason for crime and poverty, as is the forcible takeover of education by ignorant, selfish socialist bureaucrats in the local, state and federal government.

Please be careful, therefore, when watching movies like this one that try to make broader, politically radical conclusions from a leftist viewpoint while portraying a single case of legal, political or economic injustice. Whether the injustice is real or imagined, viewers should always research and analyze the facts presented in the movie before they let the movie affect their thinking on an issue.